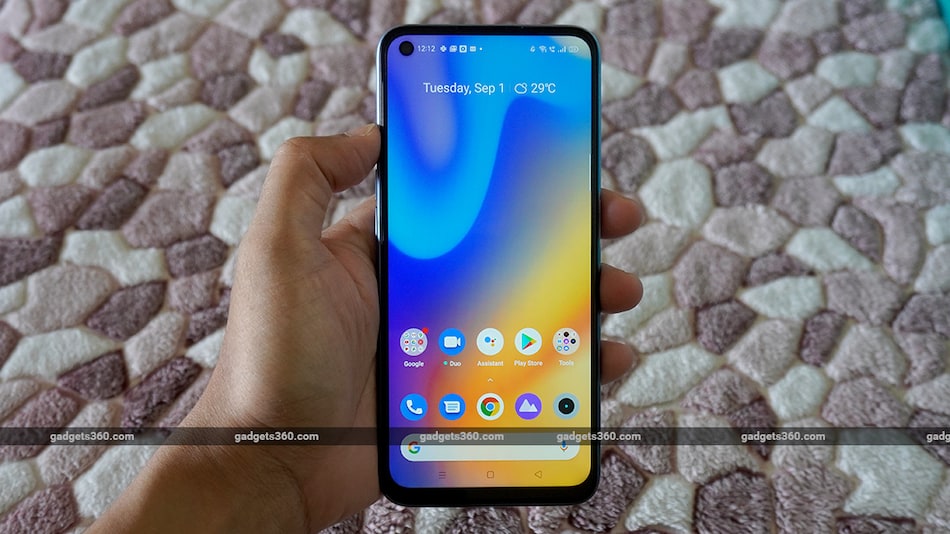 Realme has launched its new 7 series, which for now includes the Realme 7 and the 7 Pro. For today's review, we'll only be looking at the Realme 7, which will eventually replace the current Realme 6 (Review) smartphone. The latter brought in segment-first features such as a hole-punch display and a 90Hz refresh rate when it launched back in March this year, and till today, remains the only option around Rs. 15,000 that offers a high-refresh-rate screen.

The Realme 7 has some pretty big shoes to fill, and it's time to see how much has actually improved over the Realme 6. From my perspective, the Realme 7 brings in three main upgrades — a new SoC, a bigger battery, and a new primary camera sensor. Let's see if these upgrades are enough to make it worth recommending.

No new Realme smartphone is complete without a fresh design for the back. The Realme 7 features a mirror-split design, which creates some interesting patterns when light hits it. The colour option I have is called Mist Blue, but there's also white. The rear camera module now has a slightly different design, compared to the Realme 6. Overall, the Realme 7 looks fresh and new from the back, which the company desperately needed since the rest of the phone hasn't changed much.

Side by side, the Realme 7 looks practically identical to the Realme 6. The placement of the buttons, fingerprint sensors, SIM trays, and all the ports at the bottom on both phones is pretty much the same. The Realme 7 is actually thicker (9.4mm) and heavier (196.5g) than the 6, due to its larger battery, and this is very noticeable in daily usage. One-handed texting or photography can get fatiguing really quickly due to the additional weight.

Ergonomics aside, the Realme 7 feels well-built and sturdy. It still uses plastic for the frame and back panel. The SIM tray has three slots for two Nano-SIMs and a microSD card. The display appears to have been lifted straight from the Realme 6. It's a 6.5-inch full-HD+ LCD panel with a hole-punch cutout, and Gorilla Glass 3 for scratch protection. Realme has stuck to the 90Hz refresh rate from the 6. The display can get very bright, and colours are nicely saturated. I noticed some minor off-axis vignetting in the corners when displaying lighter backgrounds, but this isn't worth fussing over.

Overall, the Realme 7 feels solidly built for a budget phone. However I'm not too happy about the increase in weight, which definitely makes it more cumbersome to use on a daily basis. The box contents are what you'd expect, including a 30W fast charger, a USB cable, and a case.

The Realme 7 is the first phone to debut with the MediaTek Helio G95 SoC. This is an updated version of the Helio G90T, which was seen in the Realme 6, but it's not a major upgrade. The only real change is that the integrated Mali-G76 GPU now has a higher clock speed of 900Mhz, versus 800MHz in the G90T.

The rest of the SoC's specifications seem identical. It's still a 12nm octa-core chip, with two Cortex-A76 performance cores that can run at up to 2.05GHz, along with six Cortex-A55 efficiency cores with a maximum clock speed of 2GHz. In theory, we should see slightly better numbers in gaming benchmarks, but overall, performance shouldn't be all that different from the Realme 6.

The Realme 7 has a side-mounted fingerprint sensor

Performance is pretty satisfactory. The Realme 7 uses Realme UI, based on Android 10, which worked smoothly. Face recognition and the side-mounted fingerprint sensor are also quick. Navigating through the interface felt snappy on the 8GB RAM variant that I had. Apps were generally quick to load, and that 90Hz refresh rate made scrolling through menus feel smooth. There's also a good selection of live wallpapers and plenty of utilities such as Smart Sidebar, a built-in screen recorder, and several gestures and shortcuts.

The Realme 7 is good with games too. Battle Prime looked great at the highest graphics settings and gameplay was smooth. Racing titles such as CarX Drift Racing 2 also offered a good experience. The Game Space app helps organise all your games in one place and lets you easily access things such as screen recording and WhatsApp messages while playing.

A quick look at some benchmarks confirms that the new Helio G95 SoC is only marginally faster than the Helio G90T. In CPU benchmarks such as Geekbench, the Realme 6 surprisingly posted higher scores compared to the 7, even after multiple tries. However, the Realme 7 did post slightly higher numbers in some of the other benchmarks such as AnTuTu and GFXBench.

The Realme 7 supports two Nano-SIMs and a microSD card

The Realme 7 didn't get too hot when stressed. I noticed a bit of heating around the rear camera module but that was it. Realme says it has used a carbon fibre cooling system in the 7, which seemed to do its job well.

Watching videos was a fairly enjoyable experience on the Realme 7. You don't get any frills like HDR support but it does handle the basics well. The speaker on the bottom gets loud but I found its quality to be quite average.

The Realme 7 gets a chunky, 5,000mAh battery, which is a big upgrade over the 4,300mAh capacity of the Realme 6. Even with medium to heavy usage, I easily got a day and half of runtime on one charge. For some perspective, the Realme 7 ran for a little over 24 hours in our HD video battery loop test, which is excellent.

Thankfully, you can charge the battery fairly quickly too. The Realme 7 supports 30W Dart Charge fast charging, which can take it from zero to 100 in about 65 minutes. In case you don't have Realme's charger handy, you can also use 15W USB-C Power Delivery fast charging.

The primary rear camera on the Realme 7 is the only one that's new, compared to the Realme 6

Realme 7 cameras: Alright, but could be better

The third big change in the Realme 7, compared to the 6, is the primary rear camera. It's still 64 megapixels, but Realme has switched to the Sony IMX682 sensor, instead of the Samsung GW1 sensor. Realme also says it's using a new “ultra high definition” algorithm for the 64-megapixel mode, which promises better clarity and detail compared to the sensor on the Realme 6.

Let's see this for ourselves. Here are two 64-megapixel photos taken with the Realme 7 and 6. If we zoom in all the way to a specific portion of the buildings, we see that the Realme 6 captured a cleaner image with less grain, but textures are heavily smoothened. The Realme 7 retains better textures, but at the cost of having some grain in the photo.

However, when shooting in the default photo mode, there's a noticeable improvement in pixel-binned images captured by the Realme 7. It exhibits improved dynamic range and exposure, with better details compared to the Realme 6. Low light photos look cleaner too, with less grain. Shots captured using Night mode look more pleasing, compared to what the Realme 6 can produce. Overall, the new sensor is slightly better than the old one, and that's never a bad thing.

The Realme 7 does a good job with close-ups too. Details and colours were often very good and the autofocus worked well. However, the rest of the cameras are very similar to what we've already seen on the Realme 6, in terms of specs as well as the types of photos you can expect.

The ultra wide-angle camera captures a wider perspective but details and colours are weaker compared to the main sensor. This is more prominent once you begin cropping the photo. Portrait shots generally looked good, and you get the option to adjust the background blur before shooting. The 2-megapixel macro camera is not great, and even photos taken in broad daylight look quite poor.

I found the 16-megapixel selfie camera to be strictly okay. Selfies taken during the day looked decent, but HDR could have been handled better. Portrait mode is useful as it manages to correctly crop out the background. In the evening or night, you can get usable selfies provided there are bright enough light sources around. Night mode is available, but selfies looked over-sharpened in my experience.

The Realme 7 can shoot videos at up to 4K, but without stabilisation. Colours are a bit on the warmer side. Videos shot with the ultra-wide angle camera are stabilised but details are poor and the resolution is limited to 1080p. Ultra Steady mode offers the best stabilisation but the frame is heavily cropped and footage looks a bit soft. Videos shot in low light look grainy and details are weak. I'd say don't even bother recording with the ultra wide-angle camera and just stick to the main one in low light.

Verdict: Should you buy the Realme 7?

The Realme 7 isn't a major update over the Realme 6, but it's a good enough refresh with its larger battery and better primary camera sensor. Overall performance is very good, battery life is excellent, and the 90Hz display makes general usage feel smooth and fluid. The Realme 7 also looks great but it is heavier and thicker than the Realme 6, and video recording quality in general could have been better. At a starting price of Rs. 14,999, it offers good value.

I think Realme 6 owners need not worry about upgrading, as there would be little to gain with the Realme 7. The base variant of the Realme 7 is however a decent pick at its price for those who want a high refresh rate screen and have a tight budget.