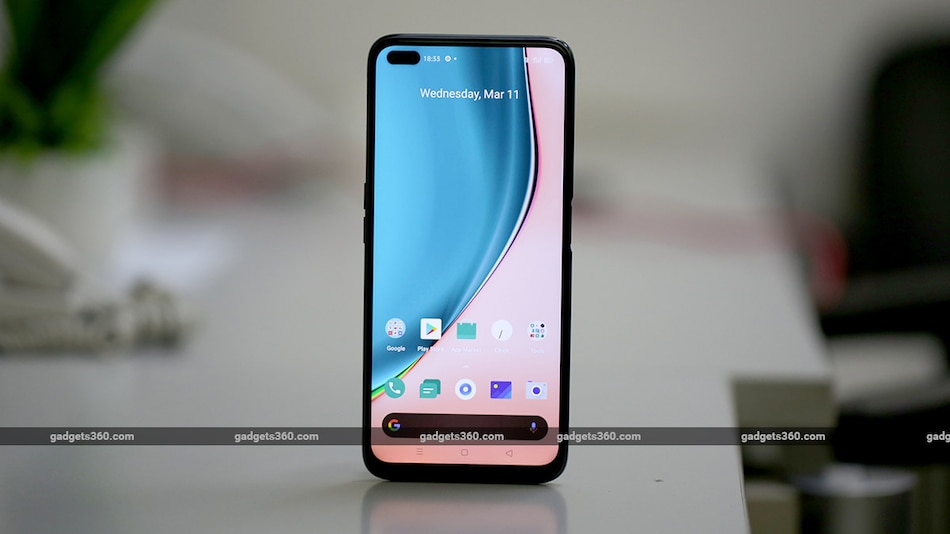 Of late, Realme has been refreshing its smartphones at a rapid pace largely so it can have a leg up over Xiaomi. While this does give consumers a lot of choice, it can be annoying for someone who's just bought a Realme device, knowing that there's already something newer and better out there. Realme has now refreshed its primary numerical series one again, with the Realme 6 (Review) and the Realme 6 Pro succeeding the Realme 5 (Review) and 5 Pro (Review) smartphones.

The Realme 6 has proven to offer excellent value for money, with premium features such as a 90Hz display, a powerful processor, and a 64-megapixel main camera. The 6 Pro, which we'll be reviewing today, starts at a slightly higher price but you get the brand new Qualcomm Snapdragon 720G SoC, a secondary wide-angle front camera, a telephoto rear camera, and some additional software features.

With every new model, Realme changes the design of the back, and for the 6 Pro, we now have a lightning-inspired design in either blue or orange. It looks quite funky and isn't too flashy, which we like. The glossy finish of the back makes this phone very slippery but thankfully it's Gorilla Glass 5, so scuff marks weren't really an issue. The Realme 6 Pro is quite chunky at 8.9mm and a bit heavy at 202g.

The front is where we have the biggest change, compared to other Realme phones in this price range. The Realme 6 Pro features a 6.6-inch LCD display with a dual hole-punch cutout, which gives this phone a modern appearance. The cutout is in the upper left corner of the display and isn't too distracting. There's Gorilla Glass 5 here too, but Realme also ships this phone with a screen guard pre-applied.

The layout of the buttons and ports is familiar, however, the power button has been flattened in order to accommodate a fingerprint sensor. We don't mind this design choice, as the button lines up nicely with your thumb when holding this phone with your right hand. Left-handed users would probably prefer a fingerprint sensor on the back, though. There's no in-display fingerprint sensor since Realme hasn't' used an AMOLED panel. The SIM tray on the left has slots for two Nano-SIMs and a microSD card.

The Realme 6 Pro doesn't have a large protrusion for the camera module at the back, and the four cameras are lined up in a similar fashion as on the Realme 6. Overall, we feel that Realme has done a good job with build quality, but the 6 Pro has nothing that we haven't seen before. The company also claims that there are three layers of waterproofing on this phone, which should help it survive splashes of water even though there's no official IP rating.

Realme is trumpeting the fact that the Realme 6 Pro is the world's first phone to feature the Snapdragon 720G mobile platform. In Qualcomm's lineup, it logically sits one step below the Snapdragon 730G, which we've recently seen do well in games and battery efficiency. The Snapdragon 720G shares some common traits such as the 8nm fabrication process, Adreno 618 GPU, a cluster of six Kryo 470 CPU cores, and the Snapdragon X15 LTE modem.

Where it differs is in the main CPU cluster, which consists of two Kryo 465 CPU cores, compared to two Kryo 470 cores in the Snapdragon 730G. Since this is a newer chip, it does also have a few advantages over the Snapdragon 730G, such as support for Bluetooth 5.1, NavIC satellite navigation, and a more power-efficient Sensing Hub.

The Realme 6 Pro has a side-mounted fingerprint sensor

Just like the Realme 6, the 6 Pro runs on Realme UI, which is essentially a version of ColorOS 7 for Realme phones. It's based on Android 10 and our unit had the February security patch. Realme says it will be adding two new apps in a software update in the near future, called Doc Vault, and Soloop. Doc Vault is supposed to offer a quick and secure way to access your personal information and government documents, such as PAN and Aadhar card details, vehicle registration numbers, etc. Soloop is supposed to be a video creation tool, which will offer templates to quickly create mini movie clips.

The rest of the features are very similar to what we've just seen in the Realme 6, and you can read about them in our review right here. You get many pre-installed apps with the 6 Pro but most of them can be uninstalled. We didn't face any issues with spammy notifications from the stock apps, and what little did come through, we managed to disable most of them from the respective app's settings.

The Realme 6 Pro is a bit thick, with a similar camera layout as the Realme 6

The Snapdragon 720G is a powerful chip, so as expected, general usage and multitasking was handled superbly. The 90Hz refresh rate makes usage feel smooth, and the good thing is that there's an Auto option, which means it automatically scales down to 60Hz to conserve power if an app can't benefit from a higher refresh rate. Even though this isn't an AMOLED panel, we found the colours and brightness to be more than adequate.

The capacitive fingerprint sensor is insanely quick, and even the slightest tap is enough to unlock the phone without needing to actually press the button. Face recognition continues to be quick too, and works equally well even in the dark.

Benchmark performance was good. In AnTuTu, we got 2,82,159 points, while 3DMark Slingshot returned 3,532 points. These are solid numbers; very similar to what we got from Snapdragon 730G-based smartphones such as the Poco X2 (Review), as well as the MediaTek Helio G90T in the Realme 6. Actual gaming performance is pretty solid too. PUBG Mobile ran smoothly at relatively high graphics settings. Battery drain was under 10 percent after a 30-minute match, which is good, and there wasn't much heating either. Other than getting slightly warm, the 6 Pro was comfortable to hold for extended gaming sessions.

Just like the Realme 6, the 6 Pro delivers a solid day and half of battery life, even with heavy usage. We recorded a runtime of 21 hours and 42 minutes in our HD video battery loop test, which is very good. The bundled 30W fast charger managed to charge the battery from zero to about 90 percent in an hour, which again, is very quick.

We were quite happy with the landscapes and close-up shots we got with the Realme 6 Pro during the day. Distant objects had fairly good details, colours were well represented, and HDR worked very well. Shooting at the full 64-megapixel resolution didn't always yield better results, and we noticed that the exposure wasn't always up to the mark in bright regions at this resolution. However, it does give you the flexibility of zooming in a lot more to crop something out. The wide-angle camera is fun to use but details aren't as good, which is evident upon zooming in. We also noticed very visible chromatic aberration around the edges of some objects.

Photos captured by the telephoto camera were decent too. Autofocus was quick but it took a full second to switch between any of the cameras, which wasn't ideal. The Realme 6 Pro boasts of up to 20X hybrid zoom , but we noticed that after about 5X, objects began to lose their sharpness rather quickly.

The ‘Ultra Macro' shooting mode is hidden away in the ‘More' menu and this can't be rearranged to suit your shooting style. Portrait mode works well, even for objects, and the level of depth can be adjusted before you take a shot.

In low light, the primary camera is pretty capable and manages a fair bit of detail with good colours. The wide-angle camera shoots duller photos due to the narrower aperture of f/2.3. It's the same story with the telephoto camera with its even narrower f/2.5 aperture. Thankfully, you can use Night mode with all three sensors, which offers brighter pictures with slightly better details. The Night mode also lets you toggle a tripod mode that keeps the shutter open for up to 30 seconds. We found close-ups taken in low light a bit of a hit or miss, as the 6 Pro can mess up colours quite badly.

We were quite impressed with the quality and detail in photos taken with the front cameras. The wide-angle camera is great for taking a group selfie and you can even shoot videos with it, but Night mode only works on the main selfie camera. The 6 Pro also supports slow-motion selfies with the primary selfie camera.

The Realme 6 Pro can shoot videos at up to 4K, but only at 30fps. At this resolution, you can't switch to the wide-angle camera, there's no stabilisation and any zooming you do will only be digital. At 1080p, you can choose 30 or 60fps and shoot with any of the rear cameras. However, you need to make the choice before you hit record, as you can't switch while recording, which is a bit limiting. The 6 Pro boasts of a new Ultra Steady Max mode, in addition to the Ultra Steady mode. It's limited to 1080p and uses the wide-angle camera to record. Image quality is a little inferior to simply using the Ultra Steady mode, but the footage is better stabilised.

Video quality is generally good at 4K but if you're moving about, then it's best to stick to 1080p, since footage is stabilised. In low light, there's some noticeable distortion when you walk about, due to the electronic stabilisation, which can be annoying.

Realme is making it quite hard for fans to choose the right phone, with so many launches within a short span of time. While the Realme 6 is a no-brainer, the Realme 6 Pro isn't so clear-cut, especially its top-end variant, as the Realme X2 is priced just a little bit higher. The 6 Pro and the X2 have very similar features, camera capabilities and performance, and the only really differentiating factors are their design and displays.

If you would prefer an AMOLED panel and an in-display fingerprint sensor, the Realme X2 would be the one to pick. On the other hand, the Realme 6 Pro looks more modern and has a wide-angle selfie camera.

As for how the Realme 6 Pro stacks up against the newly launched Redmi Note 9 Pro, check out our early impressions and stay tuned to Gadgets 360 for our full review and detailed comparison with Xiaomi's latest budget offering, coming up soon.