Realme 3i slots in between the Realme C2 and Realme 3, giving budget-conscious buyers yet another option. 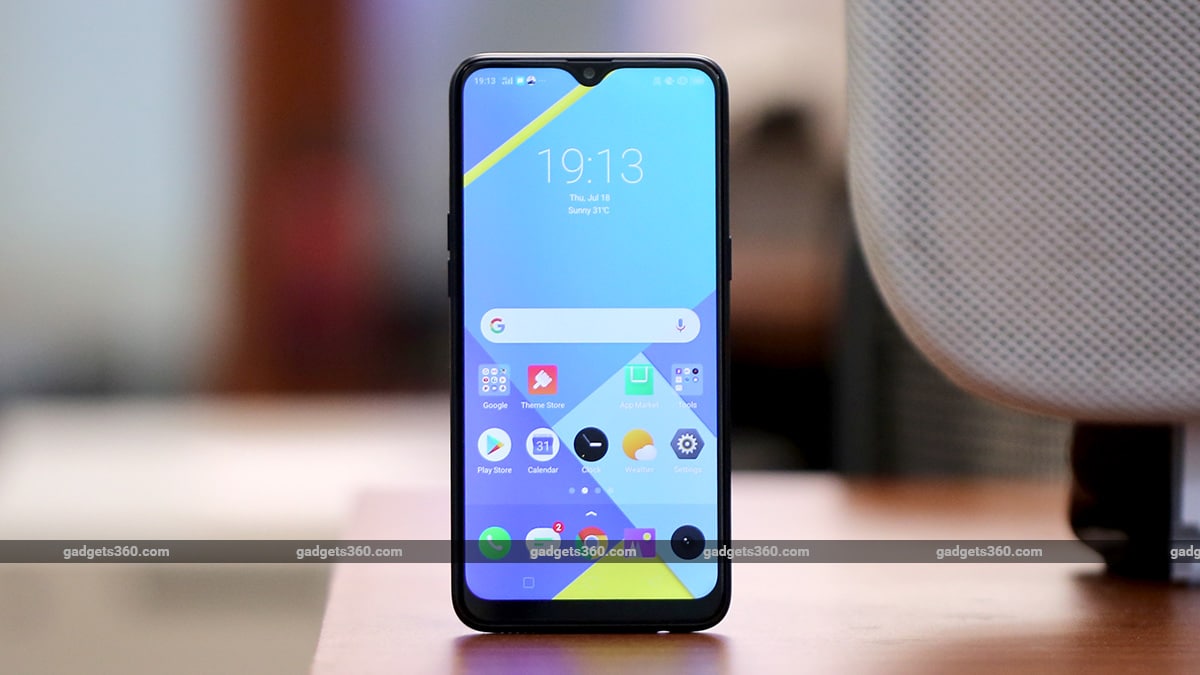 Realme 3i is a good budget smartphone in the under Rs. 10,000 price segment

Although it has very similar specifications as the Realme 3, the Realme 3i has two major differences — its aesthetics and its SoC. Is there room for the Realme 3i to exist alongside its siblings, or is it just another name in the crowd? We review to find out.

The physical aspects of the Realme 3i are identical to the Realme 3, right down to the last millimetre and gram. It's comfortable to hold as it's not too heavy at only 175g, and it's easy to grip and use with one hand. The main aesthetic difference is the use of a matte finish with a diamond pattern on the rear, similar to the C2. We have the Realme 3i in the Diamond Black finish (which looks more royal blue than black) but it's also available in Diamond Blue and Diamond Red, which is a blue-red gradient finish.

In the front, there's a 6.2-inch HD+ (720x 1520) panel with Corning Gorilla Glass 3. The bezels are fairly slim but the chin is quite noticeable at the bottom. The phone also has a dewdrop notch, which makes it look relatively modern. The display has good brightness, colours are punchy, and viewing angles are quite good too. The low resolution isn't a big issue but you will notice a slight lack of sharpness when comparing this display to one with a higher resolution.

The back of the Realme 3i has a diamond pattern, similar to the Realme C2

The power and volume buttons on the Realme 3i have a decent response and are ergonomically placed. There's a triple-slot tray on the left, which can accommodate two 4G Nano SIMs and a microSD card, all at once. Dual VoLTE is also supported. At the bottom we have a speaker, Micro-USB port, and 3.5mm headphone jack.

The diamond pattern finish offers good grip, and smudges aren't easily noticeable, unlike on the Realme 3, which has a glossy texture. The fingerprint sensor is easy to reach and works well. There's face recognition too, which just like previous Realme phones, works really quickly.

In the box, the Realme 3i ships with a silicone case, a 10W power adapter, a Micro-USB cable, a SIM eject tool, and warranty and quick-start guides.

Realme 3i specifications and software

The Realme 3i has a MediaTek Helio P60 processor in place of the Helio P70 that powers the Realme 3. This isn't a huge downgrade, as the P60 is still a very capable octa-core chip, with good CPU and GPU performance for its class. At launch, Realme has announced two variants of this phone. The Realme 3i variant with 3GB of RAM and 32GB of storage costs Rs. 7,999, while the other with 4GB of RAM and 64GB of storage is priced at Rs. 9,999. We have the latter version for review.

Other specifications of the Realme 3i include single-band Wi-Fi 802.11b/g/n, Bluetooth 4.2, GPS, USB-OTG, FM radio, and the usual variety of sensors that we've come to expect.

The Realme 3i has a dewdrop notch on the top

The software is fairly up-to-date, just like on the Realme X. The Realme 3i runs on ColorOS 6, based on Android 9 Pie. It even had the June 2019 security patch. The features of ColorOS are unchanged from what we just saw in our Realme X review.

The app drawer is now enabled by default, but you can switch back to a single-layered look if you prefer that. There are a whole bunch of preloaded apps, but at least all the third-party ones can be uninstalled. You also get the usual shortcuts such as Smart Sidebar, which can hold shortcuts to apps and can be accessed by swiping in from the edge of the display.

Google's Digital Wellbeing is still not present and we're yet to see Realme let us access Android 9's battery graph, which makes it easier to understand your battery usage at a glance.

Realme 3i performance and battery life

The 4GB RAM version of the Realme 3i that we used for several days fared well with regular, day-to-day use. Apps loaded fairly quickly, getting around Android's menus was painless, and the phone didn't heat up at all when we weren't stressing the CPU or GPU. In games, it did get a little warm, but not to the extent that would make you sit up and take notice.

Benchmark numbers aren't too bad for what you pay. AnTuTu returned a score of 1,32,996, while the T-Rex test in GFXbench returned 45fps. The scores are slightly lower than those of the Realme 3, but that's to be expected.

When it comes to gaming, the Realme 3i is no slouch. You'll have to play with reduced graphics quality settings for higher-end titles such as PUBG Mobile, which means there's some visible aliasing around edges of objects, but at least gameplay doesn't suffer much. We were able to comfortably win a 40-minute PUBG Mobile round on this phone, without any severe battery drain or heating issues. ColorOS has a feature called Game Space, which automatically locks the screen's brightness and prioritises system resources towards the game.

The one issue we had while gaming is that it's very easy to block the loudspeaker with your palm due to its positioning. The same holds true when watching videos. The speaker on the Realme 3i gets loud but the audio quality is quite average. You get to tweak the sound if you use a wired headset, through the Real Power Sound customisation options. You can enable this quickly with a toggle, set different sound modes, or manually tweak the bass, mid-range, and high levels.

Coming to the cameras, not much is different here compared to the Realme 3. The Realme 3i features a main 13-megapixel sensor with a f/1.8 aperture and phase detection autofocus (PDAF). There's a second 2-megapixel sensor for depth calculations when shooting in Portrait mode.

Landscape shot with Chroma Boost enabled on the Realme 3i. Tap to see full-sized image

Shot using Portrait mode on the Realme 3i. Tap to see full-sized image

The camera is quick at focusing, thanks to PDAF, but only when there's adequate light on your subject. Landscape shots pack in a decent level of detail, but complex textures such as small leaves or trees in the distance were not very distinct. We also noticed lots of chromatic aberration when shooting objects against the light.

Close-ups generally fared a bit better but some of our macros looked quite flat despite shooting in a relatively controlled environment. The 2-megapixel secondary sensor does a decent job of calculating depth, but there were times, especially when taking portraits of people, when this phone got the edges wrong.

Shot using Chroma Boost on the Realme 3i. Tap to see full-sized image

Shot using Nightscape mode on the Realme 3i. Tap to see full-sized image

Creative modes such as Chroma Boost and Nightscape are present too. The former should be avoided when shooting plants or foliage as green tones get highly exaggerated. However, landscapes such as a city skyline can benefit from a boost in colour, as you can see in the first sample.

Nightscape works, but not as well as we saw on the Realme X, mostly due to the limitations of the sensor. Night scenes look brighter than those taken in the standard Auto camera mode, but there's lots of grain and chroma noise. When shooting without Nightscape enabled, the camera struggles to focus on close-up objects and landscapes lack good detail.

Shot using Portrait mode on the Realme 3i. Tap to see full-sized image

The 13-megapixel selfie camera is actually not too bad. If you're patient and the light is good, you could manage to get some pretty usable shots. There's Portrait mode here too, but the blur effect is too aggressive and looks artificial. There's also no way to adjust it.

The Realme 3i can shoot upto 1080p video but there's no stabilisation. In fact, video isn't stabilised even at 720p, which is a little disappointing. Image quality is average but focusing speed isn't too bad, at least under good light.

This phone has a 4,230mAh battery, which lasted for 16 hours and 59 minutes in our HD video loop test, which is very good. With actual usage, we managed to easily get a day and half of runtime, even with a bit of gaming and camera use thrown in.

There's no fast charging, unfortunately, but the phone can get up to a 48 percent charge in an hour using the bundled charger. Charging it all the way to a 100 percent takes nearly two hours more.

The sole purpose of the Realme 3i existing is to plug the gap between the Realme C2 (Review) and the Realme 3 (Review). The base variant at Rs. 7,999 is a decent pick, as it's Rs. 1,000 less expensive than the Redmi 7, with the same amounts of RAM and storage. There's also no reason to buy the top-end variant of the Realme C2 anymore, as it's the exact same price as the 3i.

The 4GB version of the Realme 3i is a little tough to recommend, as even though it's still priced lower than the Realme 3 — at nearly Rs. 10,000, it competes with a higher tier of phones such as the Redmi Note 7S (Review), Asus ZenFone Max Pro M2 (Review), and even the Realme U1 (Review). All of these alternatives offer slightly better features such as higher resolution displays, better cameras, and more powerful processors.

If you're on a strict budget and can live with the average rear cameras, then the 3GB version of the Realme 3i is still worth considering.

Is Realme 3i the new best phone under Rs. 8,000? We discussed this on Orbital, our weekly technology podcast, which you can subscribe to via Apple Podcasts or RSS, download the episode, or just hit the play button below.