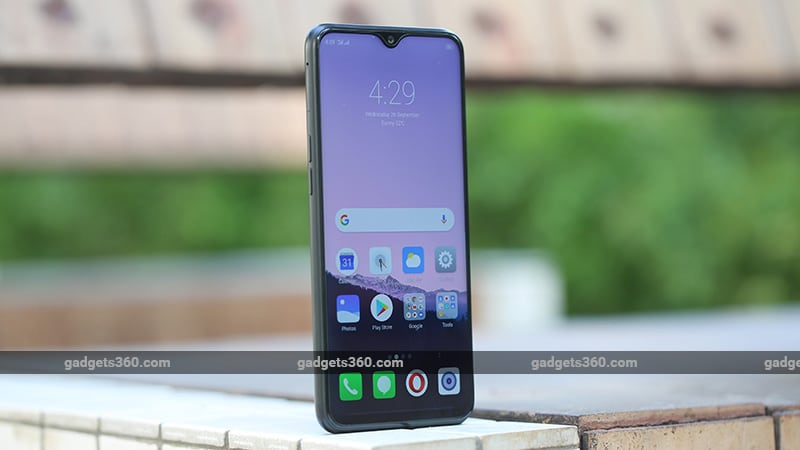 Chinese smartphone makers seem to be following a new trend of creating sub-brands that cater to demanding younger buyers. In the past, we’ve seen Honor from Huawei and Zuk by Lenovo, and most recently, we’ve had Poco by Xiaomi. Now, Realme has been spun off from Oppo. All of them seem to have a singular focus — offering very competitive specifications.

Realme, now a separate company, has similar plans with its latest launch, the Realme 2 Pro, which it teased during the launch of the Realme 2 (Review). The Pro moniker in the name suggests that the phone has powerful hardware, and once again, the target audience seems to be students and millennials. The Realme 2 Pro ticks all the right boxes on paper, but it’s now time to see how it actually performs, and whether it can keep up with the competition.

Holding it in one hand, the Realme 2 Pro feels pretty big. We struggled a bit with one-handed use but the phone itself isn’t too heavy. It’s a bit on the thicker side at 8.5mm, but the rounded polycarbonate edges offer a comfortable grip. The back of the phone has multiple layers of lamination which give it the feel of a glass panel, or as Realme calls it, a “crystal-like dewdrop effect”. The body attracts plenty of smudges and fingerprints, but it’s said to offer some resistance against heat and scratches. The latter claim might not be very true, as our review unit picked up scuffs after just a couple of days of ordinary use.

The 6.3-inch full-HD+ display is protected by Gorilla Glass 3 and has rounded edges and fairly slim bezels all around. However, the glass doesn’t wrap around the sides as seamlessly as we would have liked, which makes the edges a bit rough to the touch. This is made worse by the edges of the pre-applied screen protector. The ‘dewdrop’ notch design seems to be gaining popularity as it takes up the smallest footprint, and aesthetically, it looks really good. Due to the small size though, there’s just enough room for the front camera and there’s no notification LED. The earpiece is placed just above the front camera, while the sensors are placed to the right.

The power and volume buttons are on opposite sides of the phone, and line up well with your fingers. The SIM tray can accommodate two Nano SIMs and there’s a dedicated slot for a microSD card too (up to 256GB). The phone is said to support dual 4G with VoLTE, but this is something we couldn’t test as our pre-release review unit had been sourced from Vietnam. Dual 4G worked when we used two Airtel SIMs, but there wasn’t any toggle for VoLTE. Realme tells us that retail units in India will indeed have full support for dual 4G with VoLTE.

At the bottom, we have a single speaker grille, a Micro-USB port, and a 3.5mm headphone socket. It’s easy to block the speaker when holding the phone in landscape mode. The fingerprint sensor is placed at the back, and is very quick at authentication. We didn’t face any mis-reads either. The dual-camera module protrudes a bit from the back, but we didn’t notice any scratches on the glass during our usage. In the box, you get a 10W charger, a Micro-USB cable, a SIM eject tool, a silicone case, and some instruction leaflets.

The specifications of the Realme 2 Pro are pretty solid. All variants get the Qualcomm Snapdragon 660 SoC, which is a powerful octa-core chip. Up until now, the only phones priced below Rs. 20,000 that it has been seen in have been the Xiaomi Mi A2 (Review) and the recently introduced Vivo V9 Pro. Benchmark numbers attest to its capabilities, and AnTuTu returned a good score of 1,31,968 points while in the GFXbench T-rex gaming test, we got a score of 39fps.

The phone is available in three RAM and storage configurations to suit your budget. You have a choice between 4GB of RAM with 64GB of storage; 6GB of RAM with 64GB of storage; and the one we have, which has 8GB of RAM and 128GB of storage. The top-end variant of the Realme 2 Pro is the first phone in this price segment to have 8GB of LPDDR4X RAM. Other specifications include Bluetooth 5, dual-band Wi-Fi 802.11ac, USB-OTG, a gyroscope, an ambient light sensor, a proximity sensor, a compass, and an accelerometer. There’s no FM radio or NFC.

ColorOS 5.2 ships with some handy gestures and utilities like Smart Sidebar

The Realme 2 Pro runs on ColorOS 5.2, which is based on Android 8.1, and we were glad to see the recent September security patch. There’s a slight learning curve here, unless you’re coming from an Oppo phone. The latest version of ColorOS still has the annoying two-step process for dismissing a notification, but other than that, it’s quite polished. It also offers plenty of gestures and customisation options. Our unit had a lot of Vietnamese apps pre-installed, which obviously won't be present on Indian units, but we can’t tell whether some other bloatware will come in their place.

In addition to the fingerprint sensor, the phone also supports face recognition. It’s really quick at authentication, and works only when your eyes are open so it’s more secure than some of the other implementations. The screen lights up for assistance in dark environments. You can enable face recognition for securing apps and a private space within the phone’s storage, as well as unlocking the phone itself.

Smart Sidebar is a handy utility that gives you a slide-out panel from the edge of the screen for quick access to apps like the File Manager and Camera, and actions such as taking a screenshot. You can add shortcuts to your frequently used apps. The traditional navigation keys can be swapped out for gesture input, which works well. Some gestures are quite useful, such as the three-finger swipe up for entering split-screen mode, and a swipe down for taking a screenshot.

We used the Realme 2 Pro for several days and quite honestly, we found little to complain about. Other than a few quirks of ColorOS, apps and the UI in general run smoothly. We didn’t notice any slowdowns when multitasking, and load times even for heavy games were pretty good. The display is very legible even under direct sunlight, as colours retain good saturation. The phone doesn’t heat up too much either. The upper back of the phone got a bit warm, but this was only after prolonged gaming or camera usage. Call quality was good, and there’s call recording built into the dialler app.

The Game Space app gives you the option to block notifications and free up memory automatically when you fire up a game. There’s a toggle switch for ‘Graphics acceleration,' which according to Realme, is currently best optimised for PUBG and Arena of Valor. We didn’t notice any real difference in image quality or gameplay smoothness in PUBG, as the game ran just fine even at ‘HD’ image quality and the framerate set to ‘High’. The same goes for Asphalt 9: Legends.

The single speaker sounds tinny and isn’t very loud. You get Dirac sound enhancement for headphones but there’s nothing to amplify the volume of the speaker. All the games we tried filled up the entire screen, which means that the notch blocks some content. This this can be fixed by changing the scaling setting of each individual app in the Settings app, which prevents them from extending into the notch area.

The Realme 2 Pro packs in a 16-megapixel main rear camera with a f/1.7 aperture, which captures good detail in daylight. In landscape shots, we noticed good dynamic range and colours, with plenty of details even in smaller objects, such as leaves on trees at a distance. The wide aperture produces a pleasing bokeh effect in close-up shots, which once again is handled well. We struggled to get a clear shot when shooting fast-moving objects such as pets due to slight shutter lag, but other than this, autofocus was quick. There’s a button for 2x zoom, which essentially does a digital zoom so it's not particularly helpful.

The second 2-megapixel sensor is only used for depth calculation. Images shot in the ‘Portrait’ mode look good, with good edge detection and sharpness on our subjects, even under artificial lighting at night. You can choose from a bunch of lighting effects as well. Photos shot in low light were a bit grainy, and details took a bit of a hit, especially in landscape shots. Close-ups lacked sharpness, but overall, we still ended up with usable shots.

Video recorded at 1080p looked good. There’s electronic stabilisation, which works well, albeit with a slight shimmer effect in the video. 4K recording is supported and quality was good in daylight, but there’s no stabilisation. Video shot in low light was a bit grainy too. Other than the standard shooting mode and time-lapse, there aren’t any other options for video, such as slow-motion. The beautify mode works well if you set it manually, as the AI tends to be a bit aggressive with effects.

Realme has used a 16-megapixel front sensor, and you can also make use of bokeh effects, HDR, and a screen flash. Image quality is decent but details could have been better. The screen flash is quite effective at illuminating your face but it messes up skin tones a bit. There’s a ‘Stickers’ shooting mode that lets you add different AR stickers to selfies or to other people’s faces.

The 3500mAh battery easily lasted us through an entire day on a single charge, with ordinary usage that included a bit of gaming, streaming music, the usual social apps. We had two SIM cards in the phone. In our HD video loop test, we got a runtime of 10 hours and 22 minutes, which is slightly better than average. The Realme 2 Pro doesn’t support fast charging, but with the bundled adapter, we were able to get to roughly 64 percent in an hour, and it took about 2 hours and 20 minutes to charge completely from zero.

Verdict
The Realme 2 Pro delivers well on its promise of being a powerful phone. We think that many people will see its appeal too, especially at the price of Rs. 17,990 for the version with 8GB of RAM and 128GB of storage. This makes it very good value for money compared to the Mi A2 (Review) or even the recently launched Vivo V9 Pro, both of which sport the same Snapdragon 660 SoC. The less expensive variants which start at Rs. 13,990, are very competitive with phones such as the Xiaomi Redmi Note 5 Pro (Review), Nokia 6.1 Plus (Review), Motorola One Power, the 6GB version of the Asus ZenFone Max Pro M1 (Review) and even the 6GB version of the Realme 1 (Review).

The Realme 2 Pro has a lot going for it, mainly its sharp and vivid display, fast face unlock, neatly designed notch, good build quality, and solid app and gaming performance. Low-light still and video performance could have been better and we wish that Realme (and Oppo) would get rid of the annoying way that notifications are handled.

Other than this, the Realme 2 Pro is a solid option under Rs. 20,000 if you’re looking for a good all-rounder.