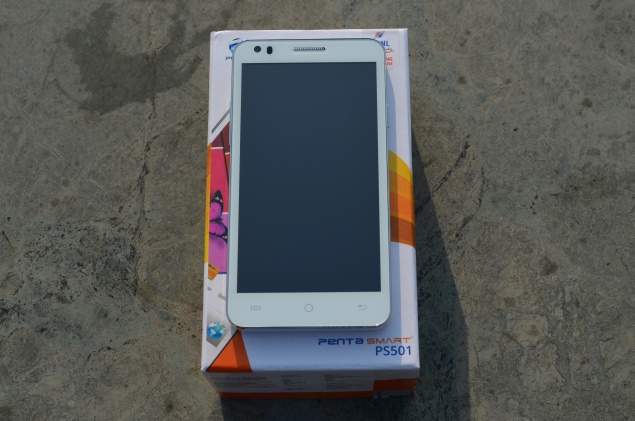 Smartphones are getting more wallet-friendly with each passing day, thanks mainly to endeavours from global as well as domestic players. The latest addition to this collection of feature rich and yet affordable phones, is the Penta Smart PS501.

Pantel Technologies, the owner of the Penta brand which is associated with tablets, has now plunged into the smartphone segment with its new Penta Smart PS501 phablet, based on Android Jelly Bean. The phablet comes with BSNL's data bundling alliance. How well does it stand up in an increasingly competitive market? We find out. 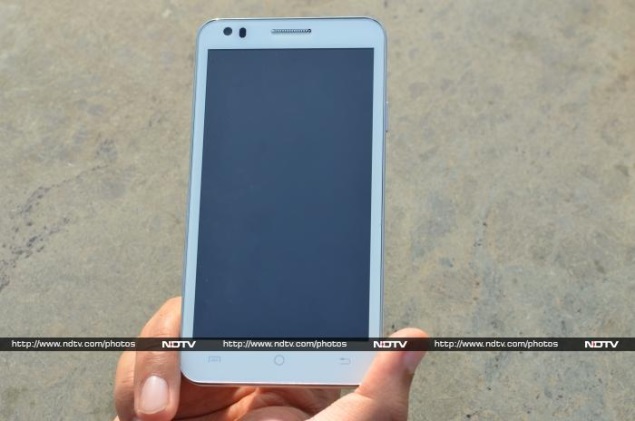 The Penta Smart PS501 is a stock plastic device with few flourishes to set it apart from the budget Android phone crowd. Available in White, there is a silver trim running along the sides of the front panel of the phablet, which is not plastic. Further, the plastic body does not feel too cheap as it doesn't creak and groan when we applied some pressure on it, unlike other phones at this price. However, we cannot promise its chances against frequent drops as it lacks the durability of a metal chassis. Notably, the Penta Smart PS501 is quite heavy, much heavier than other budget phones in the segment, but not uncomfortably so. 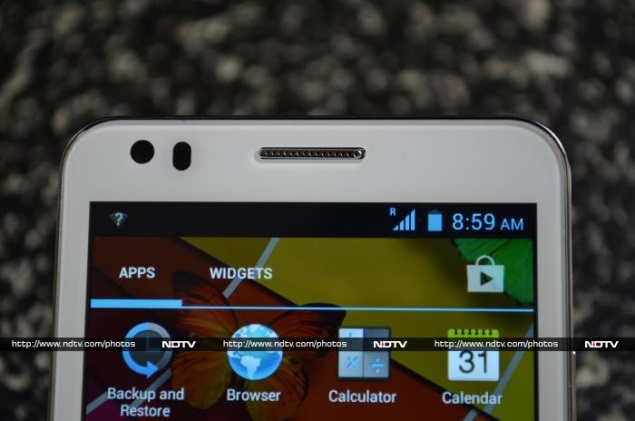 ThePenta Smart PS501's back panel is dominated by plastic, which at times tend to get slippery when using for longer periods. We wished that Pantel could have used a meshed plastic at the back that generally helps in gripping the phone better. The rear has a 5-megapixel camera with LED flash sitting at the top centre, while the speaker grill sits at the bottom. There is Penta logo branding beneath the flash, and also includes the BSNL logo at the bottom, both painted in grey. 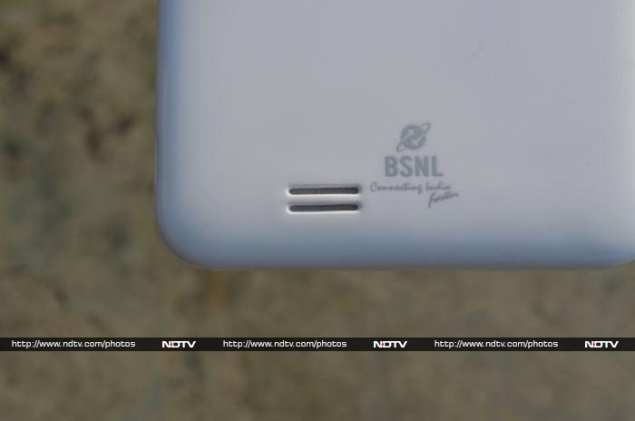 The Penta Smart PS501's volume rocker buttons are placed on the left panel, while the right side houses the power button. Pleasingly, both the physical buttons (volume, power) are made of some kind of metal material, which makes it easy to hit them without any niggles. Further, the buttons on Penta Smart PS501 are sensibly arranged, as well as the speaker and camera to avoid being obscured by fingers while using the device. The top panel includes a Micro-USB charging port, and a 3.5mm audio jack. With dimensions of 138.4x72.2x9.6mm, the Penta Smart PS501 is notably not the slimmest smartphone around. 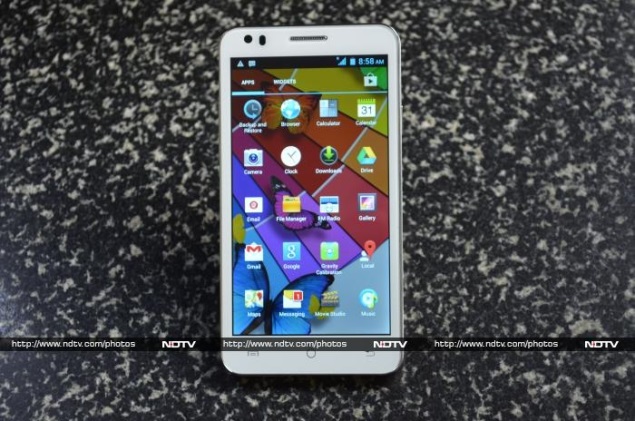 The Penta Smart PS501 comes with a 5-inch IPS display with a 480x854 pixels resolution. While that doesn't sound impressive when compared to some high-end Android smartphones, the real life experience is decent and is acceptable for the price.

The 480x854 pixels resolution screen makes the texts look slightly fuzzy and high-resolution images do not look too great either. But that's a problem most other budget smartphone suffer from.

The brightness of the Penta Smart PS501's display is above average, but sunlight legibility is slightly hampered by the rather reflective screen. 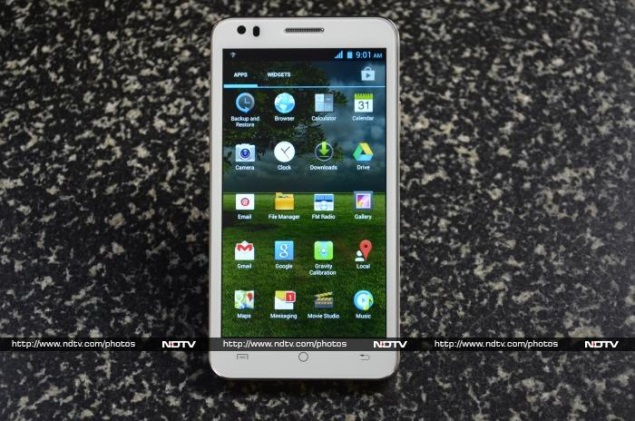 Colour reproduction and viewing angles on the IPS display are not that bad. We observed that the display of the smartphone picked up smudges easily and is also a fingerprint magnet; we had a tough time getting rid of them. 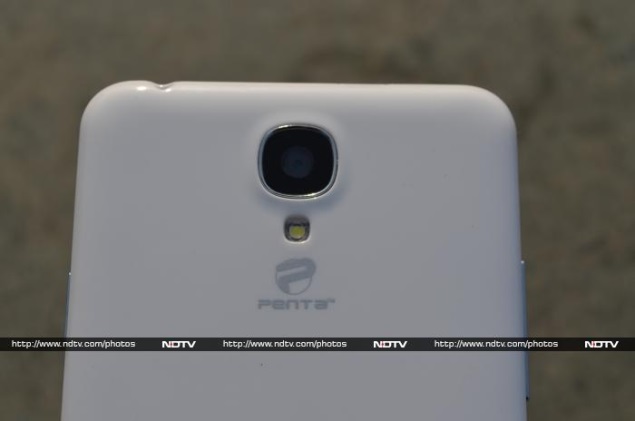 The Penta Smart PS501 sports a 5-megapixel autofocus camera and comes with an integrated LED flash, a feature missing from many budget smartphones. Thanks to the Android 4.2.2 version onboard, users can directly launch the camera app by swiping the screen on right. 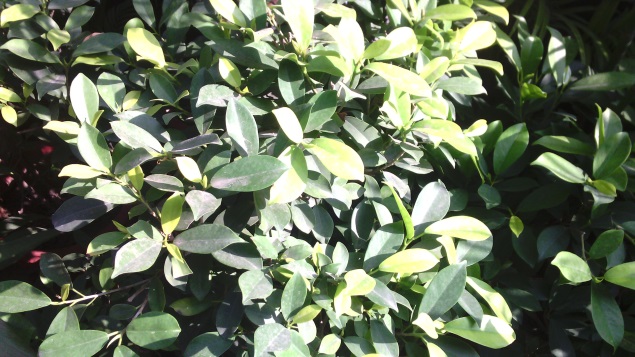 The camera app on the Penta Smart PS501 is stock and does not feature any additional options. The Penta Smart PS501's camera software lets you tweak a few settings for still pictures like scene mode (Auto, Night, Sunset), ISO, white balance, panorama mode and focus assist light. There's no face-detection. It also offers a burst mode, letting users click 40 to 99 shots at once; users just need to long-press the camera soft key on the display to take a burst shot.

The images clicked with the Penta Smart PS501 were not the sharpest, and colours at times seemed just a bit washed out. We found the details in the images and noise well under control when there was plenty of light. The focus is acceptable, albeit a little slow at times, and the shutter speed is perfectly manageable.

Using the Penta Smart PS501's camera in low-light did not return good results, with a lack of detail, apart from noise and graininess permeating the entire image. The camera on the Penta Smart PS501 overall is slightly-below average when compared to other budget phones, but quite usable in good light.

We feel that a dedicated camera button could have been a pleasing addition on the Penta Smart PS501's large body, though we may be nitpicking here slightly. 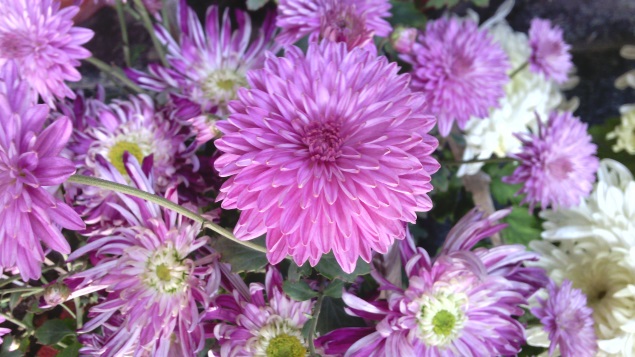 There is a 0.3-megapixel front camera on the Penta Smart PS501 as well. The front camera is good for some casual selfie shots, however the quality is nothing to write home about. 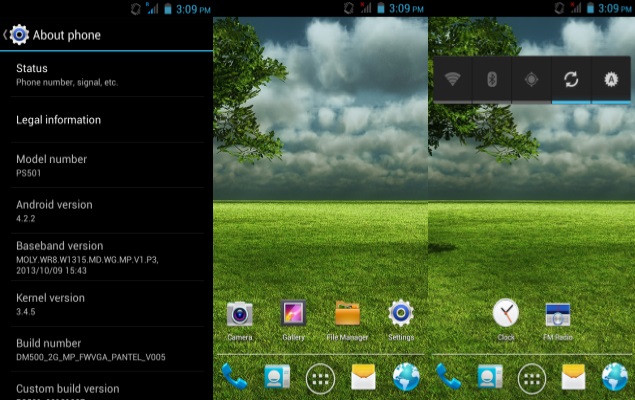 The Penta Smart PS501 runs Android 4.2.2 Jelly Bean out-of-the-box. The world might be slowly switching over to Android 4.3 Jelly Bean but Pantel has opted to go with the Android 4.2.2 for the smartphone - not bad, considering the price.

That said, the Penta Smart PS501 packs in a fair deal in terms of software. The basic Android interface has not been tampered with much, although the absence of hardware keys means that you will have to depend on three soft buttons below the display which light up whenever the display is in use to find your way around, with the Home button also doubling up as an app switcher on long press. Thanks to the Android 4.2 Jelly Bean, Penta Smart PS501 gets lock screen widgets that let users launch apps like Clock, Camera, Gmail, Google Now, Messaging and additional third-party apps straight from the lock screen.

Similar to most other Android devices, there are five customizable home screens on which you can drop widgets and app shortcuts. The notification tray of Penta Smart PS501 features a shortcut for settings and a clear all notifications shortcut, along with expandable notifications (expanded with the two finger pull gesture) for profile, brightness, settings, Wi-Fi, Bluetooth, airplane mode, auto-rotate, mobile data and profiles (for alerts and other notifications). There are shortcuts for dialler, contacts, menu, messages and native browser on the homescreen of the Penta Smart PS501. Similar to other Android 4.2 Jelly Bean based smartphones, the notifications tray on the device features settings shortcut and a clear all button. 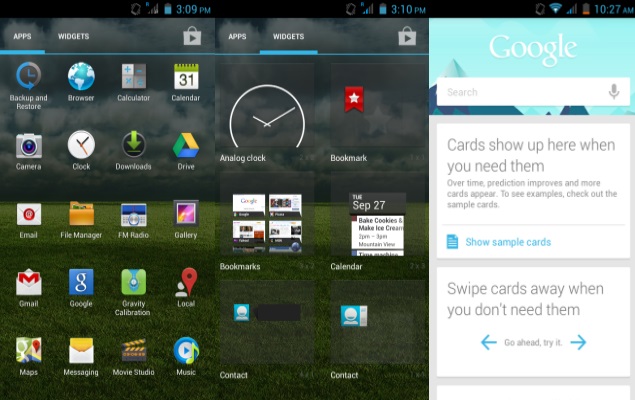 The Penta Smart PS501 comes with the usual Android goodies like Gmail, Google Maps and Google Talk in addition to some bundled apps like a file manager, a video player and a profile manager. The smartphone comes with few other pre-loaded apps such as Facebook, Twitter, News and Weather.

The native music player and the video player of the Penta Smart PS501 are again closer to the stock experience. There are no enhancements, settings or new tweaks in both (music and video) players.

Performance/ Battery Life
The Penta Smart PS501 is powered by a 1.2GHz dual-core Cortex A7 processor (unspecified chipset) and has 512MB of RAM onboard. There is 4GB of inbuilt storage, out of which less than 2GB is user-accessible. The phone supports up to 32GB expandable storage via microSD card. 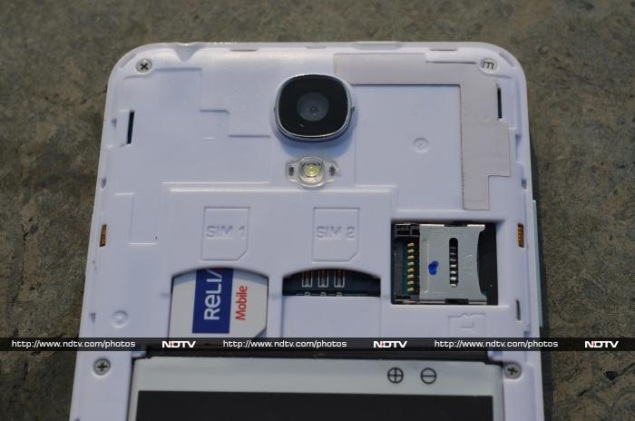 The Penta Smart PS501's processor struggles from the word go, even simple transitions between the homescreen feel slow. We cannot recommend this phone for gaming buffs, as the Penta Smart PS501 did lag often while we played Temple Run 2. The touch interface seemed a bit laggy and the smartphone even crashed and restarted a few times when we ran multiple apps.

On the sound front, the Penta Smart PS501's output is okay both on supplied headphones and on speakers.

A 5-inch display device can be considered good for viewing movies and videos, but the same cannot be said for the Penta Smart PS501, due its low resolution display. The device was also not able to play full-HD videos, or the .AVI format, but supported a few formats like .MOV, .MKV and .MP4.

Surprisingly, the native video player of the Penta Smart PS501 crashed occasionally when we tried to play any video on it. However, this was fixed by downloading a third party video player from the Play Store.

Call quality on the device was good. The Penta Smart PS501 is a dual-SIM phone (GSM+GSM) with support for 2G network. Notably, the smartphone does not support 3G networks. 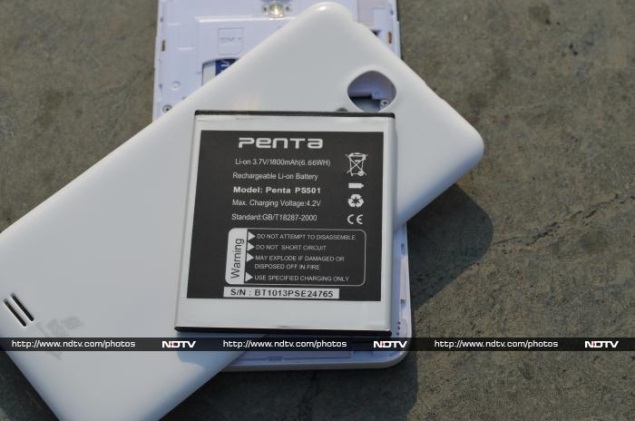 The Penta Smart PS501 ships with an 1800mAh battery that according to the company can deliver up to 100 hours of standby, while there is no word on the talktime. However, based on our user-experience the phablet delivers satisfying battery performance.

We were able to get more than a day with a single charge and with usage that includes Wi-Fi turned on for all time, Web browsing, a few calls lasting for about an hour, display set on full-brightness and with the usual notifications for messages, emails, Facebook, and WhatsApp. The Penta Smart PS501 lasted more than 14-15 hours with the battery status showing 30 percent.

It's also worth pointing out that we were on Wi-Fi throughout the day, and did not use 2G. Changing the settings might help in running the Penta Smart PS501 for a longer duration, depending on the usage pattern.

Verdict
We must confess that we felt a little let-down by the Penta Smart PS501, as we had some fair expectations from the device, which had created a lot of buzz in the Indian market for its pricing.

The Penta Smart PS501 works fine as long as one uses relatively light apps and do not start multi-tasking too much. Battery backup is a plus for the device, but we would have appreciated a display with a higher resolution.

Other departments like multimedia and software are above average, but nothing to boast about. Another plus with the Penta Smart PS501 is that BSNL is offering a pre-bundled pack for the smartphone of 1200 minutes free talktime on the BSNL network. Overall, we find it hard to recommend this phone.

Alternative to be considered include Micromax's new smartphone, the Micromax A77 Canvas Juice which packs huge 3000mAh battery but is priced a bit higher than the Penta Smart PS501. Those looking for a better brand can opt for the Samsung Galaxy Star Pro, which comes around the same price but runs the dated Android 4.1.

One can also consider the Nokia Lumia 520, which is available at a price of around Rs. 8,000, but is a much better option than most of the budget Android crowd.