Does the Oppo Reno 2Z offer as good value as the competition? 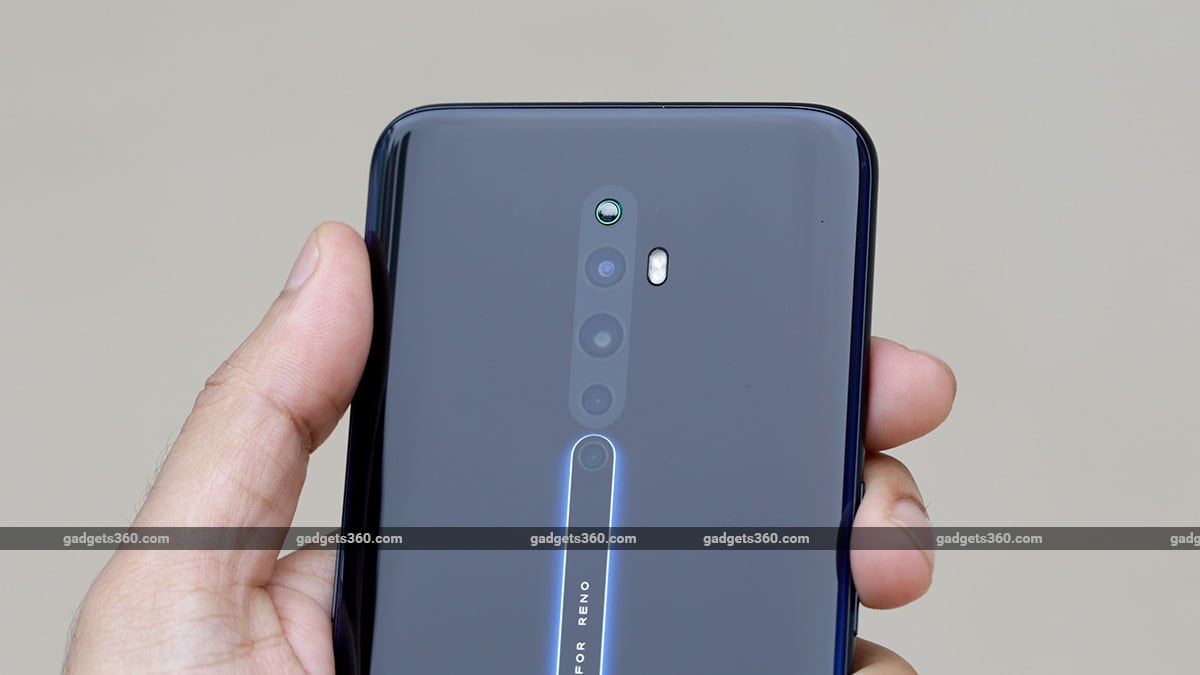 Four cameras because more should be better, right?

The Chinese smartphone maker has priced the Reno 2Z at Rs. 29,990 in India, and it is the more affordable model of the two already available in the country. The Oppo Reno 2Z packs in a quad-camera setup and is powered by the relatively new MediaTek Helio P90 SoC. Is it better than what the competition offers at this price? We put it to the test to find out.

All three Reno 2 smartphones seem to have similar designs at first glance, and it is hard to distinguish between them. The Oppo Reno 2Z has an all-display front with thin borders on the top and sides, though the bottom bezel is thicker. The AMOLED display on the Reno 2Z measures 6.5 inches diagonally and has good viewing angles. It also houses an optical in-display fingerprint scanner for unlocking the device with a fingerprint.

Oppo has located the selfie camera in a pop-up module which is different compared to the shark-fin module that some of the other Oppo Reno devices flaunt. This pop-up module is illuminated by lights on either side, and reminds us of what we've seen on the Redmi K20 Pro (Review) which has a similar selfie camera module. The Reno 2Z also offers the option to change the light colour, which is a neat touch.

Oppo has placed the power button on the right while the volume buttons are on the left. These are all positioned towards the centre of the frame which makes reaching them convenient. We also liked their clicky feedback.

Cool kids like pop-up modules, this one lets you change light colour

At the bottom, the Oppo Reno 2Z sports a USB Type-C port, primary microphone, loudspeaker, and 3.5mm audio jack whereas the pop-up selfie camera and the secondary microphone are on the top.

The Oppo Reno 2Z boasts of a quad-camera setup, which sits flush with the back of the device, unlike many other recent smartphones which have protruding camera modules. The fourth sensor is positioned lower than the rest and is easy to miss. All the camera sensors are placed beneath the glass panel on the back. To prevent the glass around the cameras from getting scratched, Oppo has positioned a nub above this cluster which helps raise the phone when placed on a flat surface.

Oppo ships a high-quality case along with a pair of earphones and a 20W VOOC Flash Charge 3.0 charger in the box.

The Oppo Reno 10X Zoom Edition (Review), which was launched fairly recently in India, was powered by the flagship-grade Qualcomm Snapdragon 855 SoC, while the Reno 2Z sports the MediaTek Helio P90 SoC. This new processor isn't very common yet, and the Reno 2Z is among only a few phones to sport it so far. The Helio P90 has six ARM Cortex-A55 cores clocked at 2GHz and two Cortex-A75 cores clocked at 2.2GHz. It'll be interesting to see how it stacks up against some of the other processors available in phones at this price point. The Oppo Reno 2Z has been launched in only one configuration, with 8GB of RAM and 256GB of storage. You can expand storage using the dedicated microSD card slot.

Oppo offers dual 4G VoLTE functionality with the Reno 2Z and there is also support for Bluetooth 5, dual-band Wi-Fi, four satellite navigation systems, and USB-OTG. The Reno 2Z also gets the standard sensors.

No notch on this big 6.5-inch AMOLED display

The front of the Oppo Reno 2Z is dominated by a 6.5-inch full-HD+ (1080x2340 pixels) AMOLED display which gives this phone a screen-to-body ratio of 91.1 percent. The display is vivid and you can tweak its colour temperature. We found that viewing angles are good, and it does get bright enough to be visible outdoors.

Oppo ships the Reno 2Z with Colour OS 6.1 running on top of Android 9 Pie, and our unit was running the August security patch. The UI is similar to what we have seen on recent Oppo and Realme smartphones and we had no trouble navigating around it. Oppo also offers gesture navigation if you don't like the traditional three-button layout. Android 9's Digital Wellbeing feature is available, and the phone also has parental controls that let you monitor and restrict usage.

We found a fair amount of bloatware preinstalled on the device, including the UC Browser, NewsPoint, Dailyhunt, Helo, Paytm, Amazon, and Facebook apps. We found that the usage experience was good as long as we didn't open these apps because once we did, some of them started pushing spammy notifications to us throughout the day. Oppo has its own Play Store alternative called App Market which lets you download apps, and similarly there's Game Center for games.

Color OS 6.1 also has a feature called Game Space which blocks notifications, disables auto-brightness, and clears the RAM when you launch a game. Other features such as Smart Driving and App Cloner are also present on the Reno 2Z.

Since the Oppo Reno 2Z is among a few phones with a MediaTek Helio P90 SoC, we were curious to see how it performs compared to Qualcomm's popular Snapdragon processors. We did not experience any lag or stutter while using the smartphone. Multitasking was a breeze, and the 8GB of RAM meant that the Reno 2Z could keep apps running in the background.

The in-display fingerprint scanner on the Reno 2Z is super quick and we had no issues using it. We also set up face recognition on the Reno 2Z. The phone is quick to raise its pop-up module and scan for a registered face. It unlocks quickly in different lighting conditions, and can bump up the screen brightness if needed in low-light conditions for a proper scan.

We played PUBG Mobile on the Reno 2Z and the device defaulted to the High preset with graphics set to HD and the frame rate set to High. We could not bump the quality up further, but the device ran the game at these settings without any issues. We played the game for 29 minutes, after which the device registered an 8 percent battery drop. It was also barely warm to the touch after gaming.

The in-display fingerprint scanner is quick to scan your digits

The Oppo Reno 2Z packs in a 4,000mAh battery and manages to go beyond a day and a half with regular usage. We used the smartphone for playing PUBG Mobile, taking camera samples, and periodic Web browsing. In our HD video loop test, the Reno 2Z managed to go on for 16 hours and 20 minutes. The bundled 20W charger charged the phone up to 48 percent in 30 minutes and 88 percent in an hour. A full charge on the device took around 1 hour and 15 minutes.

Oppo has gone with a quad-camera setup on the Reno 2Z, consisting of a 48-megapixel primary sensor with an f/1.7 aperture; an 8-megapixel wide-angle camera with an f/2.2 aperture and a 119-degree field of view; a 2-megapixel monochrome sensor; and a 2-megapixel depth sensor. The primary sensor is the high-end Sony IMX586, which has recently been used for affordable devices such as the Realme 5 Pro. There is no optical telephoto camera like we saw on the Oppo Reno 10x Zoom Edition, and this new device relies on digital zoom. At the front, the pop-up module packs in a 16-megapixel camera.

The camera software is similar to what we have seen on the Oppo Reno series and offers multiple modes to choose from. There are Night, Pano, Time-Lapse, and Expert modes apart from the regular photo and video modes. There are quick toggles for HDR, filters, and Dazzle Color. Weirdly, Oppo has implemented a toggle button to switch to the wide-angle camera, which isn't as intuitive as the controls we've seen on most other phones. One other oddity was that to take full resolution 48-megapixel shots, we had to go into the camera settings and change the photo aspect ratio to 4:3 (48MP). This is easy to miss, and we feel that the camera app could do with some tweaks to make it more user-friendly.

We found the Reno 2Z to be quick to lock focus. This phone does use AI to set the camera up. In daylight shots, the Reno 2Z manages good details, and colours are also quite accurate. The smartphone enables HDR automatically for bright scenes and manages to do a good job. The sample pictures here look a little dull since they were shot in overcast conditions. For close-ups, we observed that the Oppo Reno 2Z can separate the subject from the background well and create a good bokeh effect without requiring multiple attempts. Photos taken with the wide-angle camera had less detail than those taken with the primary sensor, but the software corrects barrel distortion.

Photos taken in low light did not have a lot of noise. The AI detects dim scenes and lowers the shutter speed. These photos appeared good as is, but we noticed a lack of detail on zooming in. The Reno 2Z also has a dedicated night mode which lowers the shutter speed further. This resulted in brighter images with better details in the shadows.

Portraits taken with the Reno 2Z had good edge detection and the lets you set the level of blur before taking a shot. We liked the output quality. The phone also managed to correctly blur the gap between our subject's arm and body.

Selfies also had good details and the app does have beautification enabled by default. You can change beautification parameters before taking a shot, or switch it off entirely. Selfies taken in low light had less detail, but the screen flash can come in handy when shooting in dimly-lit environments

Video recording maxes out at 4K 30fps for the primary sensor and 1080p for the wide-angle camera. Footage shot at 1080p was stabilised but had a jittery effect visible in the output. There is an Ultra Steady mode which, when enabled, crops the frame and does a better job of stabilising the output. Video taken in low light also had a visible shimmer effect, and details were poorer.

The Reno 2Z is among the three smartphones Oppo has just launched in the new Reno 2 series. This device is well designed and packs a quad-camera setup. It is powered by a MediaTek Helio P90 SoC and we like the fact that it has 8GB of RAM and 256GB of storage. Color OS also offers a good experience and has features that we found to be useful, even though it can be improved with some bloatware control.

Oppo has been marketing the Reno series primarily on the basis of camera quality, and the Reno 2Z does offer good photo capabilities. However, the camera app still needs some tweaks to make it more user-friendly. The MediaTek Helio P90 SoC did not deliver the kind of performance we were expecting for the price. Other smartphones competing at around this price, such as the Redmi K20 Pro (Review), offer significantly better performance. If you are willing to spend a little more money, the OnePlus 7 (Review) or the Asus 6Z (Review) will offer better value for your money.