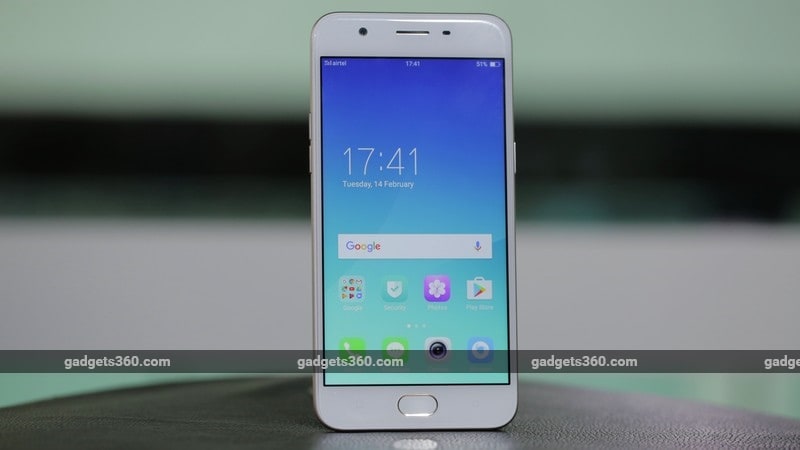 The Oppo A57 is a newly launched selfie-oriented smartphone targeted at value-conscious buyers. It sits in the sub-Rs.15,000 price segment and borrows many traits from its pricier sibling, the Oppo F1s (Review).

The latter has proven to be a very capable selfie-smartphone, and so it’s time to see if the Oppo A57 manages to deliver similar performance. The successor to the Oppo A37, this new model boasts of an upgraded processor, better RAM, and more internal storage along with a more recent version of Android. Let’s take a closer look at the Oppo A57 in our review.

Oppo A57 design and build quality
The Oppo A57 is moulded from pretty much the same cast as the F1s, and they share very similar design elements. Having said that, it does come across as less premium compared to the F1s, which is alright since we’re considering a lower price point. Build quality is still pretty solid thanks to the metal frame, although the Oppo A57 does feel a bit like plastic. The phone misses out on a few features such as backlit capacitive buttons. The home button on the Oppo A57 is also of the capacitive type and integrates a fingerprint sensor. The matte texture offers decent amounts of grip so you don’t really need a case.

The 5.2-inch IPS display on the Oppo A57 sports an HD resolution, which is tolerable as text isn’t too jagged and images appear fairly sharp when viewed from the usual distance. We really liked how bright this phone can get, and sunlight legibility is spot on. Colours are nicely saturated and good viewing angles are good. Oppo uses Gorilla Glass 4 but still throws in one pre-applied screen guard and an extra one in the box for good measure.

There’s a SIM tray on the right of the Oppo A57 that accepts two Nano-SIM cards and a microSD card of up to 256GB. The dedicated slot for storage expansion means you needn’t compromise on using two SIM cards, which we appreciate. There’s a standard Micro-USB port and a 3.5mm headphone socket on the bottom. There’s virtually no camera bump on the back of the Oppo A57 apart from the very mild protrusion of the ring around the camera lens.

The Oppo A57 is slim, light, and easy to live with. In the box, you get a Micro-USB cable, charger, earphones, case, screen guard, SIM ejector tool and some manuals.

Oppo A57 specifications and features
The Oppo A57 is powered by a mainstream octa-core Qualcomm SoC called the Snapdragon 435, which is more or less on par with the MediaTek MT6750 seen on the Oppo F1s in terms of performance. AnTuTu and Quadrant posted slightly better numbers - 45,243 and 21,971 points respectively - but 3DMark and GFXbench dipped by small margins. The CPU is accompanied by 3GB of RAM and 32GB of storage. Other specifications of the Oppo A57 include Bluetooth 4.1, Wi-Fi 802.11b/g/n (single band), FM radio, USB-OTG, and GPS. VoLTE and 4G are supported on all Indian bands.

The Oppo A57 runs on ColourOS 3.0 which is based on Android 6.0 Marshmallow. The interface works very well despite it being a significant customisation. The iOS influence is still present, but it’s a bit more subtle this time unlike on Vivo’s custom OS. The notification shade has two pages now as the toggle switches are separated from app alerts. There’s a custom app store from Oppo along with O-Cloud for backups and gestures for single-handed operation and to turn the screen off. Google’s suite of apps including Duo, and some third-party ones like Facebook, Instagram, and Amazon, are also bundled on the Oppo A57.

Oppo A57 performance
The Oppo A57 cruises through basic apps for social networking and email as well as some light games quite well. The phone only gets a bit warm around the camera area when doing something intensive. On average, we found ourselves with about 1.4GB of free RAM, which is good enough to keep things running smoothly.

The fingerprint sensor works really well and is very quick in authentication. You can also use it to lock apps and files. The phone handles video files up to 1080p and the stock music player can read high- bitrate FLAC files too. The speaker on the Oppo A57 isn’t the loudest for media when there’s a lot of ambient noise but suffices for alerts and ringtones.

The Oppo A57 gets a similar camera configuration as the Oppo F1s, with a 16-megapixel sensor up front and a 13-megapixel shooter at the back. The front sensor is competent under good lighting, producing sharp and detailed selfies. However, low-light pictures taken with the Oppo A57 are grainy. The screen flash is also pretty weak so unless you have the phone really close to your face, don’t expect miracles here. Beauty mode gets a background blur filter, but the end result is nowhere near as good as what can be achieved with a dedicated second camera for measuring depth. Other modes on the Oppo A57 include selfie panorama, video, and time-lapse.

The rear sensor on the Oppo A57 does a pretty decent job in daylight, with detailed landscapes and macros. Colours are captured well and focusing speeds are also good. Low-light performance is average, as details on objects tend to get murky and focusing speeds dip a bit. Video recording on the Oppo A57 maxes out at 1080p and quality is acceptable. Here, shooting modes include Ultra HD which stitches four stills together, Expert mode, filters, GIF, and double exposure.

The Oppo A57 features a non-removable 2900mAh battery which easily lasted us a full day on a single charge. Our HD video loop test gave us a runtime of 12 hours and 7 minutes, which is very good. There’s no fast charging, so the battery does a take a fair while to fully charge.

Verdict
At Rs.14,990, the Oppo A57 offers a package that very similar to the Oppo F1s, but at a more affordable price point, which straightaway makes it better value compared to its slightly older cousin. Low-light camera performance isn’t the best, and basic features such as backlit buttons and dual-band Wi-Fi are missing, but on the plus side you get similar CPU performance, good build quality, and a very good fingerprint sensor.

Android Marshmallow is another reason to consider the Oppo A57 over the Oppo F1s, as from what Oppo has stated, the Oppo F1s will most likely be stuck on Lollipop. The same could also be true when it comes to the potential future lack of a Nougat update for the Oppo A57, but at least for now its OS is newer. This neglect has long been our pet peeve with budget phones from most brands.

If selfies aren’t your thing, then the Moto G4 Plus (Review) is a better candidate for the job at this price point (until the Moto G5 arrives, which is pretty soon). However, if you’ve been waiting for the Oppo F1s to drop in price, then the Oppo A57 is the closest you’ll get to it in term of features and performance.

For Honor Is Out on PC, PS4, and Xbox One - Here's Everything You Need to Know
Apple Music 'Well Past' 20 Million Subscribers, Reveals Eddy Cue