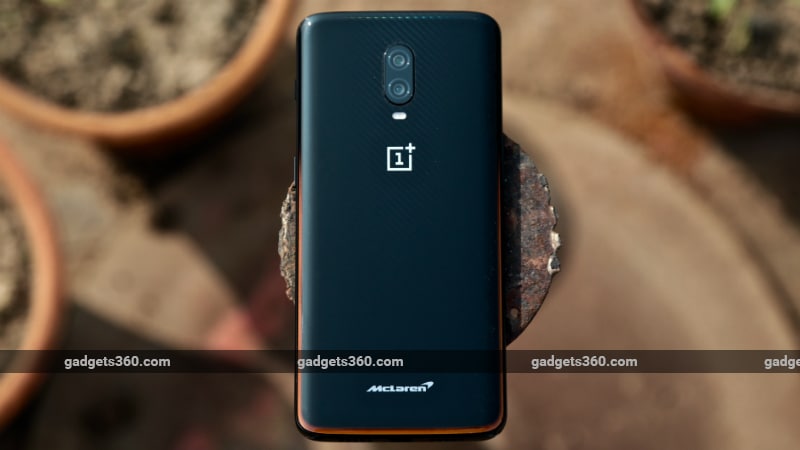 OnePlus, in collaboration with historic British racing brand McLaren, recently launched the OnePlus 6T McLaren Edition in India at a price of Rs. 50,999. In its illustrious history, the McLaren Formula 1 team has won eight constructors' championships and twelve drivers' championships. The name is associated with speed and that is the exact rationale behind this partnership as the OnePlus 6T's slogan is ‘Unlock The Speed'.

Aside from McLaren's signature Papaya Orange colour being wrapped around the borders of the phone, this special edition bumps up the RAM to a whopping 10GB, and features OnePlus' new Warp Charge 30 technology, which claims to offer a day's worth of power in 20 minutes. We have spent the past few weeks with the smartphone and here are our detailed impressions. We have already reviewed the OnePlus 6T in detail so this article will focus mainly on what sets the McLaren Edition apart and whether it is worth the extra money. We definitely recommend you read our OnePlus 6T review before proceeding, if you haven't done so already.

OnePlus has fully embraced McLaren's signature Papaya Orange colour scheme, incorporating it not only in the smartphone itself, but in the accessories as well as the meticulously crafted retail box.

The retail box is worthy of an article in itself and the attention to detail is remarkable. Perched on top is a book profiling the brand values and history of both McLaren and OnePlus. Flip through the pages of the book, and the phone reveals itself at the very end, nestled securely in a little enclave.

The box also contains a nifty little surprise. Fire up the McLaren AR application pre-installed on the phone, point the phone at the book, and the pages come alive. All the images turn into videos chronicling the history of both brands. It is very clever and adds to the feel-good factor.

Beneath the book, the box contains a carbon fibre case along with the accessories and requisite documentation. The sizeable Warp Charge 30 unit that ships with the smartphone is finished in Black and Papaya Orange and the thick braided USB Type-C cable is painted the same shade as well. OnePlus' new Warp Charge technology is said to offer a day's worth of power in 20 minutes, which we will analyse in detail later on in the review.

Last but not the least, the box contains contains a McLaren logo – called Speedmark – made out of McLaren designed Formula 1 AA-grade carbon fibre, which is said to be the same material used in the McLaren MCL33 2018 Formula 1 car. It looks classy and will be cherished by ardent Formula 1 fans. OnePlus in a statement said that over six Formula 1 cars' worth of carbon fibre was used to create the Speedmark logos that OnePlus 6T McLaren Edition buyers will receive.

The OnePlus 6T McLaren Edition features a carbon fibre pattern below the glass on the rear panel, and the signature McLaren Papaya Orange colour tastefully wrapped across the bottom of the smartphone. We are glad OnePlus did not go overboard with the orange colour and kept things simple and classy. That said, we feel the company could have painted the lock/ alert slider orange as well, which would have added a nice burst of colour to the side panel.

The position of the power and volume buttons, alert slider, and dual Nano-SIM tray are unchanged, and the phone feels extremely solid in the hand. There is a single speaker at the bottom that delivers loud but harsh and tinny audio. The good old 3.5mm jack is absent, which is sure to disappoint audiophiles. There's a USB Type-C to 3.5mm dongle in the box, which is also dipped in McLaren's traditional colours.

Apart from the presence of 10GB of RAM and the Warp Charge 30 unit, the OnePlus 6T McLaren Edition is identical to the regular variant in terms of specifications. It is powered by the Qualcomm Snapdragon 845 processor running at up to 2.8GHz with integrated Adreno 630 graphics. There's no microSD slot but the 256GB of internal storage should be enough for even the most demanding users.

The dual-SIM (Nano) OnePlus 6T McLaren Edition runs OxygenOS-based on Android 9.0 Pie. As mentioned above, the smartphone ships with a Warp Charge 30 charger, a braided USB-Type C cable, and a carbon fibre case with the McLaren logo which is of decent quality. There is also a screen protector pre-applied. On the connectivity front, the phone supports dual-band Wi-Fi 802.11ac, Bluetooth 5 with aptX and aptX HD, NFC, GPS, and GLONASS, and 4G VoLTE.

The 6.42-inch full-HD+ AMOLED display has an aspect ratio of 19.5:9 and is protected by Corning Gorilla Glass 6. It is very bright and has great viewing angles. By default, colours are punchy and some might find them a bit too saturated. OnePlus does offer five screen-calibration modes — Default, sRGB, DCI-P3, Adaptive, and Custom. The sRGB mode renders colours very accurately and the Custom mode allows users to calibrate the display to their liking.

The water-drop notch is not very intrusive and can be masked with with black bands on either side if you want to eliminate it entirely. There is a night mode, which acts like a blue light filter, Ambient Display, which shows a clock, a custom message, and notifications on the lock screen, as well as a greyscale reading mode.

The OnePlus 6T McLaren edition has 10GB of RAM vis-a-vis 8GB of RAM in the OnePlus 6T we reviewed last year. The day to day benefits of the bump in RAM were minimal and extremely incremental. We faced no issues with multi-tasking and playing heavy games on the 8GB variant and the experience was much the same here. Resource intensive games like Asphalt 9 did exhibit slightly faster loading times and the smartphone kept almost all apps running in the background.

Benchmark results were more or less the same and there was no discernible difference in battery life either. Just like the 8GB variant of the OnePlus 6T, the McLaren Edition survived a day of moderate to intensive use, with around 20 per cent left in the tank. In our HD video loop test, the phone lasted 13 hours and 30 minutes, just 15 minutes less than the 8GB variant.

The in-display fingerprint sensor is undoubtedly the OnePlus 6T's Achilles heel. It's great to show off, but in day-to-day use is a frustrating affair. The sensor is present underneath the front glass and the software displays an icon to guide you where to place your finger. Accuracy is spotty and we had to reposition our fingers quite often.

Having got used to the speed associated with physical fingerprint sensors, the noticeable pause exhibited by the in-display sensor got quite frustrating over time. The setup process is also quite slow and cumbersome. Thankfully, face recognition works like a charm, and OnePlus' implementation is one of the best out there.

The software experience is more or less the same as the standard edition of the OnePlus 6T. The McLaren edition ships with Android 9 Pie and the security patch at the time of reviewing was the December 2018 release. OxygenOS is fast, fluid, and responsive and is free from external bloat. There are three navigation modes on offer — on-screen buttons, Google's stock Android Pie gestures (swipeable home button), and OnePlus' own navigational gestures which are well implemented and very easy to master.

Along with the night mode and reading mode which we mentioned above, there are a ton of software features in OxygenOS. Some of the most nifty ones include gesture shortcuts like three-finger screenshot and double tap to wake, customisation options like themes and accent colours, an App Locker that lets you protect any app with a PIN, a Game Mode that lets notifications appear unobtrusively and allows you to prioritise bandwidth and system resources, and a feature called Smart Boost which keeps apps permanently in the phone's RAM to speed up performance.

Exclusive to the OnePlus 6T McLaren Edition is the McLaren Oxygen OS Theme which looks sleek and classy. Unlike many custom themes we have seen in the past, this black and papaya orange theme does not look garish and actually invokes memories of McLaren's signature colours. There is also a special animation for the in-display fingerprint sensor and stylish custom wallpapers.

OnePlus' new Warp Charge 30 technology claims to offer a day's worth of charge in 20 minutes. With the regular variant of the OnePlus 6T, which uses the old Dash Charge technology, we were able to achieve a 17 percent charge in just 10 minutes, which is pretty remarkable on its own. Warp Charge however takes things up a notch.

In 10 minutes, we were able to get from zero to 30 percent, with 20 minutes of charging topping up the battery to 48 percent. A full charge took less than an hour, which is quite impressive as well. Despite having a glass back, the phone lacks wireless charging, which OnePlus claims is because the technology is ‘too slow' at the moment.

Both the front and back cameras are exactly the same as in the regular variants of the OnePlus 6T. The primary rear camera is a 16-megapixel unit with a Sony IMX519 sensor and an aperture of f/1.7. You get optical and electronic image stabilisation with it. The secondary 20-megapixel Sony IMX376K sensor is used only for depth sensing and to speed up autofocus. On the front, there's a single 16-megapixel Sony IMX371 sensor with an aperture of f/2.0 and electronic stabilisation.

As we noted in our review of the 8GB OnePlus 6T, photo quality in the daytime is very impressive, with above average detail, and sharp focus. Colours appear slightly muted but HDR works well and macros look great, with smooth and consistent background blurring.

We were not too impressed with the portrait mode in our original review, and the situation has not improved. Edge detection is quite average and the camera struggles to focus in this mode at night.

A new feature introduced with the OnePlus 6T is Night Mode, in which the rear camera takes up to 10 frames in two seconds, and combines them to control noise. This mode is more of a gimmick as its hard to notice any discernible difference and the processing is quite slow. Shots taken at night in the standard mode are overly sharpened but are quite bright.

The 16-megapixel selfie shooter produces sharp and vibrant photos in well-lit situations but struggles in the dark. Along with the aforementioned night mode and portrait mode, a fully featured Pro mode, Time-lapse mode, and Panorama mode are also offered. Video recording maxes out at 4K at 30fps or 60 fps for the rear camera. Footage is quite stable and has an adequate amount of detail. Quality does take a dive at night though.

Verdict
The OnePlus 6T McLaren Edition will definitely appeal to fans of McLaren and Formula 1 in general. This is more than just a new paint job. The meticulously crafted retail box, exclusive accessories, and the speed mark logo made from carbon fibre extracted from an actual McLaren Formula 1 car elevate the entire experience and makes it quite special.

Fans of the sport will definitely appreciate this effort by OnePlus. Everyone else however should stick to the regular variants of the OnePlus 6T (Review) which offer the same well optimised software package and vibrant display for much less money. Warp Charge definitely lives up to its name but the fast charging solution OnePlus bundles with the regular OnePlus 6T will be fast enough for most users. Overall though, the performance gains with the McLaren edition are incremental and hard to notice in day-to-day use.