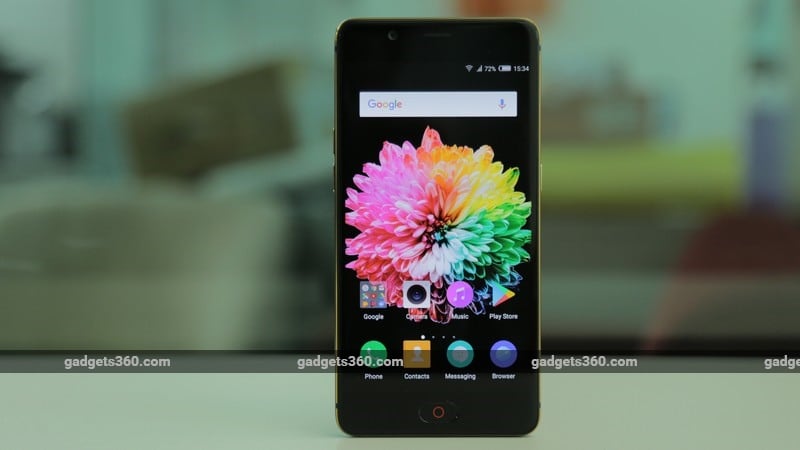 ZTE's Nubia subsidiary has been making decent smartphones for the Indian market for quite some time now. We were really impressed with the  Z11 mini S (Review) and its successor, the Z17 Mini (Review) did well in testing too. One of the company's newest models, the Nubia M2, boasts of some good specs on paper and we hope it will live up to the same standard.

Launched at a price of Rs 22,999, the Nubia M2 ticks all the boxes of things you would expect from a modern smartphone, including dual rear cameras, a metal unibody, and the capable Snapdragon 625 SoC. We dig deep to see if it is as good as it seems in the real world.

Just like the other Nubia smartphones, the M2 has a simple design. It is comfortable to hold in the hand thanks to the curved edges, and the weight feels about right. It has 2.5D curved-edge glass on the front which blends into the metal body seamlessly. The bevelled edges all around our black review unit were finished in gold which looks good. The back feels premium and has antenna bands running along the top and bottom. Nubia branding is prominent but is finished in a subtle gold shade. The dual camera module at the back gets a red highlight just like other smartphones from the company.

The 5.5-inch Amoled display sports a full-HD resolution making the panel push out 401 pixels per inch. We found the display to have good contrast and deep blacks, but if you don’t like it, you get the option to tweak the colour temperature. Brightness is good but the display might get a little tough to read under direct sunlight.

Nubia has positioned the fingerprint reader below the display, with capacitive touch buttons on either side. The buttons are backlit and light up with the display. The power and volume buttons are easy to reach. The hybrid dual-SIM tray is positioned on the side and you can pop a microSD card into the second slot instead of a SIM. At the bottom, there's a USB Type-C port along with a speaker grill and 3.5mm headphone socket.

Powering the Nubia M2 is the tried and tested Snapdragon 625 SoC. This octa-core processor is paired with 4GB of RAM and 64GB of storage, which is expandable via the hybrid SIM slot. You can use a microSD card of up to 200GB with this smartphone. The Nubia M2 supports both 4G and VoLTE. Apart for this, it has Bluetooth 4.1, WiFi ac, GPS and Glonass. Sensors on the M2 include a light sensor, proximity sensor, gyroscope and compass.

Nubia ships the M2 with Android Marshmallow which is outdated now, and results in some points being cut from our scoresheet. This is most likely because of the custom Nubia UI on top of Android.

Nubia UI 4.0 looks a little different than stock Android and the company has made quite a few changes. While the notifications and the quick toggles look somewhat familiar, the Settings app is rearranged forcing you to search around a little. The functions of the two capacitive buttons can be reversed but the UI uses the same button for Back and Overview button. A single tap on the capacitive button will tak you back a step while long-pressing it will display the list of running apps. The other button is for the Menu function which was dropped from Android long ago. If you are used to the standard Android navigation layout, this can get a little annoying.

Nubia has kept bloatware to a minimum which is a welcome move. There are edge gestures by which multiple features can be triggered. You can swipe down from the edge of the screen to switch between apps or double-tap on the left edge to go back. Nubia has also included split-screen multitasking, an Android Nougat feature, on the M2. Security patches weren’t up to date on our unit as it showed the most recent one was dated March at the time of review.

The Nubia M2 posted some good benchmark numbers. In AnTuTu, it returned 63,503 points, and in Geekbench 4 the scores were 509 for the single-core test and 1921 for the multicore test. The phone handles day-to-day tasks very well and we did not experience any lag or stuttering when using it. 4GB of RAM onboard means that this phone can multitask with quite a few apps running in the background.

Even while gaming we found the Nubia to be cool most of the time, getting slightly warm only after long gaming sessions. We played Race Kings and Drifty Chase which ran without hiccups. The processor powering the Nubia M2 is known to be frugal and helps the phone deliver good battery life. In our HD video loop test, the smartphone managed to run for close to 15 hours. The 3630mAh battery is capable of powering the phone for over one day with light to medium use, without any issues. To top the battery up, Nubia ships the M2 with a Qualcomm Quick Charge 3 compatible charger.

For photography, the Nubia M2 has dual 13-megapixel cameras on the back. One is used as an RGB sensor while the other is handles monochrome data. Both are protected by sapphire glass. At the front, there's a 16-megapixel camera for selfies. The Nubia camera app is easy to use and offers quick toggles for HDR, shooting modes and filters. You get a Pro mode as well to make the most of the camera hardware. Most other modes are listed under “Camera Family”. One that stood out to us was the Mono Photo mode which lets you take monochrome photos using only one sensor.

Photos taken with the M2 turn out well in daylight and objects at a distance still have a decent amount of detail. Macros are good and the portrait mode does help in creating good separation between subjects and backgrounds. Light metering in daylight is usually fine but we had a few samples come out overexposed. Low-light photos aren’t all that great and most have a watercolour effect which could be because of noise compression. If you have good lighting around the subject you may be able to walk away with a decent image. Video recording for the primary camera maxes out at 4K and you also get the option to record at 1080p60fps or slow-mo video at 720p. The front camera takes good selfies in daylight and the screen lights up well enough for low-light shots.

The Nubia M2 looks pretty good and performs quite well. The display is nice to watch content on and battery life is impressive. Unfortunately, it runs an outdated version of Android and there is no news of updates at this point. Some users might find the UI confusing as well. Camera performance is good during the day but suffers in low light. Other devices such as the Moto G5s and the Xiaomi Mi A1 (Review) offer roughly the same hardware for less money, making the Nubia M2 feel overpriced.

Google Translate Gets Offline Translations, Conversation Mode in India
iPhone X, iPhone 8, or iPhone 8 Plus: Which One Should You Buy?