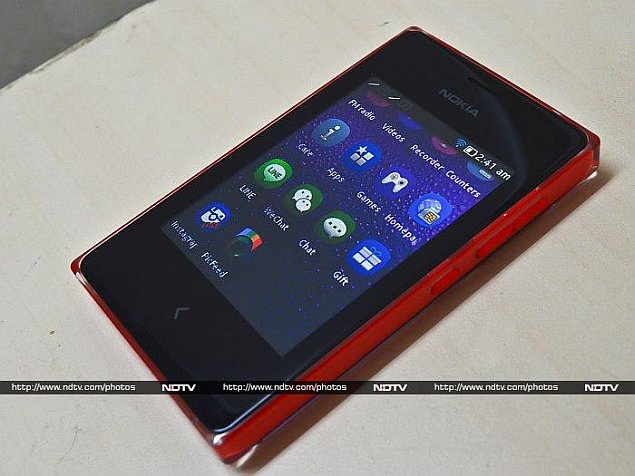 Nokia, the Finnish smartphone and tablet maker, has always been considered a game changer in the ever-evolving smartphone industry. As a rival to other world leaders including Samsung and Apple, the firm fell behind for a while but has now made a huge comeback with its line of Lumia devices running the Windows Phone OS.

At last year's Nokia World event, the company introduced six new handsets. While the high-end phablets took the spotlight, Nokia also made sure that it still caters to the needs of its budget customers. Introduced at the event, the Nokia Asha 502 budget smartphone is a shining example of how hard the firm is still trying to take over the low-end smartphone market by stuffing a bunch of impressive features into a small-sized device.

The Nokia Asha 502 is the successor to the Asha 501, and has some noticeable bodily and internal OS feature tweaks.

In hand, the Asha 502 feels both compact and strong. We found its build and overall design very appealing, and the phone itself is comfortable to carry around.

After spending a decent amount of time with the Asha 502, testing its battery life, camera, Internet connectivity, gaming capabilities and much more, here is what we think about this budget handset. 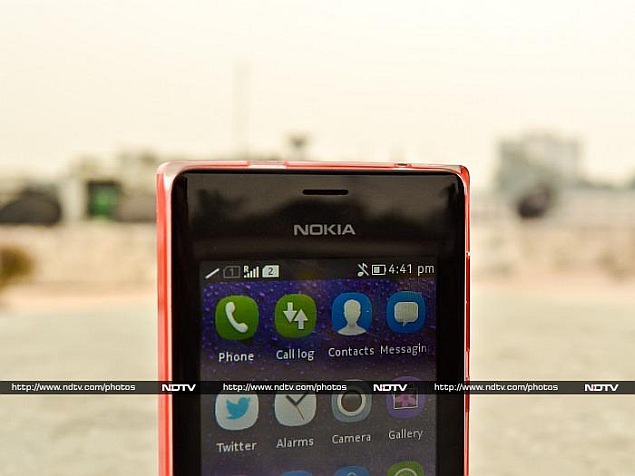 Build quality and design
The Nokia Asha 502 is extremely comfortable to hold, as its sharp corners give the user a better grip and reduce the chances of it slipping and falling. The small device measures 99.6 x 59.5 x 11.1mm and is well suited for users who have average or small hands. One its most distinctive features is the plastic monoblock body. The entire back panel and all four edges of Asha 502 are encased in a transparent material, giving the handset a crystallized effect.

Dedicated hard keys are usually found on the sides of a handset, and Nokia offers exactly what a user needs. Both the lock key and the two volume keys are closely placed on the right side of the handset, but are not so close that a user could accidently press the wrong button.

The buttons are easy to locate even in low-light situations as they are slightly elevated from the body surface. There is no dedicated camera button, but the feature can be accessed with a single swipe on the touchscreen. 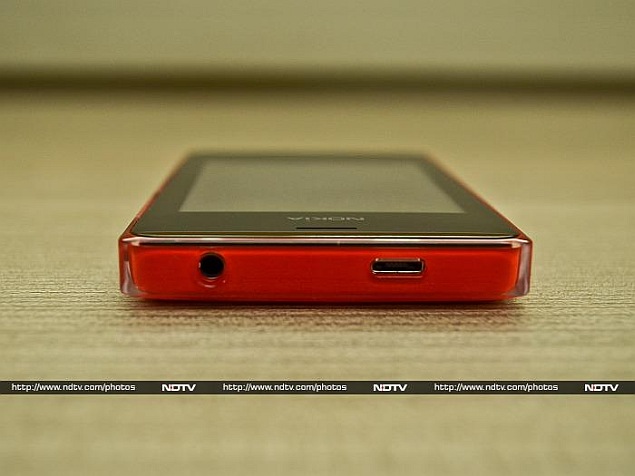 The Nokia Asha 502 has a small microphone on the bottom-right corner along with a Micro-USB connector and a 3.5mm headphone port placed on the left and right of the top panel respectively. Nokia has given the left edge of the handset a clean look. The rear panel has a camera centred at the top, with a small but powerful LED flash to its right. Just below the camera, a large Nokia logo is embossed into the transparent sheath. There's a thin speaker on the bottom, leaving the rest of the rear panel blank. 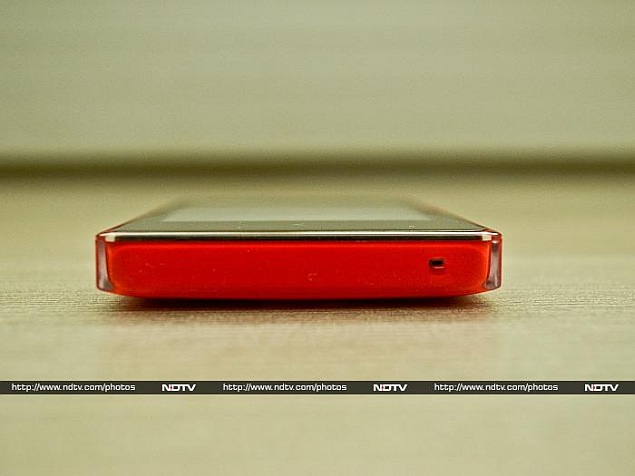 The front panel houses a small 3-inch screen and a speaker grille, with Nokia's logo between them. Below the screen is a single capacitive touch button for going back to the previous screen or closing apps.

On removing the Asha 502's back panel, one can see the removable battery taking up most of the space, with slots for the first SIM just above it. The slots for the second SIM and microSD card are on either side.

Display
The Nokia Asha 502's 3-inch screen is smaller than those of other devices in the same price segment. Users coming from phones with 4-5-inch screens might be able to get used to it, but if you like the feel of phablet devices that are currently popular, you'll find the small screen cumbersome to operate.

The Nokia Asha 502's multi-touch screen features a QVGA (320 x 240 pixels) resolution. The screen can display only 256,000 colours as opposed to the full range of 1.6 million colours that is the usual standard. When set to full brightness, the screen is easily visible under direct sunlight.

Software/Interface
The Nokia Asha 502 runs on the latest Asha OS, version 1.1, which is an update to the software used by the Asha 501. The OS uses simple swipe gestures for most actions, and the back button is mainly used to close apps and return to the main menu screen.

The Asha 502, like other Asha models, comes with a feature called Fastlane, which helps users access apps quickly, without searching through the main apps page. The Fastlane window shows the apps which have been used most recently. One can navigate to the Fastlane view by unlocking the device and simply swiping towards the right from the main apps page.

As seen on Nokia's higher-end handsets running Windows Phone 8 OS, the Nokia Asha 502 also allows users to change the positions of icons or delete entire apps by simply long-pressing on any icon.

The settings app gives you direct access to the Wi-Fi, Bluetooth, Flight Mode, and Dual-SIM settings, amongst others. The Personalisation section lets you select ringtones and vibration settings along with the wallpaper, lock screen image and Fastlane settings.

Since the Asha 502 is a budget handset, users will have to put up with limited customisation options for things like the Fastlane settings, and limited background apps.

The phone struggles to load heavy websites in its browser, but it can run optimised Java games such as Assassin's Creed 3 and Asphalt 6: Heat. The graphics are not impressive, and users who expect even average quality graphics will be disappointed.

The Asha 502 includes one of the most useful features that Nokia recently added to its Lumia phones, the Glance screen. Glance shows the time and notifications on the screen even after the phone has gone into standby mode.

Nokia's Xpress browser opens most websites quickly because data goes through Nokia's server where it is compressed before being delivered. However, it fails when it comes to running heavy Java-enabled websites. Up to six tabs can be open at any time. Some of the popular apps which come preloaded on the device are Facebook, Twitter, Line, Wechat and WhatsApp. We also tried watching some Youtube videos on the handset, which turned out better than we expected.

Camera
Even though it's a budget device, the Asha 502 has a 5-megapixel fixed-focus rear camera with a f/2.4 aperture and an LED flash with a range of one metre. There's no front-facing camera and very few camera software features.

The camera interface of Asha 502 is pretty easy to operate. The camera app can be directly accessed from the lock screen by swiping upwards. Once open, you can long-press on the screen to access the camera settings which include flash adjustment options, self-timer, white balance, filters, camera shutter sound and a choice of five resolutions. 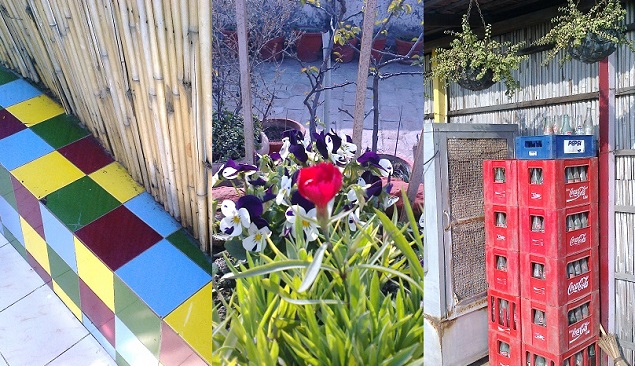 The Asha 502's camera is just about average when it comes to image quality and clarity despite its 5-megapixel resolution. Images captured in bright sunny conditions look good, but like most such handsets, the Asha 502 fails in low-light situations. You can't see much detail on the device's small screen, but images shot in low-light are grainy and unclear.

Features and performance
In use some stuttering was noticeable while swiping between screens, and there was a few seconds' lag while closing applications. However, by long-pressing the back button, we were able to kill apps faster. Nokia says you can double-tap the screen to wake the phone from sleep, but 6-10 were usually required before the feature worked.

The phone has very little internal storage, with only a few MB free for users. However, the handset comes bundled with a 4GB microSD card, and you can use cards up to 32GB in size. We also noted that it took a considerable amount of time for the handset to show the contents of the memory card, which we suspect is due to the low amount of RAM.

One of the features Nokia has been known for in India is call quality. The Asha 502 was decent enough, and it did not lose network connectivity even in basements. Similarly, people on the other end of our calls also reported clear quality.

The 1010mAh battery was very impressive, as the phone made it through two consecutive days of usage with a single charge.

The FM radio on Nokia Asha 502 is average and the headset needs to be plugged in for the application to work.

The Nokia Asha 502 is undoubtedly a fingerprint magnet. After a little time, the screen as well as the crystalline cover will accumulate smudges, and you'll have to wipe the phone repeatedly to make it look good. 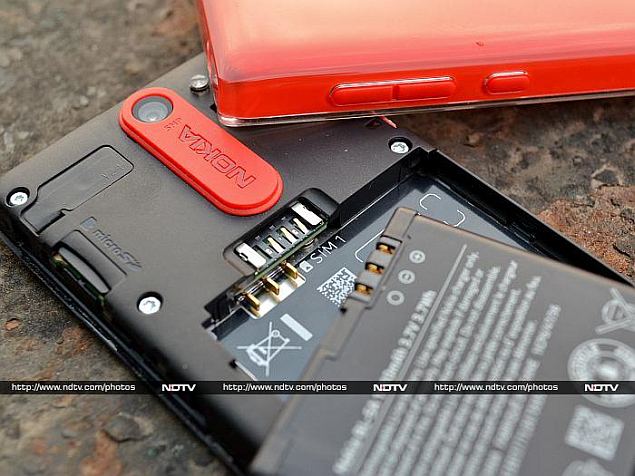 Verdict
To sum it up in few words, the Nokia Asha 502 is a very basic phone with the simplest features one can expect in this segment. The handset is best suited for light users, who will use it mainly for calls, texts and very occasional social networking.

The handset lacks features that other manufacturers offer in this price range, such as 3G connectivity, bigger display, multi-touch functionality and a better processor for quick operations. A few alternatives to consider are Samsung Galaxy Pocket Neo, Samsung Rex 90 and LG T585. The Asha 502 thus has a lot of room for improvement.

The handset is priced at Rs. 5,739 on the official Nokia India website, but it can be bought for around Rs. 5,500 from online retailers such as Flipkart and Snapdeal.