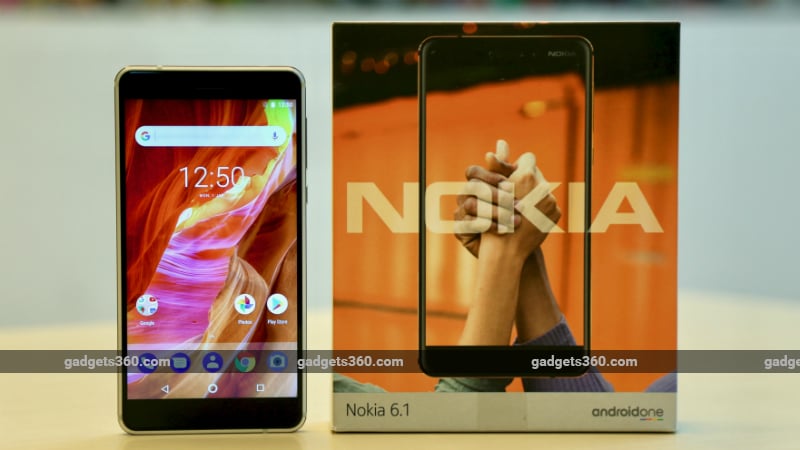 Nokia, the bruised and battered stalwart which had almost faded into obscurity, was brought back into the public consciousness last year thanks to a small Finish company called HMD Global. The Nokia 6 was HMD Global's first foray into the Android smartphone world. Lauded for its build quality and design, the smartphone was let down by its underpowered processor and underwhelming cameras. Now, one year later, we have the new Nokia 6 (2018), which is more or less an iterative update, and improves upon its predecessor in these key areas.

With a Qualcomm Snapdragon 630 processor under the hood, an improved camera with Zeiss optics, and a tweaked design, the Nokia 6 (2018) aims to compete with the likes of the Xiaomi Redmi Note 5 Pro (Review) and the Moto G5S Plus (Review). Our first impressions of the smartphone were quite positive, and now we've been able to spend enough time with it to bring you our full review.

Last year's Nokia 6 was lauded for its tank-like build quality and industrial design. HMD Global has stated that its biggest priority while designing the new Nokia 6 was maintaining the build quality of its predecessor. True to its word, the Nokia 6 (2018), which has been milled from a single block of 6000 series aluminium, feels incredibly solid in the hand.

During our review, we dropped the phone many times and it did not incur any damage whatsoever. In fact, to kick things up a notch and really test Nokia's durability claims, we tried to bend the smartphone. All our attempts came to naught. Just like its predecessor, the Nokia 6 (2018) is surely a contender for the most durable smartphone of the year.

The solid construction comes with its own set of caveats though. At 8.5mm, the smartphone is not the slimmest out there and it feels quite bulky in the hand. The thick borders above and below the screen do not help matters in the slightest. We felt that single-handed use over long periods was not very comfortable as the phone is a bit too wide.

The Nokia 6 (2018) is available in three different two-tone finishes. The accents around the rear camera and the frame add some much-needed flair to what is otherwise an understated industrial design.

The power and volume buttons on the right edge are ergonomically placed. The left edge of the smartphone is blank save for the hybrid dual-SIM tray, which makes you choose between a second SIM and a microSD card.

The rear camera and dual-LED flash are placed in an oval housing which has ZEISS emblazoned in bold letters. The fingerprint sensor, which is found right below the camera housing, is a letdown on all fronts. Not only is is it slow and inaccurate at times, but the location is quite unergonomic. We found our fingers hitting the LED flash rather than the sensor on more than one occasion.

Last year's Nokia 6 was hampered by its underpowered Qualcomm Snapdragon 430 processor. This time around, HMD Global has equipped the Nokia 6 (2018) with a much more powerful Snapdragon 630 clocked at 2.2GHz.

There are other substantial updates as well. The outdated Micro-USB port has been replaced with a USB Type-C port, and Nokia is now committed to Android One, which hopefully means even more frequent software updates. HMD Global has also brought over two features seen in last year's flagship Nokia 8 to the mid-range smartphone: Bothie mode and OZO audio.

While Xiaomi has a penchant for offering several variants of its smartphones, Nokia has decided to keep it nice and simple with the Nokia 6 (2018). At the moment, the smartphone is only offered in one variant, with 3GB of RAM and 32GB of internal storage, which can be expanded using a microSD card, though that is expected to change in the near future.

HMD Global announced a renewed collaboration with imaging brand Carl Zeiss last year, the fruits of which were seen in the Nokia 8. The company has now brought Zeiss optics to its mid-range offerings as well. On the imaging front, the Nokia 6 (2018) has a single 16-megapixel rear camera with ZEISS optics, a dual-tone LED flash, an f/2.0 aperture, and 1-micron pixels. On the front, the smartphone has an 8-megapixel fixed focus camera with 1.12-micron pixels and an f/2.0 aperture.

The original Nokia 6 was a sleek and well-built smartphone that did not have the power to match its looks. With the Snapdragon 630 under its hood, the Nokia 6 (2018) is a different beast altogether. During our review period, it tackled both day-to-day tasks and intensive workloads with ease.

Even the heaviest games did not exhibit any dropped frames or stutters, which was common in last year's Nokia 6. We were also pleased to report that this smartphone did not get warm even when playing resource-intensive games, navigating around town with the GPS, or recording videos in full-HD.

The 5.5-inch LCD screen is a step up from the one on last year's model, with punchier colours and higher brightness. However, the viewing angles could have been better.

In our experience, calls were clear and crisp. 4G connectivity was good even in areas known to have spotty network reception. While the single loudspeaker located next to the USB Type-C port delivers loud and clear audio, it is a step down from the stereo speakers of last year's Nokia 6. The bundled earphones are strictly average as well, which is not uncommon at this price point.

Last year, HMD Global chose to differentiate its smartphones with near-stock Android. Now, the company has taken things to the next level by embracing Google's Android One programme. As a result, the Nokia 6 (2018) has no third-party bloat whatsoever. There are a few non-intrusive value additions, such as the 'Glance screen' which shows notifications for missed calls, alarms, and notifications without waking the phone from sleep, and a couple of motion-triggered gestures. HMD Global has promised updates to Android P as well as Android Q, when they are released.

The Nokia 6 (2018) also has face recognition built-in. While face unlock works well when lighting conditions are favourable, it struggles in dimly lit environments and in direct sunlight.

In our HD video loop battery test, the Nokia 6 (2018) lasted 11 hours, 45 minutes, which is quite good. In terms of real-world performance, we never found ourselves reaching for the charger before the wee hours of the night. The phone easily lasted us the whole day with medium to intense use, with juice left over for more. In our tests, the bundled fast charger took the Nokia 6 (2018) from an empty tank to around 40 percent in 30 minutes, which is fairly impressive.

The cameras on the Nokia 6 (2018) are a bit of a mixed bag. Even with the addition of the ZEISS moniker, the 16-megapixel rear camera struggles in low light. Shots taken after dark had a fair bit of noise and lacked detail. The autofocus was also quite inaccurate and we had to manually tap the screen on several occasions.

That said, the camera performs admirably when there is adequate light. During the day, the camera managed to get the exposure right most of the time, and capture a hefty amount of detail. Even shots taken in favourable lighting indoors were crisp and detailed. The dual-LED flash does a decent job of lighting up scenes. Colour reproduction however is not the this phone's strong suit. In auto mode, the white balance was always off-kilter with colours looking slightly pale and muted

Thankfully, there's a powerful professional mode that lets you control the exposure, ISO, shutter speed, white balance, and autofocus. By tweaking the settings slightly, we managed to get accurate colours. We hope Nokia can fix this problem with a software update, as most users will stick to the auto mode which as of now has trouble rendering colours accurately.

The 8-megapixel fixed focus front camera performs well when the lighting conditions are good, and is actually a cut above the front camera found on last year's Nokia 6. Image quality does take a dive when the light goes down, and there's no front flash to compensate for that.

HMD Global has equipped the Nokia 6 (2018) with the ability to take photos/videos with the front and rear cameras at the same time. While this feature has been saddled with a truly unfortunate marketing term,-Bothie - it is actually pretty nifty. You can record your reactions while your dog is chasing its own tail or your kid is doing something endearing. Unfortunately, the quality of both cameras takes a slight dip when using this mode.

Verdict
The Nokia 6 (2018) has terrific build quality, great performance, good battery life, and pure Android with the promise of regular software updates. The Nokia brand name has always been associated with solid phones, and the Nokia 6 (2018) proudly carries that flag forward. It might not be the flashiest smartphone around but is very capable nonetheless.

That said, the Nokia 6 (2018) is not a home run by any means - it does not have an 18:9 display which is fast becoming the norm. The rear camera struggles in low light, and has colour rendition issues in auto mode. Its biggest competitor is the Redmi Note 5 Pro (Review), which is priced starting at Rs 14,999, offers an 18:9 display, and has better hardware. What the Redmi Note 5 Pro lacks though is stock Android and the same level of ruggedness as the Nokia 6 (2018).