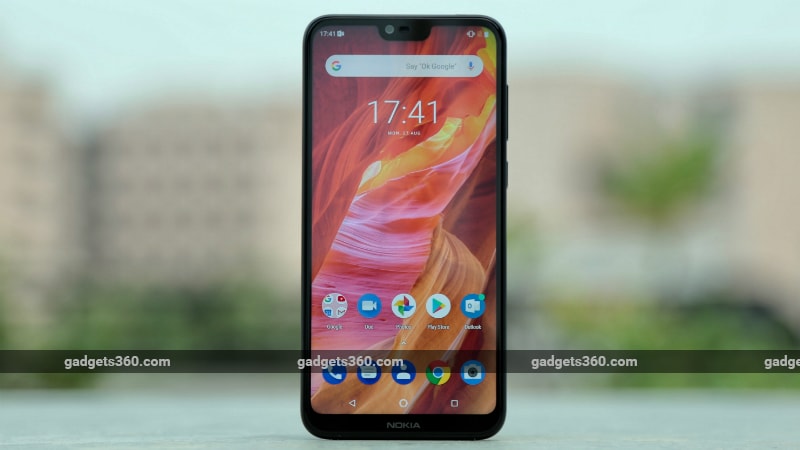 2018 will be remembered as the year when display notches became ubiquitous. The notch is undoubtedly a contentious issue in smartphone design, but it is a necessary evil in order to make today's narrow-bordered smartphones a reality. HMD Global, the company that brought Nokia back into the smartphone game last year, has now embraced this design trend with the Nokia 6.1 Plus and Nokia 5.1 Plus.

The Nokia 6.1 Plus, which was launched in China back in May as the Nokia X6, is a part of the Android One initiative and runs a stock build of Android 8.1 Oreo. It features a 19:9 display, a dual camera setup at the rear, and a glass and metal design. Priced at Rs. 15,999, it competes head-on with the likes of the Xiaomi Redmi Note 5 Pro (Review), Xiaomi Mi A2 (Review), and Asus ZenFone Max Pro M1 (Review). Is Nokia's latest budget smartphone worth a buy? Let's find out.

The Nokia 6.1 Plus features glass on the front and back, with an aluminium frame for rigidity. There is a notched display up front with sizeable borders, and the Nokia logo on the chin. Thanks to the tall aspect ratio and curved edges, the smartphone is compact and pocketable. However, one-handed use is quite difficult.

When it goes on sale on August 30, the Nokia 6.1 Plus will be available in three colour options - Gloss White, Gloss Midnight Blue, and the one our review unit came in, Gloss Black. The smooth glass back looks attractive and classy but picks up a lot of smudges and fingerprints. It is also incredibly slippery - a case is recommended to give you a decent grip.

The accents around the rear camera module, fingerprint sensor, power button, and volume buttons add some much-needed flair to what is otherwise an understated design. We had some reservations about the build quality of this phone in our first impressions, on account of its low weight. However, the Nokia 6.1 Plus has stood up to ordinary daily usage quite well over the course of our review period.

The left of the Nokia 6.1 Plus is blank save for the SIM tray, which makes you choose between a second Nano-SIM and a microSD card. The right side has the volume rocker and power button which are chunky, tactile, and well within reach.

The dual-camera setup is placed in a pill-shaped housing, underneath which is a circular fingerprint sensor and a vertically oriented Nokia logo. There's a single loudspeaker next to the USB Type-C port at the bottom, which delivers loud and clear audio, but is a step down from the stereo speakers of the original Nokia 6 (Review).

Nokia 6.1 Plus specifications and display

HMD Global has equipped the Nokia 6.1 Plus with the Qualcomm Snapdragon 636 processor, which is also found in the similarly priced Xiaomi Redmi Note 5 Pro, as well as the Asus ZenFone Max Pro M1, which is priced starting at Rs. 10,999. Additional specifications include a 3,060mAh battery, 4GB of RAM, 64GB of storage that can be expanded using a microSD card (up to 400 GB).

The Nokia 6.1 Plus is a part of the Android One initiative and runs a stock build of Android 8.1 Oreo with a guarantee of regular updates. Connectivity options include dual 4G VoLTE, Wi-Fi 802.11a/b/g/n/ac, Bluetooth 5, FM radio, GPS/ A-GPS, GLONASS, USB Type-C (USB 2.0), and a 3.5mm headphone jack. This phone supports dual SIMs (Nano) and both can simultaneously latch onto 4G networks.

The Nokia 6.1 Plus has a 5.8-inch full-HD+ display with an aspect ratio of 19:9 and Corning Gorilla Glass 3 for protection against scratches. There is a notch up front which is thankfully quite small and does not get in the way of games and videos. Despite the notch, the screen is not borderless, and the chin in particular is pretty thick. The display is bright and punchy, and has good viewing angles. Colours are vivid and outdoor legibility is decent.

The Nokia 6.1 Plus delivered a smooth and consistent user experience, tackling everything we threw at it — from basic day-to-day tasks such as browsing the Web and using social media applications, to intensive workloads — without any issues. App load times were quick and UI animations were butter smooth. Games like Asphalt 9 also ran quite smoothly, with no stutters or dropped frames.

Benchmark scores were in line with those of other Snapdragon 636-powered smartphones. The Nokia 6.1 Plus managed scores of 116,134 in AnTuTu, 34fps in GFXBench T-Rex, 10fps in GFXBench Manhattan 3.1, and 1328 and 4,936 respectively in Geekbench's single- and multi-core tests. In our experience, calls were clear and 4G connectivity was consistently solid.

HMD Global has so far focused on clean, fluid software, and timely updates. The Finnish company embraced Android One at the beginning of this year, which means an optimised software experience with stock Android 8.1, two years of Android version updates, and three years of monthly security updates, all guaranteed. HMD Global has promised updates to Android Pie as well as Android Q, as and when they are released.

The software is fluid and very responsive. While there is no third-party bloat, there are a few nifty value additions such as the 'Ambient Display' feature that shows notifications for missed calls, alarms, and notifications without waking the phone from sleep. You can also perform a few gestures such as turning the phone over to reject a call, or picking it up to mute the ringtone.

The Nokia 6.1 Plus supports face recognition, using its 16-megapixel front camera. The process is quite slow, even when lighting is favourable. Recognition is quite erratic in low light and also under very bright sunlight. Thankfully, the rear-mounted fingerprint sensor is snappy. It can also be used to show the notification shade with a downward swipe.

In our HD video loop battery test, the Nokia 6.1 Plus lasted 12 hours and 10 minutes. Real-world performance was quite solid, but not spectacular. The smartphone easily got through a 12-hour day with medium to heavy use, with around 20 percent left in the tank. Our usage involved around an hour or two of navigation using Google Maps, frequent use of social media applications, games such as the recently launched Asphalt 9, and taking a couple of photos and selfies.

The phone supports Quick Charge 4.0, but only a standard 10W charger is included in the box, which means that you'll need more than two and a half hours for a full recharge.

There are a number of features in the camera app, such as as a live bokeh mode, AR stickers, dual-sight mode to superimpose shots taken with the front and rear cameras simultaneously, and AI-assisted portrait lighting. Portrait shots were quite impressive with good edge detection and smooth gradients between the subject and the background.

AR stickers are implemented well and can be used with both the front and the rear camera. The AI-assisted portrait lighting feature needs a lot of work at the moment. Edge detection was poor, and most of the options just overexposed the background.

During the day, the rear camera performed quite well. Images had a good amount of detail and the the sensor's dynamic range was above average. Even shots taken in favourable lighting indoors were crisp and detailed. Colours however appeared slightly washed out regardless of lighting conditions.

Low-light performance was a bit of a mixed bag. The level of detail was adequate and is a step up from the Nokia 6.1, but the camera struggled with autofocus at times.

The front camera produces decent shots in favourable lighting but has trouble with exposure metering. In low light, it struggles to pull in enough light. The front camera can also shoot bokeh shots via software algorithms, which came out looking decent. There's no proper front LED flash, but just a screen flash that lights up the entire display.

Video recording maxes out at 1080p for the front camera, while the rear module is capable of 4K video recording. You can livestream video to YouTube and Facebook directly from the camera app, and this feature also works in dual-sight mode. The quality of videos is decent at best.

Nokia 6.1 Plus in pictures

Verdict
The Nokia 6.1 Plus offers great performance, clean and fluid software, a punchy and vibrant display, and the promise of timely updates. With a sleek glass-backed design, compact dimensions, and a 19:9 display, the Nokia 6.1 Plus addresses most of the shortcomings of the Nokia 6.1, which was launched earlier on in the year. It is also priced much more aggressively.

All is not smooth sailing though. The rear camera setup, while much improved from the Nokia 6.1, still cannot match up to the competition. It performs admirably in favourable light but struggles in low light. The front camera is also underwhelming. That said, the Nokia 6.1 Plus is a capable, well-rounded smartphone that will appeal to fans of stock Android.

Potential buyers should also take a look at the Xiaomi Redmi Note 5 Pro (Review) and Asus ZenFone Max Pro M1 (Review), which cost less and offer better cameras, but miss out on the benefits offered by Android One. The Xiaomi Mi A2 (Review) does have a better rear camera as compared to the Nokia 6.1 Plus but has average battery life and lacks a headphone jack and a microSD card slot.

Railway Minister Says 6,000 Stations to Be Wi-Fi Enabled in Next 6 Months
All Post Offices to Be Linked to India Post Payments Bank by December 31