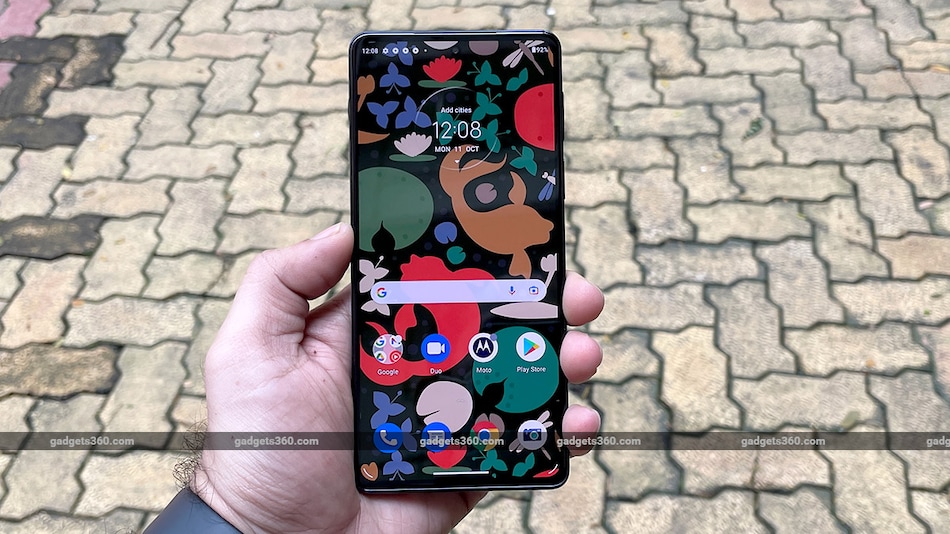 The Motorola Edge 20 Pro is priced at Rs. 36,999 in India and only one configuration with 8GB of RAM and 128GB of storage is on offer. You can choose between Midnight Sky and Iridescent Cloud colour options. I had a Midnight Sky unit for this review.

The Edge 20 Pro looks similar to the Edge 20 (Review) and is instantly recognisable as a part of the Edge 20 series. The Motorola Edge 20 Pro is definitely a looker. While it isn't as sleek as the Edge 20, it feels more premium. The Edge 20 Pro sports a big 6.7-inch display with a camera hole at the top-centre and thin bezels all around.

Motorola says that the frame of the device is made of aluminium, but there's a resin coating which robs it of that premium feel. The Edge 20 Pro has a side-mounted fingerprint scanner which might be a deliberate move to undercut competition using in-display fingerprint scanners. The buttons are on the right, and I found them to be slightly too high, with the volume buttons needing a stretch to reach. The left only has the dedicated button to summon Google Assistant. The bottom of the frame has the USB Type-C port, primary microphone, loudspeaker, and SIM tray, while the top only has the secondary mic.

The camera module is in the top left corner of the rear, and it doesn't protrude as much as the one on the Motorola Edge 20. This is because of the greater overall body thickness thanks to this phone's bigger 4,500mAh battery. Motorola has curved the back along the sides which makes it comfortable to grip. The Edge 20 Pro is slightly heavier and bulkier than the Edge 20, but has the same IP52 rating for dust and water resistance.

The Motorola Edge 20 Pro has a big 6.7-inch AMOLED display with HDR10+ support. The panel has a 144Hz refresh rate which is among the highest at this price point. It also has a 576Hz peak touch sampling rate. Motorola has used Corning Gorilla Glass at the front and the back for protection.

Powering the Edge 20 Pro is the Qualcomm Snapdragon 870 SoC, which we have also seen powering the OnePlus 9R (Review), iQoo 7, and Mi 11X. Motorola offers this smartphone in a single configuration only, with 8GB of LPDDR5 RAM and 128GB of UFS 3.1 storage. You don't have the option to expand storage. However, you do get a RAM boost feature which assigns 2GB of storage to be used as RAM. Motorola could have offered a higher-priced variant with 256GB of storage for those who are willing to pay more.

The Motorola Edge 20 Pro has support for Bluetooth 5.1, Wi-Fi 6, NFC, dual 5G, 4G VoLTE, and six satellite navigation systems. It packs in a 4,500mAh battery and ships with a 30W charger in the box. The charger has a USB Type-C output and you get a Type-C to Type-C cable in the box.

Software on the Edge 20 Pro is clean and relatively free from bloat. This phone runs Android 11 and my unit had the September security patch. You also get a promise of two years of Android software updates which should keep the device from feeling outdated. Motorola's MyUX customisations are available for you to customise the look of the smartphone. You can change the colour and fonts of different UI elements. The Edge 20 Pro had Facebook and a few Google apps installed out-of-the-box, and you can uninstall Facebook.

Motorola lets you enable several custom gestures from within the Moto app. For example, you can tap and hold with three fingers to take a screenshot, or flip the smartphone over to silence an incoming call. There are also traditional Moto gestures such as a double-chop to toggle the flashlight, and double-crank to launch the camera app. Motorola's Ready For feature, which we tested with the Motorola Edge 20 Fusion, is also present on the Edge 20 Pro.

For those looking for performance, the Edge 20 Pro is right up your alley. The Qualcomm Snapdragon 870 SoC is powerful enough to run almost anything you throw at it without any hiccups. With 8GB of RAM, multitasking isn't an issue, and I could run multiple apps simultaneously while switching between them. The big AMOLED display with its high refresh rate is good to consume content on. Motorola has set the refresh rate to Auto by default, which lets the smartphone adapt it based on what you are doing. You can also manually set it to 60Hz or 144Hz. The Edge 20 Pro's display had good viewing angles and the speaker was loud but a tad tinny. I found the side-mounted fingerprint scanner to be quick to unlock the device.

If you are planning to play games, the Edge 20 Pro has you covered. I played Battlegrounds Mobile India (BGMI) which defaulted to the HD graphics and High frame rate settings. I could play the game without any issues. The smartphone did not show any signs of slowing down and maintained a steady frame rate. After playing for 15 minutes, I noticed a three percent drop in the battery level. The smartphone wasn't warm to the touch after gaming.

In terms of battery life, the Motorola Edge 20 Pro benefits from a slightly bigger battery compared to the Edge 20. I could use this smartphone for about a day and a half without needing to look for the charger. In our HD video loop test, the Edge 20 Pro managed to run for 15 hours and 2 minutes which is slightly lower than the 15 hour, 49 minute time posted by the OnePlus 9R. The Motorola Edge 20 Pro had its screen refresh rate set to Auto. Charging is quick but not the best on the market. The supplied 30W charger was taking of getting the Edge 20 Pro from zero to 58 percent in 30 minutes, and to 93 percent after an hour.

Motorola has used the same primary camera sensor on the Edge 20 Fusion (Review), Edge 20, and Edge 20 Pro. This 108-megapixel primary camera has an f/1.9 aperture and saves 12-megapixel pixel-binned shots. The secondary camera on this phone is a 16-megapixel ultra-wide-angle camera with a 119-degree field of view, which is also capable of shooting macro shots. This is more useful than a 2-megapixel dedicated macro camera. The third is a 5X telephoto camera with optical image stabilisation. It is also capable of going up to 50X digital zoom. For selfies, you have a 32-megapixel camera in the display's hole. The camera app on the Edge 20 Pro is easy to use and it remembers the last mode you've shot with, making it quicker to shoot multiple photos in similar conditions.

The Motorola Edge 20 Pro was quick to detect scenes and even suggest different shooting modes based on composition and subject. It did not have any trouble locking focus quickly and metering scenes correctly. Photos shot in daylight were good, and had decent detail. Objects at a distance were recognisable though this phone could have managed better details in the shadows. The ultra-wide-angle camera captures a much wider field of view but there is a noticeable drop in image quality. Objects at a distance aren't as crisp and detailed either.

Motorola's 5X telephoto setup makes it easy to shoot faraway objects. Details are adequate but you need to be steady while shooting or you will notice some blur in the output. You'll see a tiny viewfinder to help with framing while zoomed in, but this still isn't easy as there is a slight lag. As a result, I needed several attempts to frame an object while shooting at high zoom levels. At up to 50X digital zoom, even a slight movement will cause a blurry shot and you would be better off using a tripod for such shots.

Close-up shots turned out well. Objects had good detail and the Edge 20 Pro managed a soft blur for the background. Portrait shots were crisp with good edge detection but the AI boosts colour aggressively. I could also get close enough to objects to shoot clear macros. These had very good detail and are captured at 16 megapixels which allow you to crop and magnify them further if required.

Low-light camera performance reminded me of the Motorola Edge 20. Photos shot at night using the regular photo mode did not have the best details. Night mode does help to improve quality, but photos were still not up to my expectations.

Selfies shot in daylight as well as low light turned out well. These photos are 8 megapixels in resolution, pixel binned from the 32-megapixel shooter. Portraits had decent edge detection and the phone did let me change the intensity of the background blur before I took the shot. However the output had boosted contrast and looked a bit artificial.

Video recording tops out at 8K for the primary camera and 4K for the selfie shooter. The Edge 20 Pro also has a dual capture mode which lets you record videos from any two cameras on the device simultaneously. You can use the selfie camera along with the rear-facing primary camera, or use any two cameras at the back to record. Daylight videos shot at 1080p as well as 4K were well stabilised, however the EIS does not do a good job in low light, leading to a shimmer effect in footage.

Motorola is targeting the Rs. 20,000 to Rs. 40,000 market segment with its Edge 20 series. While the Edge 20 Fusion (Review) and the Edge 20 (Review) cater to the lower half of this segment, the Edge 20 Pro is shouldering the responsibility of the higher end. The Edge 20 Pro sports good hardware, and the software is free from bloatware.

While battery life is better on the Edge 20 Pro than the Edge 20, its camera performance does feel lacking compared to some of the competition. With OxygenOS potentially no longer being an option for purists, the Motorola Edge 20 Pro does position itself right against the OnePlus 9R (Review).