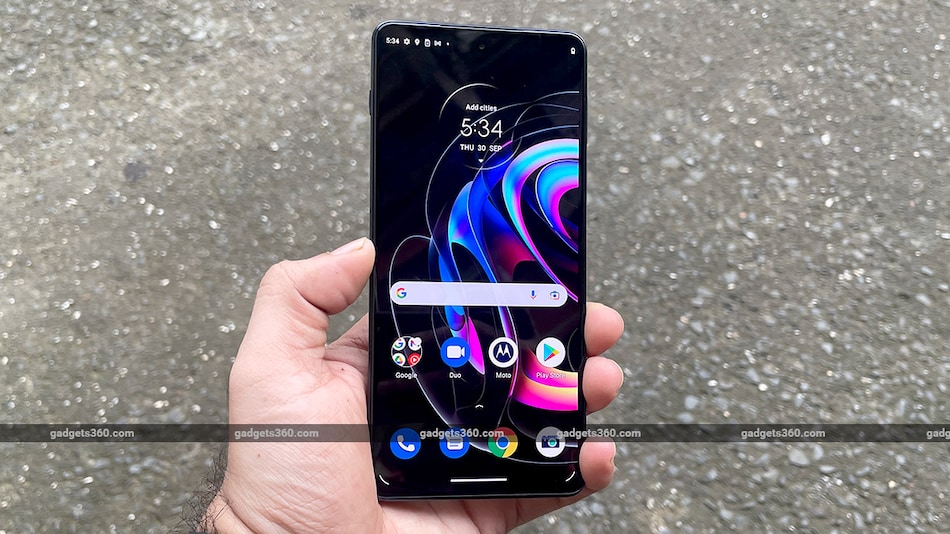 Motorola Edge 20 Pro is the third smartphone to join the Edge series in India after the Edge 20 Fusion and the Edge 20. Like the naming suggests, the Edge 20 Pro is positioned at the top of this series, and so it will take on competition such as the OnePlus 9R. Motorola claims to have packed in good hardware and is confident that the stock Android experience it offers will help reel buyers in. I got my hands on this smartphone, and here are my first impressions of it.

The Motorola Edge 20 Pro is priced at Rs. 36,999 in India for the lone configuration, which has 8GB of RAM and 128GB of storage. You can choose between Midnight Sky and Iridescent Cloud colour finishes.

The Motorola Edge 20 Pro is a lot like its younger sibling, the Edge 20, when it comes to design and also some of its specifications. Let's take a look at the design first. The new Edge 20 Pro looks premium and has a big 6.7-inch AMOLED display with a tall 20:9 aspect ratio on the front. This smartphone is narrow and tall, so while it is easy to hold it in one hand, reaching the top of the display with a thumb is not possible without shuffling the phone.

This AMOLED display has full-HD+ resolution along with a fast refresh rate of 144Hz and a maximum touch sampling rate of 576Hz. If all this sounds familiar, it's because the Motorola Edge 20 boasts of the same display specifications. One difference with the Edge 20 Pro is the use of Corning Gorilla Glass 5 at the front as well as the back.

Motorola Edge 20 Pro packs in a 4,500mAh battery and has support for 30W fast charging

Motorola says the midframe of the Edge 20 Pro is made out of an aluminium alloy with a resin coating. This gives it a glossy finish, but it does not feel all that premium. Motorola has gone with a side-mounted fingerprint scanner on the right, along with the volume buttons. Competitors such as the OnePlus 9R (Review) however boast of in-display fingerprint scanners. The Motorola Edge 20 Pro does have a dedicated button for Google Assistant, on the left. You won't find a 3.5mm headphone jack on this device, but the USB Type-C port, loudspeaker, and SIM tray are at the bottom while the secondary microphone is at the top.

At the back, you'll find the triple camera setup consisting of a 108-megapixel primary camera, an 8-megapixel telephoto camera with 5X zoom and optical image stabilisation, and a 16-megapixel ultra-wide angle camera that can also take macros. For selfies, this phone has a 32-megapixel selfie camera in the hole punch at the front. This camera module does not protrude as much as the one on the Edge 20.

The Edge 20 Pro is thicker than the Edge 20, (though not by much) and one reason for this could be its bigger 4,500mAh battery. Motorola has bundled a 30W TurboPower charger in the box. I had a Midnight Sky unit of the Edge 20 Pro which has a matte finish on the back panel. The Edge 20 Pro is IP52 rated which should keep it safe from splashes.

Motorola Edge 20 Pro is powered by the Qualcomm Snapdragon 870 SoC, and has 8GB of LPDDR5 RAM and 128GB of UFS 3.1 storage. While there is only one configuration of the Edge 20 Pro on sale in India, I do feel that there is room in the market for a 12GB RAM, 256GB storage variant.

You get Android 11 with Motorola's MyUX interface on top. Motorola promises to offer two years of software update on the Motorola Edge 20 Pro. My review unit was running the September Android security patch. The interface on the Edge 20 Pro feels just like stock Android with a few customisations. Apart from Facebook and some Google apps, I did not find any other bloat preinstalled on this device. The UI is very easy to navigate and will appeal to Android purists.

After spending some time with the Motorola Edge 20 Pro, I can say that it does pack in good hardware for the price. Its clean software is convenient to use, and overall, this smartphone could be a good alternative to the OnePlus 9R. Can the Motorola Edge 20 Pro beat the OnePlus 9R convincingly, in terms of actual usage, gaming performance, camera quality, and battery life? If you are curious, do stay tuned for the full review.