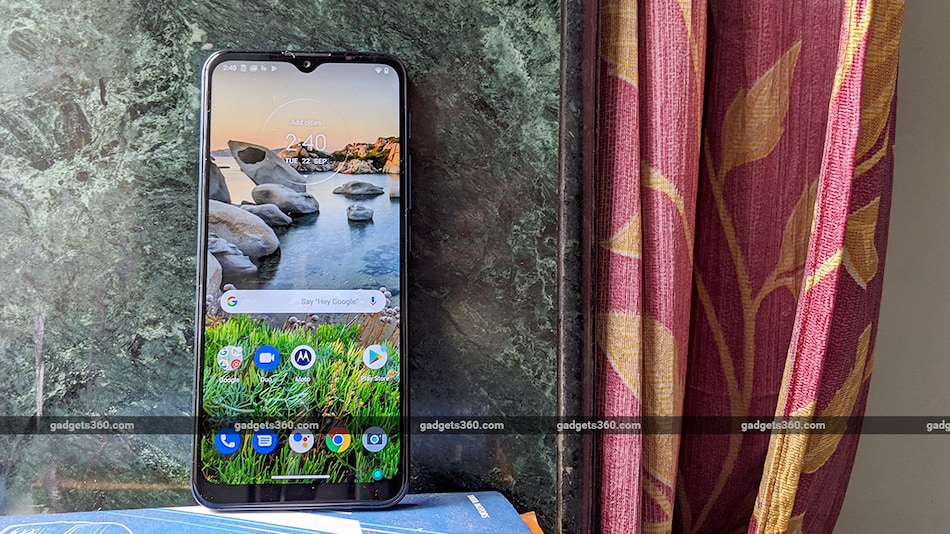 As smartphones have become more expensive over the past few months, the budget segment has become less appealing. Motorola is trying to fix this with the new Moto E7 Plus, the latest addition to its entry-level E series. The Moto E7 Plus is powered by the new Qualcomm Snapdragon 460 SoC and has a 5,000mAh battery. It also has a 48-megapixel primary camera, which isn't very common in the sub Rs. 10,000 segment. So should you pay attention to the Moto E7 Plus? I got my hands on this phone, and here are my first impressions.

When I first unboxed the Moto E7 Plus, its design instantly reminded me of the Moto G9 (Review), which I reviewed recently. The design language is quite familiar and a few design elements are common, such as the flat sides and the squircle camera module at the back. The flat sides curve as they meet the back panel making this phone comfortable to hold. Motorola has gone with a 6.5-inch display that has a dewdrop notch at the top. The bezels on the sides are acceptable but the bottom bezel is noticeably thicker.

All the buttons on the Moto E7 Plus are on the right side. The power button has a textured pattern which makes it easy to distinguish from the others. Right above it are the volume buttons and a dedicated Google Assistant button. While the power and the volume buttons are relatively easy to hit, reaching the Assistant button requires a quick shuffle in the hand. The SIM tray is the only thing on the left side of the smartphone. Motorola could have moved the Google Assistant key to this side, as seen on the Nokia 5.3 (Review).

The Moto E7 Plus has a gradient finish at the back

Pick the Moto E7 Plus up and you will notice that it is a bit heavy, tipping the scales at 200g. This is primarily due to the 5,000mAh battery that it packs. However, you don't get a very fast bundled charger; instead Motorola has tossed in a 10W unit which will take a relatively long time to charge this phone.

Motorola has gone for a dual camera setup on the Moto E7 Plus, consisting of a 48-megapixel primary camera with an f/1.7 aperture and a 2-megapixel depth sensor. Purely in terms of sensor count, it is lower than some of the competition, but the hardware does seem interesting. I am looking forward to testing this phone's camera capabilities when I perform a full review.

Below the cameras is the fingerprint scanner, and it is well positioned. I liked the Misty Blue gradient colour finish on my review device, and thought it looks quite premium. Motorola also offers a Twilight Orange colour option for the E7 Plus, if you want something different.

Powering the smartphone is the Qualcomm Snapdragon 460 SoC clocked at 1.8GHz. The Moto E7 Plus is available in a single configuration, with 4GB of RAM and 64GB of storage. It runs Motorola's MyUX on top of Android 10. There are very few customisations such as Moto Actions, but I found that the Moto E7 Plus is missing a few of the common ones. I only found Facebook to be preinstalled on this device, along with the usual Google apps.

Motorola has priced the E7 Plus at Rs. 9,499 in India, which put it up against the Redmi 9 Prime (Review) and the Realme C15. So should you pick the Motorola E7 Plus over the competition? Stay tuned to Gadgets360 for the full review in which we will be able to answer that question.