Moto E: Hands on With the New 'Moto' in Town 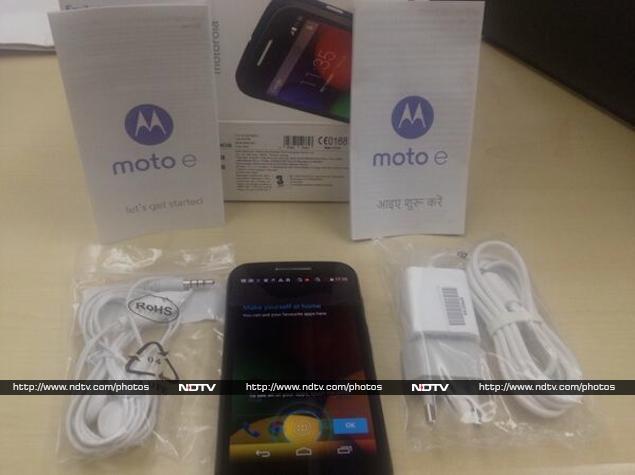 Few handsets have seen the kind of speculation that preceded the launch of the Moto E.

Motorola officially outed its next big thing at a small price - the Moto E - at launch events in Delhi and London on Tuesday. Instead of an upscale announcement that we usually see with other handset makers, the Moto E launch more laid back, with the company talking about the reception that Moto G and Moto X received.

Hot on the heels of the Moto G and Moto X, the Moto E has been priced smartly to take on the dominant players such as Micromax, Lava, Samsung and Xolo in the sub-Rs. 10,000 category. Motorola has unveiled the Moto E in India carrying a price tag of Rs. 6,999 and it is now available in India exclusively via online retailer Flipkart, just like the other two Motos.

It's worth noting that HTC also made waves with the affordable HTC Desire 210 Dual SIM, while Sony and Samsung have populars offering in the sub-Rs. 10,000 segment, with the Sony Xperia E1 Dual and Samsung Galaxy S Duos 2.

While hardware might not Moto E's strongest aspect on paper, the company hopes the pricing and the software features will be its key selling points in a market like India.

In addition, Flipkart, has introduced launch day offers on Moto E, similar to what it did with the Moto G and Moto X. Consumers willing to buy the Moto E on Wednesday can get a 50 percent discount on the purchase of covers and 8GB Transcend microSD card. Flipkart is also offering free ebooks worth Rs 1,000 on the opening day.

Build, design and display
Confirming many previous rumours, Motorola decided to stick to its tried and tested formula when it came to Moto E's appearance. The Moto E looks strikingly similar to the Moto G at first glance, the back panel in particular. The Moto E's rear is curved and is made of a soft-touch polycarbonate, and which is comfortable to hold. The front panel of Moto E however has differences when compared to the Moto G, which now sports two speaker grilles on top and bottom of the front panel with a chrome tone. 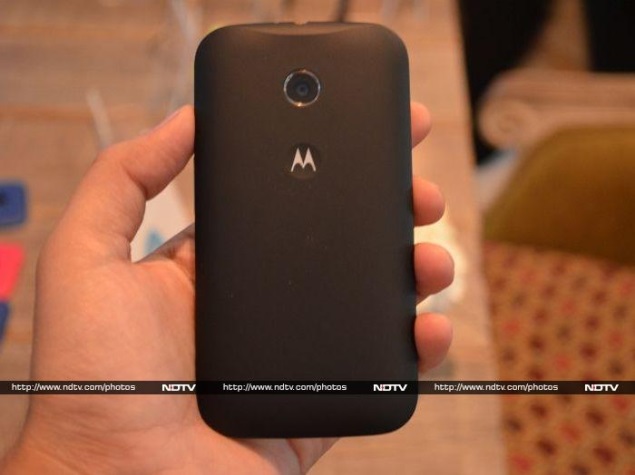 The Moto E with dimensions 124.8x64.8x12.3mm and weight 142 grams is thicker and heavier than the Moto G which comes with 129.9x65.9x11.6mm dimensions and weighs 140 grams. However, for an average buyer in this price segment, thickness and weight of a smartphone are not the biggest concerns.

The front panel features a black strip of glass around the screen that visually differentiates the plastic front and rear panels, very similar to the Moto G and Moto X. The power and volume rocker buttons are placed on the right side of the Moto E, while the 3.5mm audio jack is on the top and the Micro-USB port is on the bottom. Looking at the Moto E, it seems Motorola wants to align the industrial design of its products.

The Moto E's back houses a 5-megapixel camera without any flash, while the Motorola logo is embossed just below the camera.

The Moto E, like its predecessor, features switchable colourful back panels; although the battery is non-removable. Peel off the rear cover and you get access to the two SIM slots, which accept Micro-SIMs. Thankfully - and this addresses perhaps the biggest complaint with the Moto G - a microSD card slot is also present. 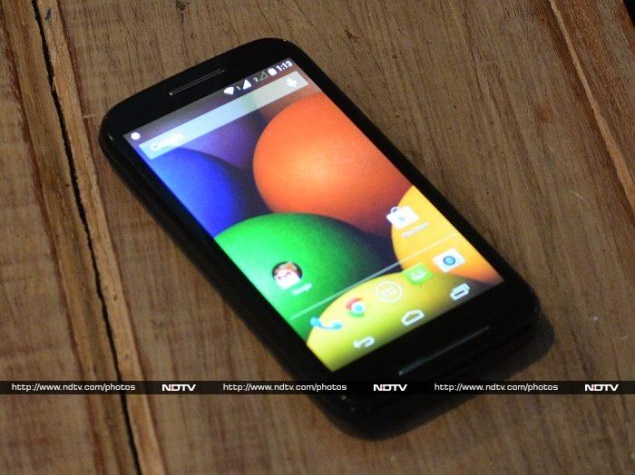 The Moto E comes with 4.3-inch display with a qHD (540x960 pixels) resolution, and offers 256ppi pixel density. Motorola has again used Corning Gorilla Glass 3 on the new Moto E, which is also found on the Moto G to protect it from scratches. The company used nano-coating on the Moto G that acted as light water repellent, while this one feature a water-resistant splash guard, Motorola claims.

Specifications, software and performance
The Moto E is powered by a 1.2GHz dual-core Qualcomm Snapdragon 200 processor along with Adreno 302 GPU and 1GB of RAM. It comes with 4GB built-in storage (2.1GB user-accessible), while also supports expandable storage up to 32GB via microSD card.

In our brief time spent with the phone, we found that navigating across the menu and opening and switching apps was quite smooth. Thanks to the 1GB of RAM, the phone appeared to handle most of the multitasking with ease. Performance wise, the Moto E fared well in our limited testing.

The Moto E runs Android 4.4 KitKat out-of-the-box and the company guarantees at least one major update for the handset in future. The latest Android software of the Moto E is another feature that gives the handset a clear advantage in the affordable smartphone segment. The Moto E is now the first handset to reach Indian market with Android 4.4 KitKat out-of-the-box in the sub-Rs. 10,000 segment.

The smartphone comes with a number of bells and whistles in terms of software. Motorola has preloaded apps such as Motorola Migrate, which helps in moving the contents of an old Android phone to your new Moto E and Motorola Assist, which allows users to silence the device while sleeping or driving. 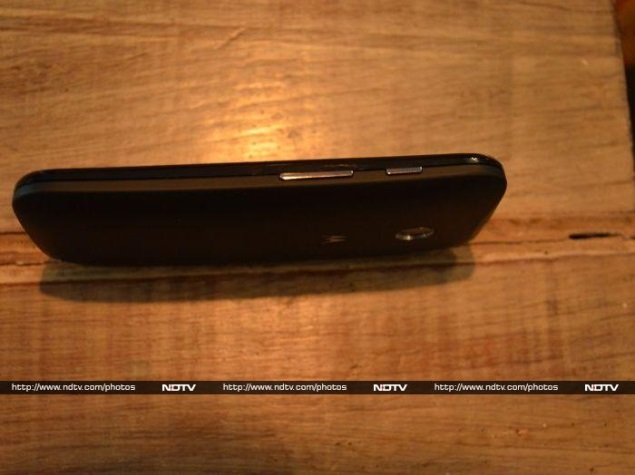 The company also introduced its new Motorola Alert app, which is now also available for download via Google Play. The app alerts people close to you, when needed. User's need to switch on the alert app on the phone and it starts sending periodic notifications with location to the people you designate. For example you can designate it to let your family know when you reach or leave your school or office.

Camera
The Moto E sports a 5-megapixel rear camera and is capable of capturing FVWGA (480x854 pixels resolution) video. The camera interface of Moto E is similar to the one seen on Moto G. Unfortunately, there is no front-facing camera or rear flash. While for some the absence of front camera won't be a problem, but for selfie-lovers, it might be a nightmare!

In our limited camera testing we noticed that images clicked in well-lit conditions had vibrant colours but a bit of noise around the edges - we will have to put the Moto E camera through the paces during our detailed review to find out more about this shooter.

Final words
It would be naive to say that the Moto E is perfect. There are concerns like the absence of front-facing camera and no flash. The performance of the rear camera needs to be tested in detail and while 'only' a dual-core processor might disappoint those obsessed with specs, Motorola will point to 1GB RAM at a price that usually sees only smartphones with 512MB RAM. 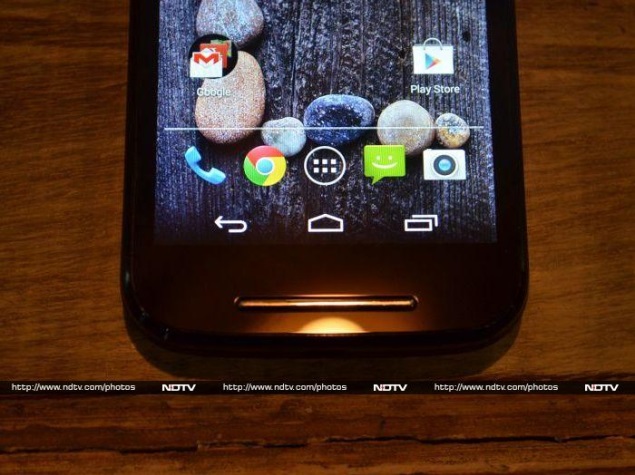 What makes the Moto E special is the fact that it is the only smartphone in the sub-Rs. 10,000 segment to run Android 4.4 out-of-the-box. Overall, the Moto E appears a decent package with its latest Android offering and dual-SIM functionality.

You can expect more detailed observations and testing when we review the Moto E.