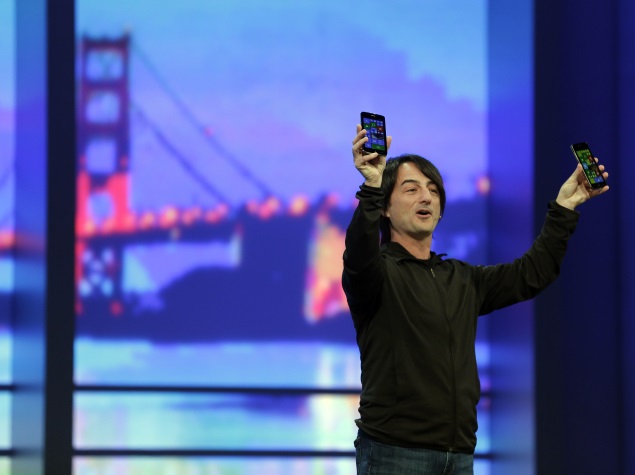 Microsoft's new Windows system for smartphones addresses many of the shortcomings in previous versions.

Before, voice search lacked the natural language interactions of Apple's Siri and Google Now. The updated Windows Phone system has Cortana, which combines Siri's personality with Google Now's knack for anticipating what you need before you even ask.

Meanwhile, Windows Phone's lack of a central hub for checking notifications from Facebook and other services has been addressed with a new Action Center.

Beyond that, the new Windows Phone 8.1 has tools to simplify connecting to Wi-Fi hotspots, save battery life and block non-emergency calls overnight.

The new system still doesn't address one of my major frustrations: There aren't as many apps for Windows smartphones compared with iPhones and Android phones. The Windows store is getting better and has many popular apps such as Facebook and Netflix. But now and then, you'll encounter something that only your iPhone and Android friends have. That includes apps for my bank and JetBlue.

If you already have a Windows phone or are thinking of getting one, the new features should please you.

I reviewed Cortana separately on Monday and found plenty to like, even though it's still in a "beta" test mode and has kinks to work out. You can read the review here.

Action Center
You get notifications from various apps by pulling the Action Center down from the top of the screen like a window shade. It's similar to what iPhones and Android phones offer. 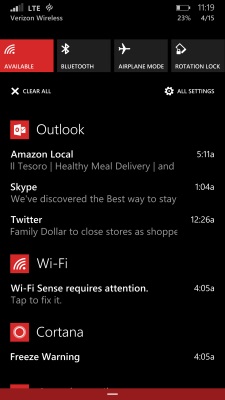 The Action Center also has four buttons at the top for frequently used settings and tools, such as airplane mode, similar to Apple's Control Center. But Windows lets you choose the four options you need most, while the iPhone picks for you. What Windows doesn't offer, though, is quick access to a flashlight app, as the iPhone does.

Quiet hours
You can ask the phone to block calls, texts and notifications during certain hours, or turn the feature on when you're at a movie or concert. Unlike merely shutting down your phone, though, you can set exceptions - such as calls from family members or emergencies, as defined by someone trying again within three minutes. The iPhone has a similar feature. Android doesn't, though Samsung includes one in its phones.

Wi-Fi hotspots
Windows Phone surpasses both iOS and Android in letting you automatically connect to known Wi-Fi hotspots. You can have it accept hotspots' terms of service automatically, so you aren't interrupted with prompts while trying to get to the senseless cat video. I haven't gotten this to work yet, though. It'll take time and more users for Microsoft to build a database of known hotspots.

This feature, called Wi-Fi Sense, also lets you share your home Wi-Fi connection with friends without having to give them your password. When they visit, their phones will connect to your home router automatically as long as they are on your contact list. Unfortunately, it doesn't work if your friend has an iPhone or Android phone, or even a Windows laptop or tablet.

Conserving power
A battery saver tool will monitor which apps use the most power and prevent some of them from running in the background when your charge is low. Sony, Samsung and other phone makers are starting to add such tools, but there's nothing universal for Android or iPhones. 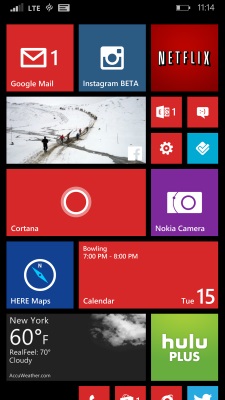 Keyboard swipes
Instead of tapping on keys one by one to type, you can slide from key to key, without lifting your finger between characters. Many Android phones already have this. I'm still a tapper myself, but some people find sliding to be faster.

One Windows
There are essentially two classes of Windows: Windows Phone for smartphones and the regular Windows for tablets, laptops and desktops.

The two are starting to merge, but true unification hasn't arrived yet. For instance, you can customize the phone's People app so it tracks news feeds from your favorite social networks, but when you go to People on a tablet, you need to set that up again, even though Microsoft's OneDrive storage service promises to sync all your devices.

In that sense, Windows Phone remains a work in progress. It incorporates plenty of great ideas, which I'm sure will work seamlessly one day. Likewise, as usage grows beyond the 3 percent worldwide market share it had last year, more apps will follow.

There's no need to abandon your iPhone or Android phone yet, but Windows Phone is worth watching as it develops.