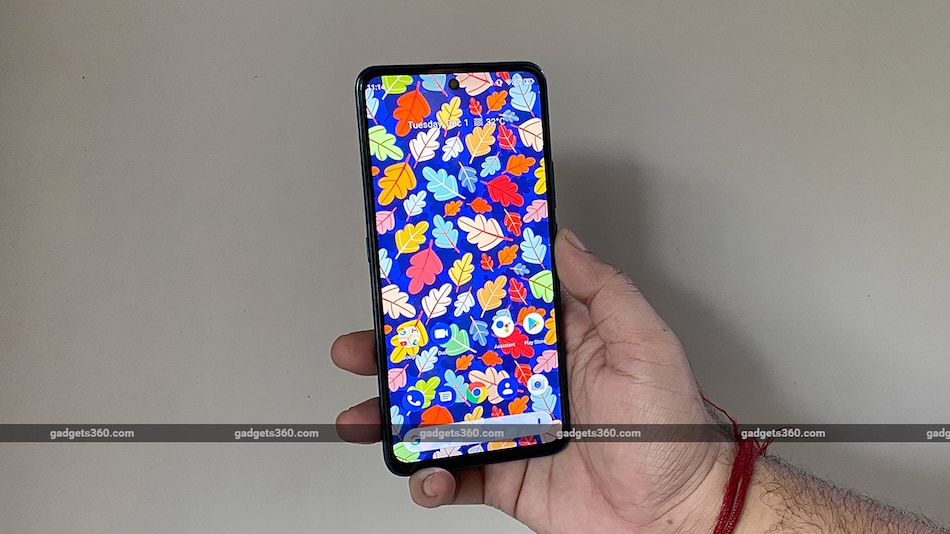 Micromax is making a comeback in the Indian market with its new In series of smartphones. The Indian smartphone brand has launched the In Note 1 and the In 1b to cater to two different price-sensitive segments. Micromax has priced the Note 1 starting at Rs. 10,999, and it offers some interesting specifications on paper. Will this translate to a good experience in real life? I test the Micromax In Note 1 to find out.

It looks as though Micromax has been studying the current market, and the In Note 1 is designed to fit the mould of what is currently popular. The first thing that surprised me was the big 6.67 inch display, which has a full-HD+ resolution. While this size and resolution used to be the norm at around the Rs. 10,000 price point, things changed after the GST hike earlier this year and most companies now only offer HD+ panels. This is one area in which Micromax offers better specs. The big display has a hole-punch front camera at the top-centre. There is no information about the type of glass used for the display, so its scratch resistance is unknown.

I found the look of the Micromax In Note 1 to be acceptable given the price, and I would say the same about its build quality. Micromax has opted for a plastic frame and body. There are two colour options for the In Note 1, White, and the Green one that I have with me. There is an “X” pattern on the back that shines when light strikes it. While the glossy finish on the back makes it striking, it also picks up fingerprints very easily. I found myself wiping it too often to get back that glossy look.

The Micromax In Note 1 has a glossy back

The button placement on the Micromax In Note 1 is quite good, with the power and volume buttons within reach while holding the device. There is a dedicated Google Assistant button on the left as well. All of them have clicky feedback but the Google Assistant button is a bit shallow, so you might second-guess presses as I did. Micromax has put the SIM tray on the left, and it has two Nano-SIM slots plus a dedicated microSD card slot for storage expansion.

I found the fingerprint scanner to be well-positioned and my finger rested naturally on it while holding the device. There is a quad-camera setup at the back and the module protrudes slightly. At the bottom, you'll find a USB Type-C port, a loudspeaker, and the primary microphone.

Micromax In Note 1 specifications and software

One look at the spec sheet is enough to see that the Micromax In Note 1 boasts of some good specs. The big display sports a full-HD+ resolution. It has decent viewing angles and is legible outdoors. Yes, it has a camera hole at the top-centre that can get a little distracting. You also get the option to tweak the colour output of the display.

Micromax has picked the MediaTek Helio G85 processor to power the In Note 1, and there's also 4GB of RAM. There are two storage variants, 64GB and 128GB, priced at Rs. 10,999 and Rs. 12,499 respectively. I had the latter for this review. Connectivity options on the Micromax In Note 1 include Bluetooth 5, dual-band Wi-Fi, and 4G VoLTE. The phone packs a 5,000mAh battery, and Micromax ships an 18W charger in the box.

Micromax ships near-stock Android 10 on the In Note 1

In terms of software, Micromax has gone with near-stock Android 10 on the In Note 1, with only slight customisations. There are a few features and gestures added to the UI which aren't a part of AOSP. The implementation needs a bit of polish in places, though. When I first started using the device, the UI animations felt a little choppy and multi-touch was restricted to three fingers only which was an issue while gaming, This is a bug that Micromax has acknowledged in a tweet.

I received a software update on my review unit mid-testing, which fixed the multi-touch issue and also updated the phone to the November Android security patch, which is the latest available. However, the update included a note stating that it had been targeted to 87 devices sent to bloggers for testing, so I'm not sure if the experience I had will be exactly the same as what retail units will offer. Micromax did acknowledge rolling out the update to reviewers only, and has said it will be rolling out to other devices soon.

The Micromax In Note 1 has a hole-punch display

What I like about the In Note 1 is that it does not come with any bloatware. I don't like preinstalled apps on a new smartphone, and I appreciate the step Micromax has taken. There were also no spammy notifications. The In Note 1 felt a little choppy before the update but has shown some improvements after that.

Micromax offers swipe-based navigation by default, and surprisingly these work along the entire length of the screen. Most UIs restrict these to 3/4ths of the screen edges to prevent them from interfering with in-app gestures such as opening menus. The Micromax In Note 1 does not support Widevine L1 DRM which means you won't be able to stream content at the screen's full resolution. Weirdly, I also couldn't find the Netflix app in the Google Play Store on the In Note 1.

Micromax promises to give users two years of updates, but it isn't known whether that includes major Android version upgrades as well. The In Note 1 isn't officially part of Google's Android One programme either, which promises two years of software updates.

The Micromax In Note 1 offers decent performance but there is some room for improvement. It can load apps quickly, and multitasking isn't an issue. I found the fingerprint scanner to be quick, but it wasn't consistent and needed a second attempt occasionally. Face recognition on the other hand was consistent in good lighting. The display has good viewing angles and the speaker is loud.

I ran benchmarks on the Micromax In Note 1 to see where it stands compared to some of the other smartphones in the market. In AnTuTu, the In Note 1 managed 197,960 points, and it also scored 8,073 points in PCMark Work 2.0. It managed 37fps and 13fps in GFXBench's T-Rex and Manhattan 3.1 tests respectively. These scores are in the same range as those of the Xiaomi Redmi Note 9 [Review].

I played Call of Duty Mobile on the In Note 1, and it ran at Low graphics quality at the Medium frame rate. I bumped the graphics preset up to Medium ( the highest available option) and could play the game without any noticeable drop in performance. The smartphone did get warm to the touch after playing for 24 minutes. It also registered an 8 percent battery level drop which is slightly on the higher side.

In our HD video loop test, the Micromax In Note 1 went on for 14 hours, 30 minutes, which is somewhat below average. With my usage, the In Note 1 lasted me for about a day and a half without any issues. Micromax does supply a fast 18W charger that is fairly quick to charge the phone. It got the In Note 1 to 35 percent in 30 minutes and 62 percent in an hour.

Sticking to current trends, Micromax offers four rear cameras on the In Note 1. It has a 48-megapixel primary camera, a 5-megapixel ultra-wide-angle camera, a 2-megapixel depth sensor, and a 2-megapixel macro camera. The camera app looks very basic, but it does have a dedicated Night mode as well as a Pro mode that lets you take full control. There is an HDR shooting mode as well, which is a bit odd since most phones enable HDR automatically in bright scenes. The camera app defaults to 48-megapixel shots which is a bit odd. I reset the camera app to check if the resolution switches to 12-megapixel but that wasn't the case.

The four cameras on the In Note 1 aren't very impressive

Photos taken in daylight appeared muted, and the sensor seems to have trouble capturing dynamic range. Shooting outdoors during the day resulted in a loss of details in the shadows. The overall image quality looks average and switching to 12-megapixel mode did not show any noticeable difference in the output.

Shots taken with the wide-angle camera were below-average in quality as well. While you do get a wider field of view, the quality is significantly lower. Colour reproduction wasn't accurate either.

Close-up shots had decent details and the Micromax In Note 1 can simulate depth of field. You can take portrait shots by tapping the aperture icon in the quick toggles bar. This lets you set the level of blur before taking a shot. The In Note 1 managed decent edge detection in the output. The macro camera on the In Note 1 is restricted to 2-megapixels and lets you get close to a subject. It needs good light to be able to manage a nice shot.

In low light, image quality takes a dip. The In Note 1 seemed to keep noise under control when checking results on the phone's screen, but the output appeared slightly grainy on zooming in. The ultra-wide-angle camera is not capable of pulling in as much light, so shots appear washed-out. In Night mode, the phone still shoots at 48 megapixels if you haven't fiddled with the settings. Photos taken with Night mode had slightly better detail, and objects in the shadows were more recognisable.

For selfies, the Micromax In Note 1 has a 16-megapixel camera. In daylight, it managed good photos for the price, and the portrait mode did blur out the background quite well. In low light, the In Note 1 used the screen flash to help capture selfies, and these also turned out well.

Video recording tops out at 1080p for both the primary as well as the selfie camera. There is no stabilisation, and recorded footage had shakes.

Micromax is making a comeback in India with the new In series. It boasts of good specifications on paper but the company is also banking on current sentiments in order to succeed in such a competitive environment. The In Note 1 got a software update during the review process to fix a few bugs, but it needs a few more tweaks to match the level of polish that other brands offer.

The powerful hardware does translate into good performance, and casual users should have no issues with it. I also like the stock Android approach that Micromax has taken for the In Note 1. However, we'll need to see whether the company will ship Android updates.

The Micromax In Note 1 definitely needs improvements for its cameras. While the specifications look good on paper, this phone cannot take on the competition in its segment in terms of photo quality. You can take a bet on the In Note 1 if you're willing to wait for potential software updates. If not, you could take a look at the Moto G9 [Review] which takes significantly better photos and also offers a clean stock Android experience.

Samsung Galaxy Z Fold 3 Tipped to Be Slimmer and Lighter Than Galaxy Z Fold 2, May Cost the Same
Philips Moves Delhi High Court to Stop Xiaomi From Selling Phones That Infringe Its Patents