LeEco, the Chinese Internet conglomerate better known by its former name Letv, has finally launched its first products for the Indian market. The Le Max and Le 1s have been unveiled and will be available in India using the infamous flash sale model, in which interested buyers need to sign up in advance for a chance to buy one of a limited number of units that will be available.

The company recently garnered a lot of interest with its CES announcement of the Le Max Pro, first smartphone to sport the new Qualcomm Snapdragon 820 processor. Letv recently rebranded itself to LeEco (short for Le Ecosystem) ahead of the Indian launch, and offers live-streaming, e-commerce and cloud services and sells smartphones, TV set-top boxes and smart TVs, among many other things, in its home market China. At the launch event in New Delhi, LeEco had members of its SuperFans community in attendance. We have seen many other brands including Asus, Meizu, and Xiaomi following the same strategy at their respective launches.

The Le Max (seen below) smartphone was initially launched in China back in April last year. The Le 1s, on the other hand, was unveiled in October. India will be the first country outside China where the Le Max and Le 1s will be going on sale. 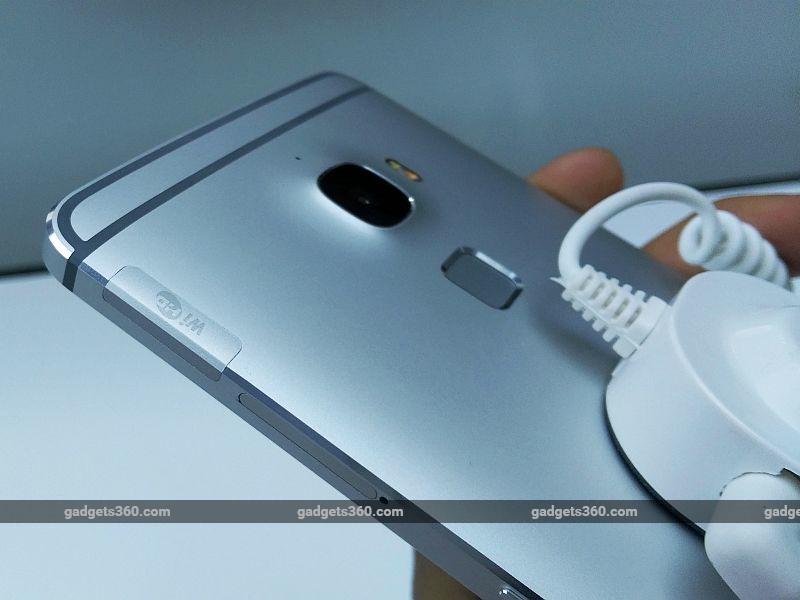 The Le Max and Le 1s smartphones both feature all-metal unibody designs, fingerprint scanners, nearly bezel-less displays, and USB Type-C ports - more than enough to keep feature-obsessed consumers happy. But will these features be enough for a new smartphone brand to establish itself and make a grand entry into the Indian market - only time can tell. We spent some time with both devices at the launch event and here are our first impressions.

The first thing we noticed when we held the new Le Max and Le 1s smartphones was their all-metal unibodies, which definitely offer sturdiness. The near-bezel-less displays, according to the company, offer 80.3 percent screen-to-body ratio which when compared to the iPhone 6s which offers 68.2 percent. The company at the launch claimed that the Le Max at 0.8mm has the world's narrowest display borders, and also touted the device's floating glass design. At several times during the India launch event, LeEco compared its new Le Max and Le 1s to high-end smartphones including the iPhone 6s and iPhone 6s Plus.

The Le Max is comfortable to hold but is barely usable with just one hand, thanks to its giant 6.33-inch screen. The Le 1s, on the other hand, fits nicely into one hand despite its 5.5-inch screen. The company showed several slides during the launch event comparing the Le 1s with the iPhone 6s Plus, which also has a 5.5-inch display. The rear of the Le Max (seen above) is all metal but we were reminded of the iPhone 6s and iPhone 6s Plus because of the antenna bands on the top and bottom. The rear panel houses the primary camera which bulges out slightly, though this has been seen on many high-end phones before. The fingerprint scanner sits right below the rear camera and was easy to access.

The right side of the Le Max houses the power button, which is located in the middle where the user can reach it while using just one hand. The SIM slot is also located on the right. The left side has the volume rocker and mute button. The speakers and USB Type-C port are on the bottom, while the 3.5mm headphone jack sits on top.

The Le 1s, on the other hand, also has an all-metal body but doesn't incorporate the bold antenna bands on the rear. Both the power as well as volume rocker buttons are on the right side. The left is bare except for the SIM slot. Similar to the Le Max, the Le 1s' speakers are on the bottom. The primamy camera and fingerprint scanner are on the rear.

One of the highlights of the fingerprint scanner on the Le 1s is that it's claimed to be the world's first with a mirrored surface. LeEco claimed that the scanner on the Le 1s (seen below) smartphone is scratchproof and has an accuracy of 99.3 percent, and an unlock speed of 0.15 seconds. At the launch we tried the fingerprint scanners on both models and found that they worked well, recognising our fingerprints quickly. 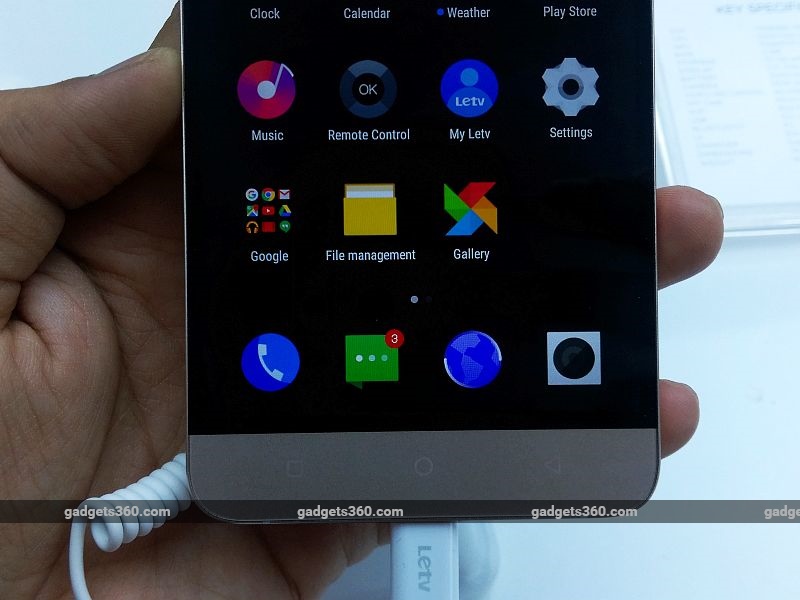 Both the Le Max and Le 1s fronts are dominated by their screens covering most of the front. Both models feature capacitive navigation buttons. The Le Max phablet features a 6.33-inch QHD (1440x2560-pixel) display with a density of 464ppi and 0.8mm bezel. The Le 1s packs a 5.5-inch full-HD (1080x1920-pixel) display.

In our limited time with both phones, the Le Max and Le 1s seemed to handle multitasking and Internet browsing pretty easily without any lag. We will reserve our verdict of the performance of the Le Max and Le 1s till we get the chance to put them through our detailed review process.

LeEco, much like its Chinese competitors, uses heavy software customisations on the Le Max and Le 1s smartphones. They both run Android 5.0 Lollipop with a skin called eUI, which ditches the app drawer and shows all icons on the home screens. Unfortunately, the Le Max and Le 1s don't offer the user many options. The handsets we played with had Google's suite of apps preloaded but didn't seem to have many third-party apps. We will have to wait for our review units to check whether the ones sold in India will be different. 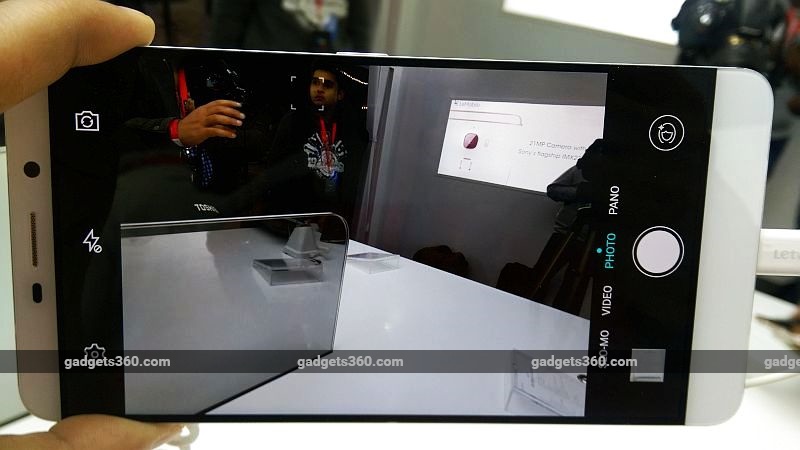 Coming to the camera department, the Le Max (seen above) sports a 21-megapixel rear camera with optical image stabilisation (OIS), Sony IMX230 sensor, phase-detection autofocus (PDAF), dual-LED flash, and an f/2.0 aperture lens, in addition to a 4-megapixel front-facing camera with an f/2.0 aperture. In our quick camera tests, we found images taken with the Le Max in normal indoor lighting to be vibrant with accurate colours showing up on screen, and a few low-light shots also seemed good. The front camera was able to take decent selfies but the quality might be an issue in low light.

The Le 1s packs a 13-megapixel rear camera with LED flash and also supports phase-detection autofocus (PDAF). There is a 5-megapixel front-facing camera. The Le 1s also delivered crisp shots in normal light conditions and even the low-light performance of the rear camera was impressive with a good amount of detail coming through in the shots. The front camera however took average shots in low light.

We will have to wait till we can perform a full review to see whether the cameras on the Le Max and Le 1s are better than those of their competitors.

Final Thoughts
LeEco has made sure to tick all the right boxes, and as it did in China last year, has even revealed the BOM (bill of materials) for both of its smartphones - which seemed a little gimmicky. BOM cost is a listing of the prices all the raw materials, sub-assemblies and components needed to manufacture a product, and doesn't account for research and development costs, staff, utilities, marketing, shipping, etc. LeEco claimed at the launch that it will be making the narrowest profit margins in the industry on both of its smartphones, in order to sell them at the lowest possible prices.

The company also revealed plans for after-sales service of the new Le phones. Atul Jain, COO of Smart Electronics Business, LeEco India, told us on the sidelines of the event that LeEco will be focusing on this and will have multi-lingual 24-hour call centres for customer enquiries. The company plans to set up 555 service centres across India at the beginning, and will also offer a pick-and-drop service for devices.

LeEco also announced plans to offer content from its partners YuppTV and Eros International. The company, after all, is a content company back home and has been selling phones there with features such as Live TV.

The Le Max has been launched in Titanium Silver with 64GB of storage at Rs. 32,999. There is also a Shimmer Gold variant with 128GB of storage, which has been priced at Rs. 36,999. At these price points, the Le Max will be competing against a lot of high-end smartphones including the iPhone 6 (which is now retailing at around Rs. 35,000 for the 16GB model), Nexus 5X, and Samsung Galaxy S6. The Chinese company also announced a Pink edition of the Le Max with a sapphire display and 128GB of storage, of which only 1,000 units will be available, priced at Rs. 69,999.

The Le 1s (seen above) on the other hand comes with 32GB of storage and has been priced at Rs. 10,999. At this price point, the Le 1s will be going up against the recently unveiled Lenovo Vibe K4 Note, priced at Rs. 12,499. Some of the other possible competitors to the Le 1s are the Xiaomi Mi 4i, Meizu metal, and Xiaomi Redmi Note 2.