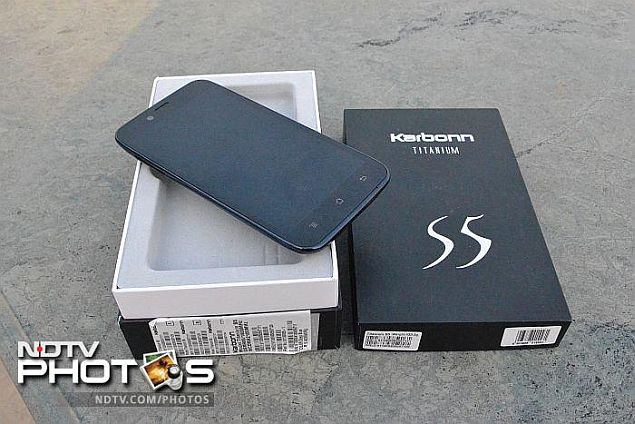 The Karbonn S5 Titanium is the successor to the S1 Titanium featuring an upgraded 5-inch qHD display and an 8-megapixel rear camera. The phone was launched for Rs. 11,990, around Rs.1,000 more than the S1 Titanium's launch price. The S1 Titanium is now available online for Rs. 9,990. Is it worth spending Rs. 2,000 more to buy the S5 Titanium? We try to find out how the phone fares in all departments in our review.

The Karbonn S5 Titanium looks a little different from its predecessor and is thinner. It also looks more refined compared to the S1 Titanium. However, it features the same rectangular slab form factor with rounded corners. The phone comes in White and Deep Blue colour variants and we got a Deep Blue phone as our review unit.

The front of the phone features the 5-inch qHD display, three capacitive touch buttons for navigation, and the front camera lens, in addition to the proximity sensor and the earpiece. The bezel is not that wide on the sides and doesn't take up a major part of the front unlike the S1 Titanium. 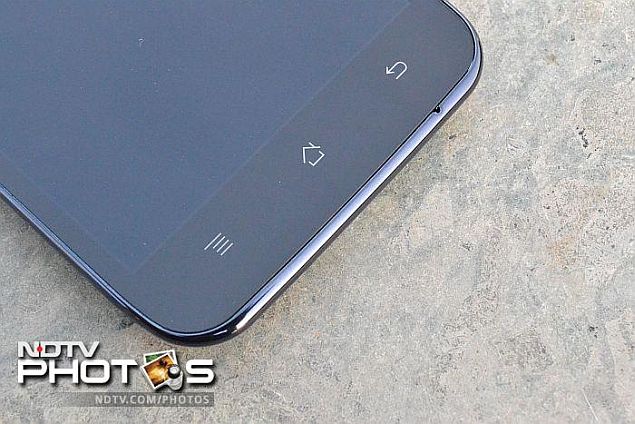 The Power/Screen lock is located at the right side of the phone, while the volume rocker key is located on the left side. The 3.5mm headset jack and the Micro-USB port sit at the top.

While Karbonn has mostly taken care of our gripes with the S1 Titanium's design in the S5 Titanium, the back of the phone is still made of plastic and is extremely glossy. You could use it as a mirror but it's a fingerprint magnet and it'll be full of smudges as soon as you start using the phone. The 8-megapixel rear camera lens is located towards the top along with a flash. There's some Karbonn branding towards the bottom. 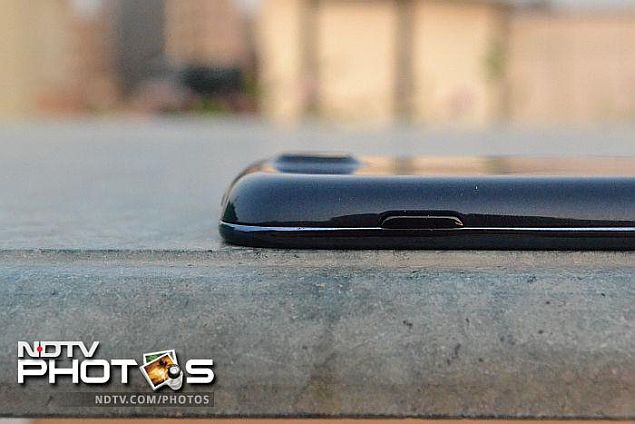 The S5 Titanium comes with a 5-inch qHD IPS screen that has a resolution of 540x960 pixels and pixel density of 221ppi, which is decent, and graphics and text appear sharp, although a 720p screen could have taken it to the next level. The viewing angles looked good. However, it's really difficult to read or take pictures in sunlight, as the screen is extremely reflective. Videos and pictures looked good but colours appeared to be a little saturated just like the S1 Titanium's screen.

The Karbonn S5 Titanium runs Android 4.1.2 Jelly Bean. The interface is the same as that of the S1 Titanium and you can read about it in detail in our S1 Titanium review. 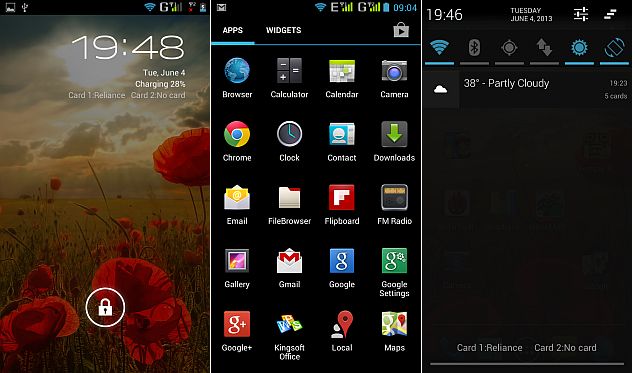 We like the fact that Karbonn has removed the redundant Search button and switched to the standard three button navigation.

The phone features an 8-megapixel autofocus shooter that takes good quality images in daylight. However, at times we observed that they were a little over-exposed. Pictures taken indoors under artificial light also came out well but suffered the same issue. 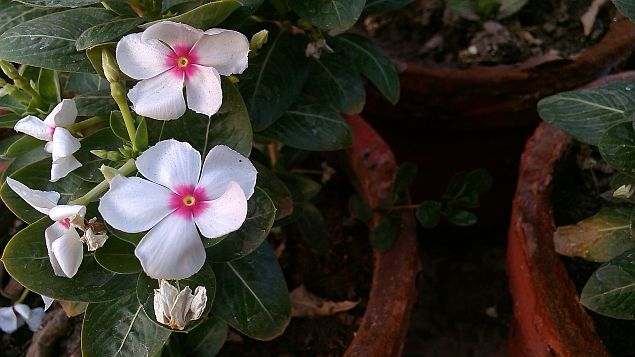 The camera app is a little different from the stock Android camera app and unlike the S1 Titanium, doesn't feature the capability to simultaneously use the rear and the 2-megapixel front camera. The camera app features settings for white balance, exposure, aspect ratio, face-detection, red eye reduction among others. It also offers a Panorama mode but leaves out the HDR mode which was present in the S1 Titanium's camera app. There's a speed shot mode as well as the normal mode takes time to click photos. 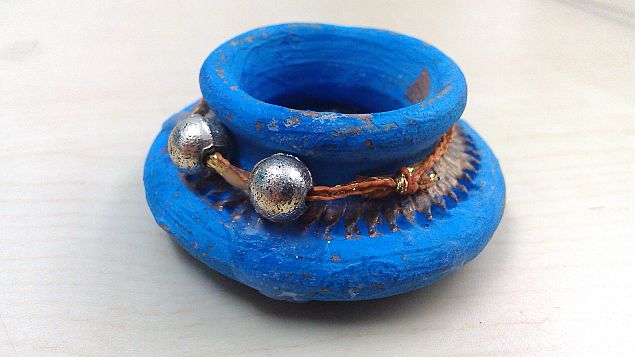 The phone is also capable of shooting 720p video and we found the recording quality to be decent.

The front camera also takes decent photos and can be used for video chats as well as for self clicks.

The Karbonn S5 Titanium is powered by a 1.2GHz Qualcomm Snapdragon S4 MSM8625 quad-core processor. It has 1GB RAM onboard, and Adreno 203 chip for processing graphics. There is 4GB of internal storage, which is expandable up to 32GB via a microSD card.

With Android 4.1 Jelly Bean, the overall experience of navigation through the interface was impressive, thanks to Project Butter and the phone's quad-core processor. We did not experience any lag while launching apps, playing games, scrolling web pages or switching between apps. It is safe to say that performance wise, the S5 Titanium trumps other dual-core processor powered phones in this price range. 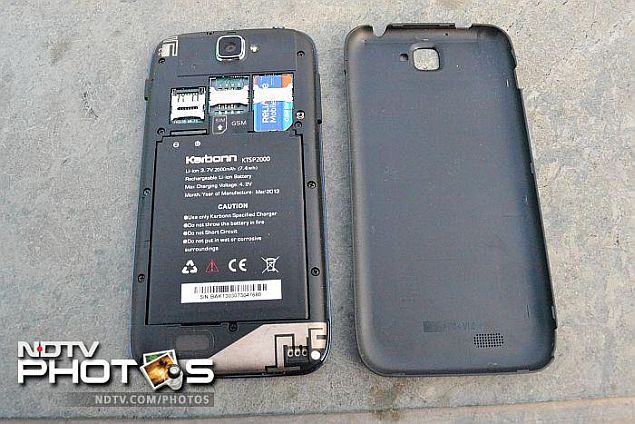 The phone also offers FM Radio unlike its predecessor, which gives you another reason to choose this phone over the S1 Titanium.

The phone comes with a 2000mAh battery, and based on our experience, it will last you a full day with medium to heavy usage, including 1-1.5 hours of phone calls, two e-mail accounts with push notifications, screen at maximum brightness, playing some music and video clips, Twitter notifications and WhatsApp chats. It's also worth pointing out that we had turned off Wi-Fi and auto-brightness, and the phone was hooked to a 3G network. Altering these settings might help in running the phone for a longer duration, depending on your usage pattern.

The Karbonn S5 Titanium is a worthy upgrade to the S1 Titanium, offering a better build, improved camera, albeit stripped of some features and a bigger screen. It also offers FM radio if you like tuning in to your favourite local radio station. We'd recommend buying the S5 Titanium over the S1 Titanium though it will cost you around Rs. 2,000 more at this point in time.

We also recommend you to take a look at the Zen Ultrafone 701HD that comes at the same price point and offers Android 4.2 and a 720p display along with a better build quality.

Other quad-core processor phones in the budget range include the Micromax Canvas HD and the Xolo Q800.