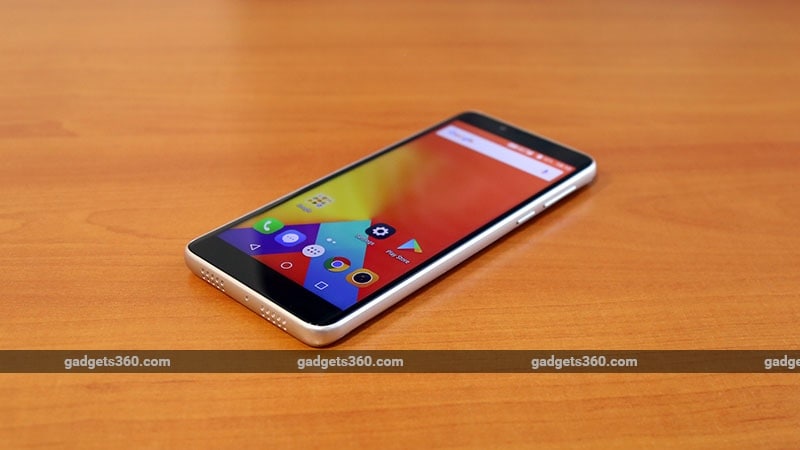 iVoomi entered the budget smartphone market in India less than a year ago. Looking at design trends shifting towards bezel-less smartphones, the brand has introduced a few new models with the 18:9 aspect ratio. This new display format is catching on and is slowly making its way to entry-level smartphones. The iVoomi i1 was launched recently alongside the iVoomi i1s and is priced quite aggressively at Rs 5,999. We already have phones including the InFocus Vision 3 (Review) and Micromax Canvas Infinity (Review) with similar screens in the same space, as well as many other strong competitors.

For its price, the iVoomi i1 gets an 18:9 display, a fingerprint scanner at the back, and also a dual camera setup. While this looks good on paper, does it translate into good real-world performance? We put the iVoomi i1 to the test.

The first thing to grab your attention is the 5.45-inch display with its 18:9 aspect ratio, which iVoomi calls Absolute View. It has thin borders on the sides and comparatively thicker ones on the top and the bottom. This means that the phone is narrow and tall, making it easier to hold. iVoomi has placed the power and volume buttons on the right but we found their positioning a little too high for our liking.

The iVoomi i1 has a removable back cover to give access to two Micro-SIM slots and a dedicated microSD card slot. We found that the cover isn’t very easy to remove and feels a little flimsy when it flexes. The 3000mAh battery is visible with the cover off, but it is not removable. The 3.5mm headphone jack and a Micro-USB port are on the top, while the speaker and microphone are at the bottom. Out of the two speaker grilles at the bottom, only one is functional while the other is a dummy.

There are dual cameras at the back, with an LED flash and a fingerprint scanner positioned below them. The camera bump juts out quite a bit and makes the phone rock when placed on a flat surface. There is a thin metal ring surrounding the cameras that should help keep the lenses from getting damaged. Overall, the phone feels rather plasticky, which is not uncommon at this price.

iVoomi i1 specifications and software

The 5.45-inch display on the iVoomi i1 sports a resolution of 640x1280 pixels. The resolution is lower than that of most other smartphones in this price range and so the screen isn’t very crisp. Powering the phone is a MediaTek MT6737 SoC which is quite common in entry-level smartphones. It is a quad-core processor clocked at 1.3GHz. The phone also has 2GB of RAM and 16GB of internal storage. Thanks to the dedicated microSD card slot, storage is expandable by upto 128GB.

The iVoomi i1 has a 13-megapixel primary camera and 2-megapixel secondary sensor on the rear. At the front, it has an 8-megapixel selfie shooter. In terms of connectivity, it has 4G and VoLTE support, single-band Wi-Fi, Bluetooth, and FM radio.

The smartphone runs on Android Nougat with very few customisations. iVoomi has added a few colourful icons in the Settings app, which give it a different look. DuraSpeed is a software feature that claims to boost performance by limiting background processes. Gesture controls are available, and mainly make use of the proximity sensor to let you scroll through photos and switch songs or radio channels in their respective apps by waving your hand over the phone.

Some other functions linked to the proximity sensor involve answering a phone call automatically by raising the phone to your ear, and switching it to mute by flipping it over. There's also a two-finger swipe gesture to switch wallpapers. To us, most of these features felt more gimmicky than genuinely useful, but your mileage may vary.

The UI has a floating dock called Quick Touch which contains shortcuts to some apps and a few settings toggles, and is completely customisable. You also get the option to change the order of the on-screen Android navigation buttons to your preference. iVoomi has preinstalled demo versions of a few games such as Temple Paradise Dash and Cupcake Dreamland. UC Browser, Xender, Flipkart, Google Duo, and iVoomi Care Centre come preloaded as well.

The iVoomi i1 sports decent hardware but it doesn’t deliver the smoothest performance. We found that the device would lag and stutter during normal use, but it was still manageable. Loading heavy apps and games took quite a long time, and the phone struggled to run them smoothly. With fast-paced games such as Shadow Fight 3, we experienced dropped frames during gaming. We also found that the loudspeaker can easily get blocked when using the phone in landscape mode.

The display has average viewing angles and isn’t as pixel-dense as some other smartphones at the same price level. We found that the phone would run most apps and games in fullscreen mode by default. While those updated for the 18:9 aspect ratio work fine, unoptimised apps run letterboxed. The fingerprint scanner is fairly accurate but there is a noticeable lag between registering a fingerprint and unlocking the phone.

The iVoomi i1 managed to score 29,094 in AnTuTu. In Geekbench 4, it managed 529 for the single-core test and 1522 in the multi-core test. The battery can go on for one day with light use and managed to clock 8 hours and 12 minutes in our HD video loop test. The supplied 5W charger isn’t very powerful, and it takes close to three hours to charge the device up fully.

iVoomi ships a very basic camera app with this phone. It has four modes: Panorama, Video, Photo, and Bokeh, and switching between them isn't very quick. Auto scene detection is available but it is slow to adapt. Photos taken with the iVoomi i1 are below average. The camera takes some time to lock focus. Landscape shots aren’t sharp and were barely usable. We also saw purple fringing when shooting against the light on a few occasions. Macros are comparatively better than landscape shots.

Low-light shots are quite grainy and the i1 fails to capture details. The Bokeh mode utilises secondary rear camera but the results weren’t great, and the background wasn't blurred very well. HDR mode is also a little slow to take shots and results in ghosting if you don't have a steady hand. Selfies taken in natural light are good enough to go on social networking sites. The primary camera could manage 720p video but the front camera only goes up to 480p footage. There is support for electronic image stabilisation in the camera app but it isn't very helpful.

Verdict
With the iVoomi i1, the entry-level segment gets one more smartphone with an 18:9 screen. Sadly, it isn’t the best example out there at the moment. Battery life is decent and the big display helps it stand out in terms of design, but overall performance isn’t great, the cameras are weak, and the fingerprint sensor is a little slow. If you can do without an 18:9 aspect ratio display, the Xiaomi Redmi 5A (Review) and 10.or D (Review) has better hardware to offer. There will be many more such models in the market soon, so if you really want a "bezel-less" phone, you could wait and see what else comes along.