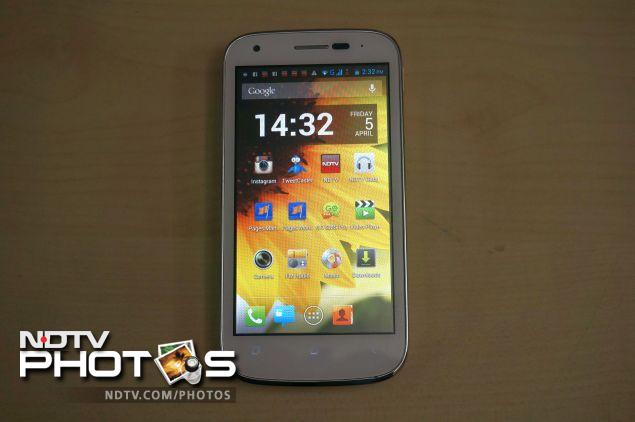 Build/ Design
Of lately, the Indian smartphone makers are paying a lot of attention to the design of the smartphone to ensure that their smartphones don't look flimsy or cheap. We had earlier marvelled at Xolo X1000 (Review | Pictures) for its alluring looks, and Intex Aqua Wonder too aspires to be in the same league. 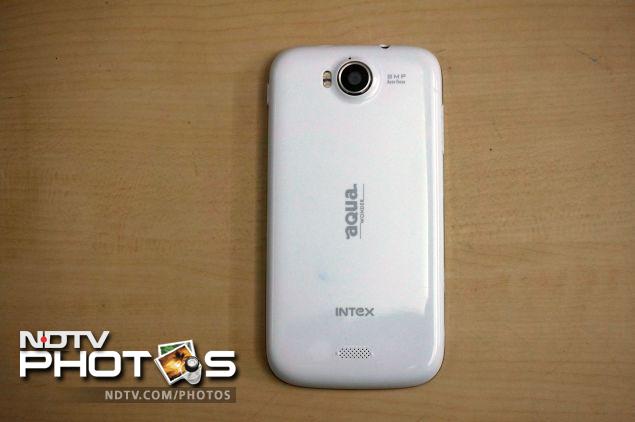 Intex Aqua Wonder looks appealing at first glance. It comes in black and white colour options. We were given a white unit for the review. It is rectangular in shaped with well rounded corners. The thin chrome lining at the edges adds to the overall design of the smartphone. The back looks a little too plain and shiny however, thankfully, it is not slippery.

The smartphone is made primarily of plastic, but does not look cheap. It comes with 4.5-inch screen that takes most of the screen and there are three familiar looking capacitive buttons for Menu, Home and Back.

Though the smartphone is attractive in terms of looks, one cannot overlook the fact that it looks very similar to the Samsung Galaxy S III. The only major difference is that the Galaxy S III is a bit broader than the Intex.

Intex Aqua Wonder weighs a mere 125 grams and is quite nice to handle and as it is only 8.9mm thick, it also slips easily in the pocket. The left panel houses the volume rocker and the power/ standby button is on the right. In our experience, the smartphone is fairly comfortable to use.

However, we are not very happy with the overall finishing of the smartphone. The most glaring example of this is that we could see the notification LED light even through the USB / charging port.

Another turn off on the design front is protruding camera lens at the back panel. In a bid to keep smartphone slim, the smartphone makers seem to ignore this aspect of the design, which we personally do not approve of. 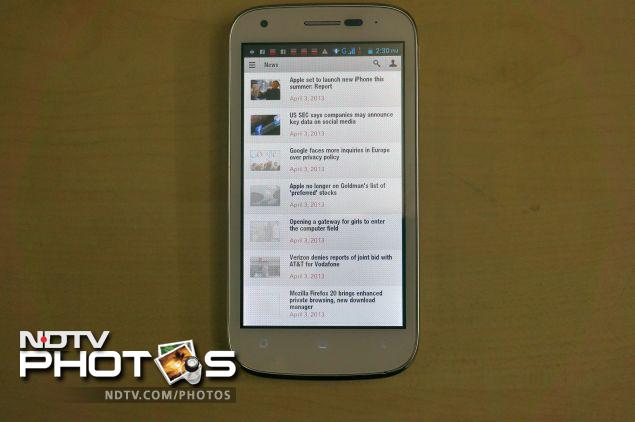 The screen is very reflective and is also a fingerprint magnet.

Camera
Intex Aqua Wonder comes with an 8-megapixel auto focus rear shooter. The camera does an average job of clicking pictures in the broad daylight but does not show the true colour of objects (a grey colour object seemed like a shade of blue in the picture). Also pictures clicked for objects kept in close proximity are not as sharp. The pictures clicked indoors too are nothing to rave about. 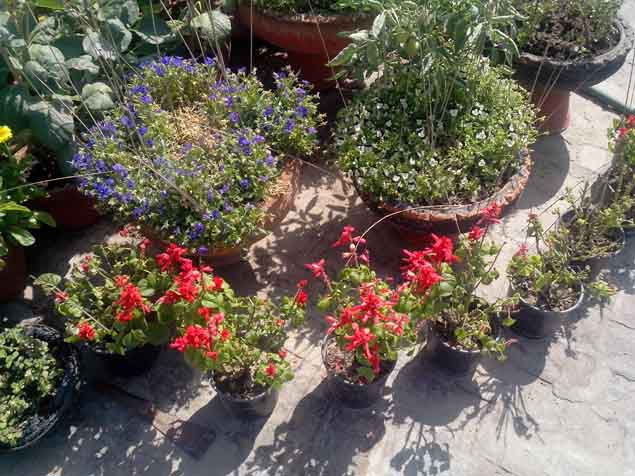 The smartphone also comes with 1.3-megapixel front camera, which can be used to take pictures of self or to do video chatting. The quality of the images and videos through this camera too is a bit grainy.

On the overall, Intex Aqua leaves a lot to be desired on the camera front and a lack of a dedicated camera button is another add-on in this list.

Software/ Interface
The Intex Aqua Wonder runs on Android 4.1.1 (Jelly Bean) out of the box. Intex has skinned some elements of the user interface, such as the lock screen and the notification tray. On the lock screen you have the choice of going to the home screen, launch the message inbox or head to the calling application. Most other smartphones come with just two options, launching a camera or going to the home screen. 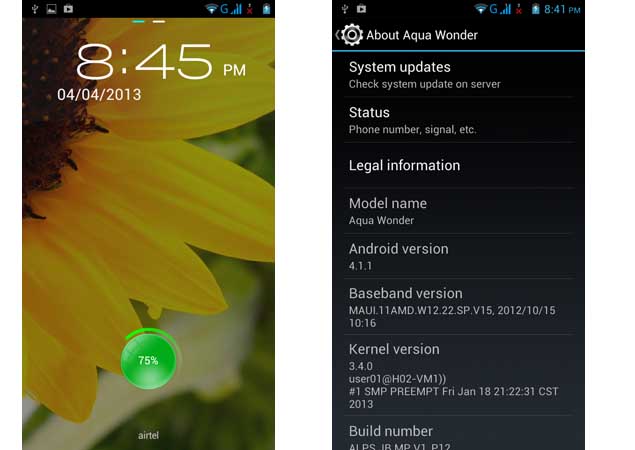 The smartphone can have a maximum of nine home screens to fill with widgets and apps.

Intex Aqua Wonder also comes pre-loaded with plenty of apps such as Documents to Go, Whatsapp, Aaj Tak, Headlines Today, Facebook, Google Maps, YouTube, Nimbuzz, Skype and Google+. Apart from all these, there is also an Intex Zone app, which houses a mobile tracker and can maintain an auto call record. This app can also direct you to the Intex Web Zone which consists of three Intex websites.

Performance
Intex Aqua Wonder is powered by dual-core 1GHz processor along with 512MB of RAM. It comes with 1.93GB of available internal storage on-board, which can be expanded by up to 32GB via a microSD card. Moreover, Intex is giving a 4GB microSD card along with the purchase of this smartphone. The smartphone gives decent performance but one can feel some jerks while trying to multitask.

With Android 4.1 Jelly Bean, the overall experience of navigation through the interface was good, thanks to Project Butter. Intex Aqua Wonder comes with the native Android browsers and web pages render well on the same.

The experience of playing popular games such as Angry Birds, Temple Run and Fruit Ninja is smooth. However, as the smartphones comes with a mere 512MB of RAM, we recommend closing all apps (or at least the ones that take up more memory) running in the background before launching any game.

The audio output quality from the speakers of Intex Aqua Wonder is loud, crisp and clear. There are places where the audio scratches at full volume, but that is not something to really crib about. The call quality through the headsets and speakerphone is good. 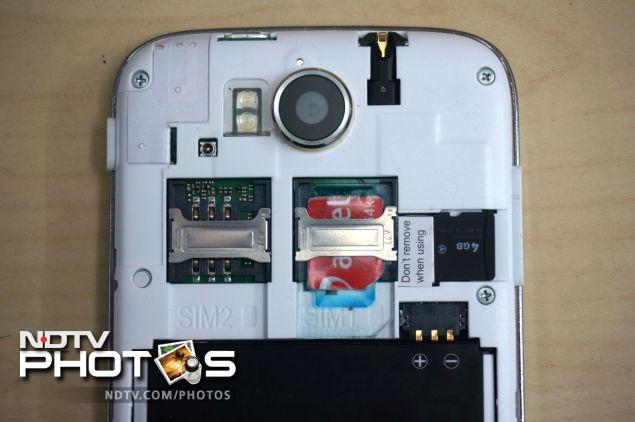 The smartphone comes with 1800 mAh battery, which takes a good while to charge. The company claims that the battery will deliver up to 3.5 hours and a standby of up to 72 hours, which certainly does not seem to be the case. We were looking for a charger by the evening. Our usage consisted of roughly 1 hour of phone calls, two Gmail accounts with push notifications, screen at maximum brightness, Twitter and Facebook notifications and WhatsApp chats.

Verdict
Intex Aqua Wonder is a budget 4.5-inch device, which looks good and has a decent display. However, the company could pay a little more attention to detailing of this smartphone. The smartphone runs on Android 4.1 (Jelly Bean) and gives average performance. In the camera aspect, Intex Aqua Wonder does no wonder. However, the biggest disappointment for us is the battery backup.

There's also the Karbonn S1 Titanium smartphone that one can consider. Priced at Rs. 10,990 this is a quad-core offering that runs on Android 4.1 (Jelly Bean). Karbonn S1 Titanium sports a 4.5-inch qHD (540x960) multi-touch capacitive touch. However, the smartphone has a mere 1,600mAh battery, which is even smaller than the one on-board Intex Aqua Wonder

Nokia Lumia 920 successor 'Catwalk' may be launched on May 15: Report
Google unloads Frommer's guides after less than a year