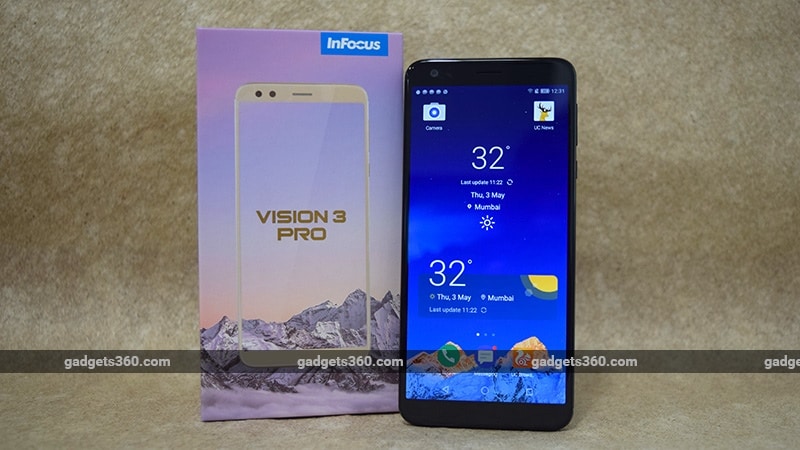 InFocus launched its first smartphone with an 18:9 display, the Vision 3 (Review) late last year. It was just in time to grab some attention, as we saw a lot of manufacturers shifting to this new aspect ratio in 2018. The Vision 3 looked like a good phone to buy with very few alternatives at its point. However, things have changed rapidly with the introduction of new phones such as the Redmi 5 (Review), Redmi Note 5 (Review), and Asus ZenFone Max Pro M1 (Review).

To give itself a fighting chance, InFocus has gone back to the drawing board and beefed up the specifications of the Vision 3, creating the Vision 3 Pro. But will this be enough to take the lead again? We find out.

The Vision 3 had a plastic body, but the Vision 3 Pro seems to have gotten an upgrade. It sports a metal backplate in the centre which gives it a premium feel in the hand. There are plastic caps at the top and the bottom for the antennas, and to keep costs down. At the front, it has a 5.7-inch display which has good colour reproduction and viewing angles. It is also bright enough to be visible outdoors. There are options to tweak the colour temperature and change the display output from standard to dynamic, which is a welcome addition.

The buttons on the Vision 3 Pro are positioned a little too high, forcing you to stretch your thumb. InFocus has put the Micro-USB port at the bottom between two grilles, of which only the left one is a loudspeaker. The 3.5mm headphone socket is positioned on the top. The selfie camera is in one corner, and there's also a notification LED next to the earpiece.

The left side of the phone has the hybrid dual-SIM tray with one Micro-SIM slot for the first SIM and a Nano-SIM slot for the other. Since the second slot is a hybrid one, you can use a microSD card to expand storage instead of a second SIM. At the back, the Vision 3 Pro has dual cameras with a single-LED flash. The fingerprint scanner is also on the back and is positioned conveniently.

The 18:9 aspect ratio makes this phone tall and narrow, so it's comfortable to hold. It's also quite light, and has rounded edges. In the box, you get a Micro-USB cable, a 7.5W charger, and in-ear headphones. The quality of these accessories isn’t the best, and the headphones don’t sound good. If you like your music, we’d recommend that you take a look at any of these headphones under Rs. 1000.

The internals have been upgraded to justify the 'Pro' tag on this phone. It sports a MediaTek MT6750 processor compared to the MediaTek MT6737H in the Vision 3. This is an octa-core processor with two clusters of A53 cores. One cluster is clocked at 1.5GHz while the other is clocked at 1GHz. The processor is a bit dated, and was seen powering devices such as the Asus ZenFone 3S Max (Review) and Vivo V5s (Review) launched last year. The phone has 4GB of RAM and 64GB of storage which is expandable by up to 128GB. The InFocus Vision 3 Pro supports 4G as well as VoLTE on both SIMs.

On the software front, the phone runs on Android 7.0 Nougat which feels outdated now that Android Oreo has been here for a while. InFocus has added a few customisations to the OS, so it misses out on an app drawer, and all apps are available right on the homescreen. Bloatware has been kept low so you get Amazon Shopping, Prime Video, UC Browser, and MKey keyboard, but all of them can be uninstalled. There are a few additions such as S Boost which is a resource management app of sorts. It lets manage background apps and helps keep RAM free to prevent the phone from bogging down.

A Special Settings tab lets you set up the dual apps feature under AppTwins, motion gesture controls, screen recording options, and a private space for confidential data. InFocus has also added a Face Unlock option which we found to be quick.

With the chage of processor in the Vision 3 Pro, performance is improved compared to the Vision 3. The processor, although dated, is powerful enough to deliver a good experience with day-to-day tasks such as calling, messaging on social media apps, and general Web browsing. We have seen that the phone stops a few apps from running in the background which felt unnecessary considering it has 4GB of RAM onboard.

The Vision 3 Pro clocked 53,942 in AnTuTu, and 620 and 2640 in the single-core and multi-core tests in Geekbench 4 respectively. For graphics, it managed 24fps in GFXBench T-Rex and 518 in 3DMark Slingshot. Sadly it isn’t in the same league as some of its competitors. The Redmi 5 (Review) scores significantly higher, and the newly launched Asus ZenFone Max Pro M1 (Review) scores almost twice as much in every benchmark. The Vision 3 Pro handles basic games quite well but we did see stutter when playing Shadow Fight 3.

Battery life varies heavily based on what you are doing with the phone - play games quite often or use heavy apps, and you will see the battery level drop quickly. We also noticed that the phone would get warm after gaming for around 15 minutes. The Vision 3 Pro managed 12 hours and 18 minutes in our HD video loop test, and lasted us for one day with basic usage. If you play games quite often through the day, you might need to find the charger a little early.

The Vision 3 Pro has a dual camera setup at the back which consists of a 13-megapixel primary sensor and an 8-megapixel sensor with a wide-angle lens. Apart from the standard photo and video modes, Infocus has added time-lapse, beauty, panorama, and pro modes. The photo mode has a quick toggle for portrait shots with depth effects, and there's an option to swap between the primary sensor and the wide-angle sensor. There are also more options including Multi, which lets you take multiple photos to create a collage; and PIP, which uses both the rear camera and the selfie camera to superimpose shots in one frame. HDR is available but needs it takes a few taps to find, and we would have preferred a quick toggle.

Photos taken with the primary sensor in daylight are decent, but some detail is lost in landscape shots. The secondary sensor with its wide-angle lens helps you capture wider frames but also misses out on details. Autofocus with the secondary sensor is slower than with the primary one. We did not find any significant barrel distortion or vignetting when shooting with the wide-angle lens. There was some lag when taking shots in portrait mode, and the edge detection still needs improvement. Macro shots have decent amounts of detail and good separation between the subject and the background. However, the output was a little dull.

Camera performance in low light isn’t all that great either. The Vision 3 Pro manages to keep noise under control, but at the cost of details. When shooting in low light, it drops the shutter speed which requires a steady hand or you'll end up with blurry shots.

Video recording maxes out at 1080p for both the front and the rear cameras, but competitors like the Redmi Note 5 are capable of 4K video recording. There is no form of stabilisation, and you will need a steady hand while shooting. The 13-megapixel selfie camera takes good photos, and beauty mode is enabled by default. Zoom in to a selfie and you see that it does lack in detail, but is shareable on social media apps.

Verdict
The InFocus Vision 3 Pro is an upgrade over the InFocus Vision 3, it has received a powerful (but older) processor, more RAM, and a big bump in storage. However, the competition has also levelled up significantly, and phones such as the Redmi 5 (Review) and Redmi Note 5 (Review) outperform the Vision 3 Pro easily. The recently launched Asus ZenFone Max Pro M1 (Review) costs the same amount at Rs 10,999, making the Vision 3 Pro look overpriced for what it offers. If you are in the market looking for a smartphone with a budget at exactly this level, you might want to skip the Vision 3 Pro and check out the ZenFone Max Pro M1 instead.

What's Good for Apple Isn't Always Best for iPhone Suppliers
LG G7 ThinQ: 7 New Features That You Should Know About