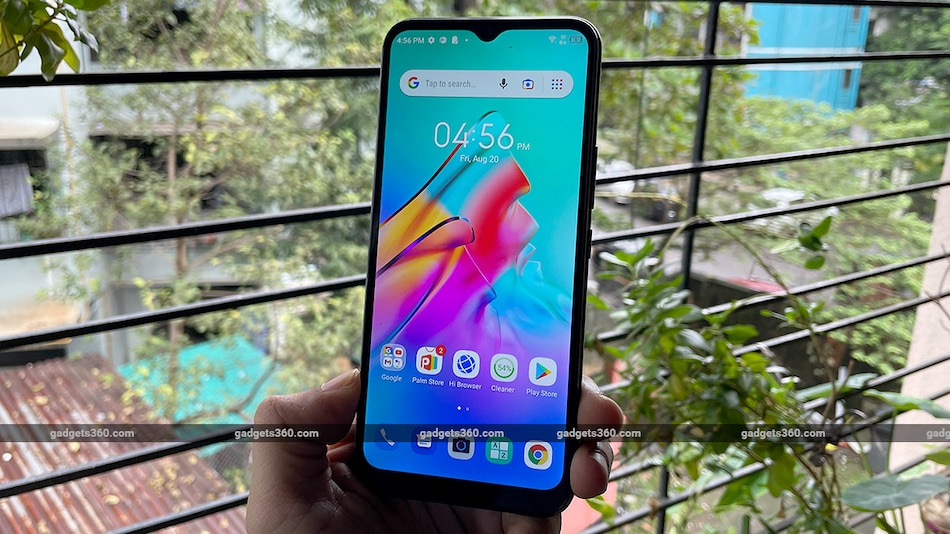 Infinix Smart 5A is the latest addition to the Smart series, and is the successor to the infinix Smart 5. The Smart 5A is a budget Android smartphone that is aimed at the entry-level market. Infinix has also partnered with Reliance Jio to offer benefits with the Smart 5A, effectively reducing the cost of the device. Is the Smart 5A a smart choice, or do budget smartphones still require you to make severe compromises? Let's find out.

The Infinix Smart 5A was priced at Rs. 6,499 for its first sale, but the price has now gone up to Rs. 6,699. Reliance Jio has an “upfront cash support” offer that credits Rs. 550 to a buyer's bank account, but the caveat is that the device will be locked to a Jio SIM. The Smart 5A is available in a single configuration only, with 2GB of RAM and 32GB of storage. It is available in Ocean Wave, Quetzal Cyan, and Midnight Black.

The Infinix Smart 5A is a big smartphone and sports a 6.2-inch display with a dewdrop notch at the top. It has relatively slim bezels at the sides and the top of the screen, while the chin is way thicker. Infinix offers a dual flash setup at the front, and two LED flashes sit on either side of the selfie camera in the top bezel. The plastic body doesn't feel premium, but it's acceptable at this price.

On the right are the power and the volume buttons, while the left side has the SIM tray. These buttons were easy to reach and offered a clicky response when pressed. There's a 3.5mm headphone jack, a Micro-USB port, the primary microphone, and a speaker at the bottom. Infinix could have done away with the Micro-USB port and gone with a USB Type-C port on this device.

The Infinix Smart 5A isn‘t too thick at 8.75mm or too heavy at 183g. I found it to be manageable for one-handed use. At the back, it has a fingerprint scanner that I found to be slightly higher than ideal for reach. The Smart 5A has a dual rear camera setup in a module that is slightly raised. The glossy back panel picks up fingerprints easily, and they're highly visible at certain angles. Infinix does offer a transparent case in the box, which could help with this

Infinix Smart 5A specifications and software

Infinix has picked the MediaTek Helio A20 SoC to power the Smart 5A. This is a quad-core processor based on a 12nm process. You only get 2GB of RAM and 32GB of storage. You do have the option to expand storage by up to 256GB using the dedicated microSD card slot.

The Smart 5A has a 6.52-inch HD+ display with a tall 20:9 aspect ratio. It has a peak brightness of 500 nits which is decent indoors but might feel slightly inadequate outdoors. The Smart 5A has support for Bluetooth 5, dual-band Wi-Fi, dual VoLTE and VoWiFi. There's a 5000mAh battery, and you get a 10W charger in the box.

You get Android 11 Go Edition on the Infinix Smart 5A

In terms of software, the Smart 5A runs XOS 7.6 on top of Android 11 (Go Edition). My unit had the June Android security patch. The UI has a few customisations along with a number of preinstalled apps. AHA Games and Palm Store come preinstalled, and are alternatives to the Play Store. I found the Palm Store to be spammy as it kept pushing notifications every day. There are some useful features such as WhatsApp mode, which only allows data access to WhatsApp Messenger. There's also a smart panel that can be accessed from any screen, with shortcuts to your favourite apps.

The Infinix Smart 5A is an entry-level budget smartphone and you'll need to temper your expectations of it. Basic usage was manageable, but occasionally I had to wait for it to load apps. Heavy apps do take a lot longer to load as well. With only 2GB of RAM, the multitasking abilities of the Smart 5A are limited, but acceptable given its price. Unlocking the Smart 5A using the fingerprint scanner or face recognition took slightly longer occasionally.

The Smart 5A takes some time to load heavy titles, though casual games run fine

I played Battlegrounds Mobile India (BGMI) on the Smart 5A and it took a considerable amount of time to load. It defaulted to Smooth graphics and Medium frame rate. There was frequent lag and stutter at these settings, especially in dense areas of the map. However, casual games such as State.io ran fine on the phone without any issues.

I got decent battery life from the Infinix Smart 5A, and it lasted me a day and a half with my moderate usage. It lasted for 15 hours and 5 minutes in our HD video loop test. The supplied 10W charger got the phone to 20 percent after 30 minutes and to 44 percent in an hour. Charging it completely took over two hours.

You get a very basic dual camera setup on the Smart 5A, with an 8-megapixel primary camera and a secondary AI (depth) camera. For selfies, it has an 8-megapixel camera in the dewdrop notch, and there are two selfie flashes tucked away in the top bezel. The camera app is simple and I could choose between different shooting modes very easily. It has AI scene detection as well as auto HDR. I did notice sluggish behaviour while using the camera, and the AI took some time to detect each scene.

Daylight shots taken with the Infinix Smart 5A were average. The dynamic range wasn't good, and photos appeared flat. Auto HDR was a bit slow to kick in, and when it did, it made a slight improvement in the dynamic range but details still weren't very good.

Close-up shots were decent but the phone was a tad slow to lock focus. The output does have a depth effect and details were decent too. There is a Bokeh mode which is intended for you to shoot portraits. This mode did not work well for objects but it did work on faces. The output was strictly average and you don't get to set the level of background blur.

Low-light shots were below average. The output was dark and wasn't sharp. This phone doesn't have a Night mode. Selfies taken in daylight were average and appeared flat. In low light, you can put the dual LED flashes to use for slightly better output. Video recording tops out at 1080p for the primary and selfie cameras. There is no video stabilisation on the Smart 5A. Daytime footage was strictly average, and low-light footage was nearly unusable.

The Smart 5A cuts quite a few corners to get to the sub-Rs. 7,000 price level in 2021. It has a big display and a decent 5,000mAh battery but you'll have to compromise on the cameras. You get decent performance for basic use from the Helio A20 processor, but Infinix could have offered a 3GB RAM option for those willing to spend a little more.

If you are on a tight budget you could opt for the Infinix Smart 5A. The Xiaomi Redmi 9A is an alternative that offers a more powerful processor and a 3GB RAM option, but you'll lose out on a fingerprint scanner. If you can spend a little more, the Moto E7 Power could also be good value for its price.