Infinix Smart 5 Review: Does it Offer the Best Value? 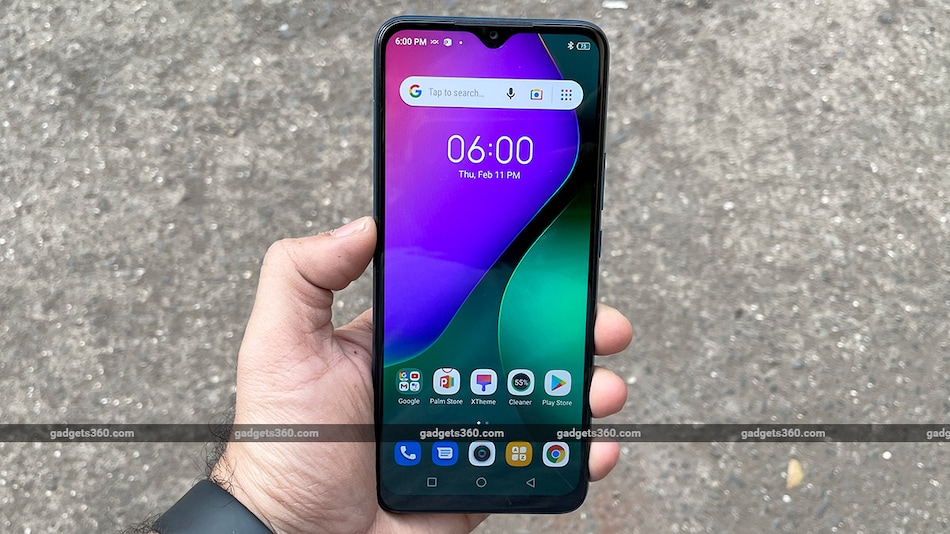 The Infinix Smart 5 was launched recently in the sub-Rs. 8,000 price segment as the newest addition to the Smart series. When I unboxed this smartphone, I was surprised to see how big it is, thanks to the bigger-than-usual battery capacity, considering its price. The Smart 5 has some decent specifications on paper, and an attractive starting price of just Rs. 7,199. Does that make it the best pick for those on a very tight budget? I put the Infinix Smart 5 to the test to find out.

The Infinix Smart 5 is physically bigger than most other smartphones in this price range. The front is dominated by a 6.82-inch HD+ display with fairly thick bezels all around. The bottom chin is thicker than the sides, but it's acceptable given the price of the smartphone. At the top of the display sits a selfie camera in the dewdrop notch, along with a big earpiece just above it. This earpiece also doubles up as a loudspeaker. The Smart 5 has a selfie flash that's hidden in between the display and the frame, just like on a few other Infinix smartphones.

One of the first things I noticed about the Smart 5 was its weight. At 207g it is among the heaviest smartphones in its price range. A lot of the weight comes from the big 6,000mAh battery. You will notice how bulky this phone is when you pick it up. Infinix has tried to make this less apparent by curving the sides to make gripping the device better.

The Smart 5 has a rear-mounted fingerprint scanner, which I found to be placed slightly higher than ideal. You'll find the power and volume buttons on the right side of the frame. The power button is convenient but reaching the volume buttons might require you to shuffle the phone in your hand. The Smart 5 has the SIM tray on the left, and it has two Nano-SIM slots as well as a microSD card slot.

The Infinix Smart 5 has a flow pattern on the back

Infinix offers the Smart 5 in four colour options: Morandi Green, 7° Purple, Obsidian Black, and Aegean Blue. I had the Aegean Blue variant for this review. Infinix has gone with a flow pattern on the back of the Smart 5 which pops when light hits it. The back is glossy and is a fingerprint magnet. There is a dual-camera setup at the back, and Infinix has designed it to look like there are three cameras. Thankfully, the module doesn't protrude a lot and sits nearly flush with the rear panel.

At the bottom, the Smart 5 has a Micro-USB port, with a 3.5mm headphone jack and the primary microphone on either side. Infinix ships a screen protector in the box along with a plastic case. You also get a 10W charger in the box.

The Smart 5 has modest hardware. It is powered by the MediaTek Helio G25 octa-core processor. This processor also powers the Xiaomi Redmi 9A, which is similarly priced. Infinix has paired the Helio G25 with 2GB of RAM and 32GB of storage. There is only one configuration of the Smart 5, so if 2GB of RAM seems inadequate for your needs, you might have to look elsewhere. Storage on the other hand is expandable by upto 256GB using the microSD card slot.

Connectivity options on the Smart 5 include Bluetooth 5, VoWiFi, and Dual 4G VoLTE. The phone runs Android 10 with Infinix's custom XOS 7 UI on top. Infinix has made some customisations and you do get a few apps and games preinstalled on the smartphone. Palm Store, an alternative to the Play Store, is one of the preinstalled apps. It kept pushing notifications for different apps and games at least once a day. I couldn't find a way to uninstall the app, but could disable it.

The UI on the Infinix Smart 5 is easy to use and I did not have any issues finding what I was looking for. There is theme support and you can customise the UI your way. Infinix has also added a Game Mode on the Smart 5 which turns off auto-brightness and prevents the phone from switching between data and Wi-Fi while you are gaming.

This is one area in which the Smart 5 might disappoint heavy users. The Helio G25 is capable of handling casual usage, but ramp up the workload and it stutters while delivering. With only 2GB of RAM, there isn't a huge scope for multitasking, and I found the Smart 5 constantly killing apps in the background to keep RAM free. This is expected given the price it is targeted at. For people who only have simple requirements and don't do much at the same time, such as watching videos or using messenger apps, the performance is just about adequate.

I found the fingerprint scanner at the back to be accurate, and unlocking the Smart 5 was quick. The phone uses its earpiece as the loudspeaker and I found the volume to be adequate for video watching. The display of the Smart 5 is decent indoors but I found it to be reflective outdoors.

The Smart 5 was put through our usual benchmarks, and it managed to score 88,375 in AnTuTu. In PCMark Work 2.0, it scored 5129 points. In Geekbench 5's single-core and multi-core tests, the Smart 5 managed to score 130 and 453 points respectively. The Smart 5 also managed 27fps and 5.3fps in graphics benchmark GFXBench's T-Rex and Car Chase scenes respectively. The Smart 5 performed better than the Nokia 2.4 (Review), but was behind the Redmi 9 (Review) in a few tests.

I loaded up Call of Duty Mobile, and the phone was able to run it at Low graphics quality with the frame rate set to medium. I did notice stutters while playing this game, and the smartphone did slow down occasionally. If you are a gamer hoping to play titles like Call of Duty Mobile, the Smart 5 isn't going to be satisfactory. After playing this game for ten minutes, the phone was barely warm to the touch, and showed a 2 percent battery drop which is acceptable.

You see the advantages of the low-power HD+ display and the Helio G25 processor when it comes to battery life. The Smart 5 lasted me beyond a day and a half of everyday usage without any issues. It lasted 22 hours and 25 minutes in our HD video loop test. A downside of the big battery is that charging takes a ridiculously long time, even when using the bundled 10W charger. The phone only got to 18 percent in 30 minutes and 36 percent in an hour. Charging it completely took over two and a half hours.

The Infinix Smart 5 has a dual-camera setup for a budget phone, consisting of a 13-megapixel primary camera and depth sensor. At the front, it has an 8-megapixel camera and a selfie flash. The camera app is quite basic and easy to use. The primary camera uses AI and was fairly quick at detecting the scene I was shooting.

Daylight shots taken with the Smart 5 were strictly average and had slight grain visible on zooming in. The Smart 5 did occasionally overexpose the sky in a few shots, failing to meter light correctly. Text at a distance wasn't legible either.

The Smart 5 was a bit slow at times to lock focus when shooting close-ups. When it did, it managed to capture good shots with a soft background blur. Portrait shots can be taken using the Bokeh mode but you don't get the set the level of blur. Edge detection was hit-or-miss.

The AI detects low light and sets the camera up accordingly. However, low-light shots lacked sharpness and the colour accuracy was off. This phone doesn't have a Night mode to improve low-light photography either.

Selfies taken with the 8-megapixel shooter were average in daylight but low-light performance was poorer. You can use the selfie flash for a brighter result but it doesn't make a significant difference to image quality.

Video recording tops out at 1080p for the primary camera and there's no stabilisation. Footage was shaky and the dynamic range wasn't very good either.

The Infinix Smart 5 is a budget smartphone with a big display and a big battery. Given these USPs, this phone is good to watch videos on and play casual games. You also won't have to charge it very often since it offers good battery life. However, with only 2GB of RAM, the performance isn't the best we have seen at this price level. The Poco C3 (Review) and Micromax In 1B (Review) are suitable alternatives to the Infinix Smart 5, offering better performance for roughly the same price. The Moto E7 Power is also expected to launch soon, and could be an interesting alternative.