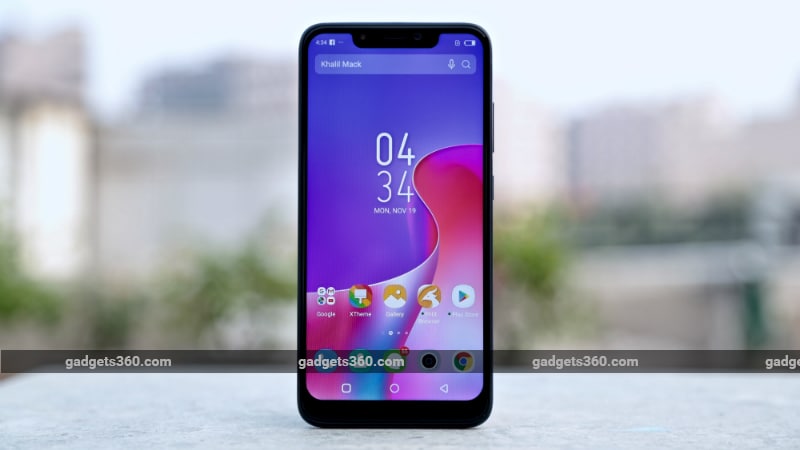 Hong Kong-based Transsion Holdings' Infinix brand has unveiled yet another smartphone in its Hot series in India, the Hot S3X. The phone, which has been launched just eight months after its predecessor the Hot S3, brings with it minor upgrades such as a larger display with a notch, dual rear cameras, and an improved selfie camera.

A departure from the previous generation's matte finish, the Infinix Hot S3X sports a glossy gradient back panel with a slight mirror finish. It doesn't look as plain as before, and the curved sides provide a good grip. We got the Ice Blue colour for review, and this phone is also available in Black and Grey options, both of which also have a similar gradient design. The finish is prone to fingerprints and smudges, but Infinix has you covered with a bundled soft TPU case in the box.

The phone sports a large 6.2-inch HD+ display panel with a resolution of 720x1500 pixels and a rather odd aspect ratio of 18.75:9. The top border has been replaced by an iPhone X-like notch, but the chin remains quite large. All corners of the screen are hard to reach with one finger, and this phone is not made for one-handed usage.

There are onscreen navigation buttons in place of capacitive or physical keys, below the display. The 16-megapixel selfie camera, dual LED flash, and earpiece are placed within the notch.

The right of the handset has the volume buttons and the lock/ power button. We did not like the placement considering there is no difference in the texture of the buttons, and we ended up with several unintended presses. The tray on the left can house two Nano-SIMs and a microSD card at the same time. The Micro-USB port, external speaker grille, and a microphone are placed on the bottom, while the 3.5mm headphone jack is on top. The new dual camera setup on the rear is placed vertically. The rear-mounted fingerprint sensor's placement makes it feel natural to use.

Infinix has gone with the same octa-core Qualcomm Snapdragon 430 SoC on the Hot S3X, as it did with its predecessor. Now quite dated, this processor has eight Cortex-A53 CPU cores running at speeds of up to 1.4GHz, coupled with an Adreno 505 GPU. Interestingly, the Hot S3X competes directly with the company's first Android One-based smartphone, the Infinix Note 5 (Review), which is powered by a MediaTek Helio P23 SoC that performs better at least on paper. There is only one configuration of the Hot S3X, with 3GB of RAM and 32GB of internal storage. We noted that there was only about 21GB of free space on the first boot. Storage can be expanded by up to 128GB using a microSD card.

The 6.2-inch HD+ panel does not have any advertised protection. It has decent viewing angles and good visibility in sunlight. The maximum brightness could have been better, but the lowest setting is comfortable for use in the dark. Infinix has opted for the same 4,000mAh battery as that in the previous-gen Hot S3, and it also supports 10W charging.

Connectivity options include Wi-Fi 802.11 b/g/n, Bluetooth, Micro-USB with OTG, a 3.5mm headphone jack, and GPS. The Infinix Hot S3X is a dual-SIM smartphone with two Nano-SIM slots, both of which support 4G. You can use mobile data on only one SIM at a time.

The phone ships with the custom Hummingbird XOS 3.3 Lite, based on Android 8.1 Oreo. An Android 9.0 Pie update hasn't been announced yet. While the functionality of this UI is similar to stock Android, the design is completely different. It has a default rounded square shape for all icons, and adds ugly white borders to icons that don't adhere to this design scheme.

The Infinix Hot S3X has custom versions of basic apps such as Phone, Contacts, Camera, Weather, and Messages. There's also the Phoenix Web browser. The phone also has Infinix's own apps preloaded: Carlcare for after-sales support; XHide to hide pictures, videos, and voice recordings; XTheme to help you with different themes; and the XClub customer forum. A ‘Freezer' feature helps you free up RAM and prevent specific apps from running in the background for a stipulated amount of time.

Other than that, you get the Phone Master app for cleaning up RAM, locking specific apps, managing data usage, and more. A handy Smart Charge mode helps you with reminders to avoid overcharging the battery. You can swipe down on any of the home screens to open up Google Search.

With players including Xiaomi and Realme focusing aggressively on the sub-Rs. 10,000 and sub-Rs. 15,000 price segments, expectations are high. In our experience, the Infinix Hot S3X did not offer performance worthy of its Rs. 9,999 price tag. Overall UI performance was below average, and we noticed several stutters and instances of lag in our daily usage.

Even the fingerprint sensor was not up to the mark; it was accurate but didn't unlock the smartphone quickly enough. We have come to take blazing fast unlocking speeds for granted even on budget phones, and the Hot S3X seemed significantly slower in comparison. The phone also vibrates every time you unlock it, which could be frustrating for some. On the other hand, the fingerprint scanner does offer added functionality such as allowing you to take photos, accept calls, browse through pictures, and dismiss alarms using gestures.

To our utter disappointment, face unlock using the selfie camera was even slower, leading us to use a lock pattern most of the time.

The display on the Hot S3X offers good colour reproduction, and watching videos and browsing photos was a pleasant experience. Even games looked vibrant on the 6.2-inch screen.

The dated processor showed its weakness in the benchmarks we ran on the Hot S3X. It scored 58,389 in AnTuTu, and in Geekbench, it got a single-core score of 652 and a multi-core score of 2,075. GFXBench's Car Chase test ran at a paltry 5.3fps but the T-Rex test gave us a decent 26fps, which is similar to what we observed with the Infinix Hot S3 earlier this year.

Heavy apps took their sweet time to load, and there was noticeable stutter when scrolling through Facebook and Twitter. We were left killing apps frequently in an attempt to make the experience more fluid, which speaks volumes about the phone's RAM management.

Lighter games like Subway Surfers and Candy Crush ran smoothly on the Infinix Hot S3X. Our experience with heavier games such as Shadow Fight 3 was also largely fine, with a hint of stutter especially during the tutorial.

The Infinix Hot S3X has a 4,000mAh battery, just like the Hot S3. It managed to clock only about 11 hours and 5 minutes in our HD video loop test, compared to more than 13 hours for its predecessor, which is still good for the price point. As for day-to-day usage, even if we started our day with a 100 percent charge in the morning, we needed a quick 30-minute boost by 4-5pm to get through the evening. Our usage included checking email, browsing social media apps a few times, and scattered light gaming sessions. The phone charged from 0 to 100 percent in 2 hours and 10 minutes with the bundled 10W charger.

Camera performance is one of the highlights of the Infinix Hot S3X. It has a 13-megapixel primary camera and a 2-megapixel depth sensor at the back for portrait shots. The app, however, does not show previews of portrait shots as you are trying to frame them. This often led to shots that were out of focus, which was frustrating. Other than that, the camera app offers fairly basic controls and modes including AI Camera, Video, Beauty, Portrait, Panorama, and Night.

Daylight shots were above average with good clarity and overall colour reproduction. The rear camera handled brightness and contrast levels well. Landscape shots and photos of the sky were exposed well, without parts of the scenery getting blown out.

Even low light performance was decent, and the phone could take good portrait shots even at night. The Hot S3X could not manage good landscape night shots, but we aren't complaining much at this price. Stability was also a bit of an issue and you need to stand still until the photo is saved to avoid blur.

The 16-megapixel fixed-focus front camera gave us mixed results. It takes crisp and clear selfies, but artifically whitens them too much for our liking. That said, some people might prefer this mode.

In low light, selfies are not beautified too much, but they fall short on clarity. The front-facing LED flash helps when taking selfies without a good light source nearby. Video recording maxes out at 1080p for both cameras.

Verdict
The budget segment in India is getting tougher to crack, with super value-for-money options right now. The Infinix Hot S3X is not a huge upgrade over the Hot S3, but rather a lukewarm update with some current-day features such as a display notch and dual cameras. It is lacking in terms of overall performance and the user experience, but has decent cameras, a vibrant display, and a good design.

With a price of Rs. 9,999, you are better off going for the Realme 2 (Review) or Redmi 6 Pro (Review). If you can stretch your budget slightly, you could choose the more powerful Nokia 5.1 Plus (Review) or Asus ZenFone Max Pro M1 (Review).

The Infinix Note 5 (Review), the company's first Android One smartphone, is also a good option in the sub-Rs. 10,000 segment.