The Infinix Hot 7 has an affordable price tag in its favour, but is it the best choice for buyers? 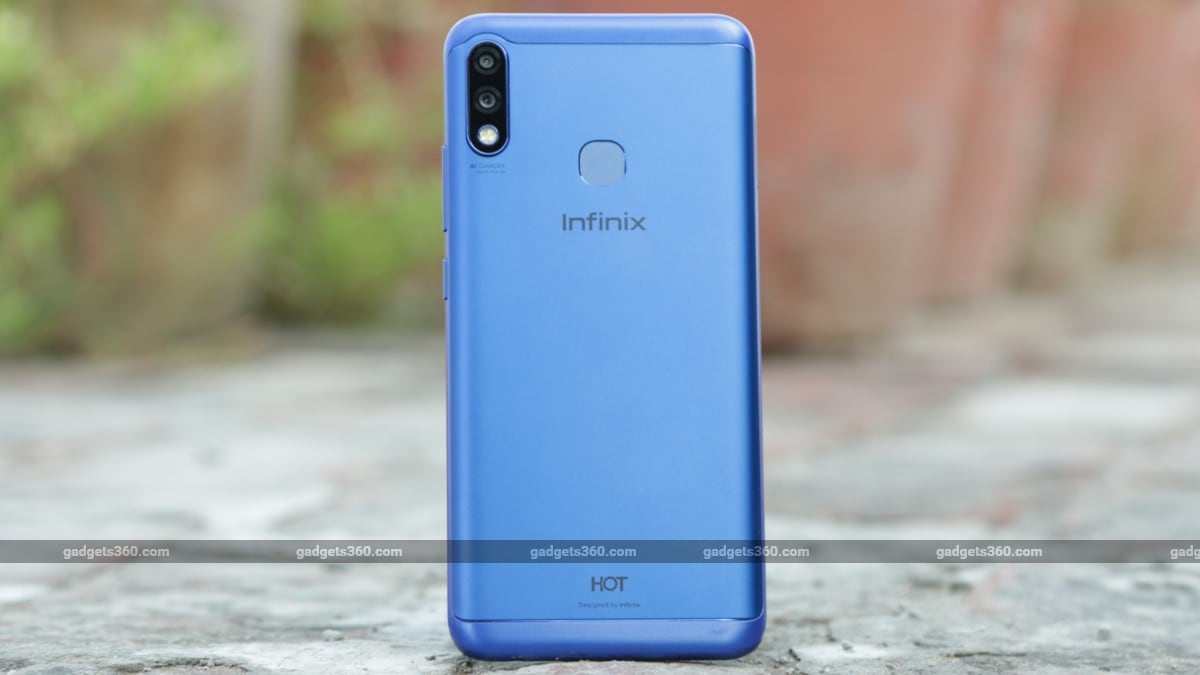 The sub-Rs. 10,000 price bracket is hotly contested, and one brand that has been trying really hard to leave a mark here is Infinix. From launching the Infinix Hot 7 Pro (Review) that offers 6GB of RAM for less than Rs. 10,000 to a triple rear camera phone in the Infinix Smart 3 Plus (Review) that costs just Rs. 6,999, Infinix has unveiled numerous devices in quick succession that offer a lot for their asking prices. The Infinix Hot 7 is the latest phone from the Hong Kong-based company, and it aims to strike the right balance between affordability and features. Is the Infinix Hot 7 good enough to challenge the popular Realme and Redmi-series phones that dominate this segment? We review to find out.

The Infinix Hot 7 looks identical to the Hot 7 Pro (Review), and if placed side by side, it would be nigh impossible to discern one from the other. That's not necessarily a bad thing. Despite its low asking price, the phone features a metallic body, giving it a premium look and feel. There are plastic strips at the top and bottom that also run around the edges of the phone.

The Infinix Hot 7 is relatively thin and weighs 159g. The rounded sides and corners provide a comfortable grip, but the exterior is quite slippery, making one-handed usage somewhat of a struggle. The textured power button is located on the right, and a volume rocker sits above it, although it is positioned a bit too high.

On the left side, one can find the SIM tray which can accommodate two Nano-SIMs and a microSD card of up to 256GB capacity simultaneously. The Micro-USB port, speaker, and 3.5mm headphone socket are on the bottom.

The phone has a wide notch at the top that houses two cameras and a soft LED flash.

The dual-camera module on the back of the Infinix Hot 7 creates a small hump and is surrounded by a metallic rim to help keep the lenses from getting scratched while the phone is lying on a flat surface. A fingerprint sensor sits beside the camera module. Over on the front side, there is a large display with a wide boat-shaped notch that houses the dual front cameras and a soft LED flash, while the thin earpiece strip is positioned above it.

The side bezels are quite thin, but the chin is thicker. Overall, the Infinix Hot 7 has the kind of familiar utilitarian design that we have seen on a lot of smartphones. Thankfully, the build quality is decent and we did not notice any flex. We have the phone's Aqua Blue variant for review, but it is also available in Midnight Black.

The Infinix Hot 7 runs XOS 5.0 based on Android 9 Pie. Our review unit was running the June security patch. There is a tonne of pre-installed bloatware, ranging from third-party apps such as Instagram, Facebook Messenger, Facebook, Opera News, Danger Dash, and Flipkart to name a few. Then there are in-house apps called XTheme, XClub, and XShare.

The phone also has a pre-installed app called Palm Store, which is basically a third-party app repository that is filled to the brim with ads and also sends a tonne of notifications. Add to that notifications sent by the XTheme app and the pre-loaded PHX Browser, all of which promoted us us to revoke their permissions to avoid getting bombarded with spam.

Another annoyance was the carousel of instant game cards that appears at the top of the app drawer. These are basically games that can be played without installing an app. These games are of low quality and riddled with intermittent ads, and disappointingly, there isn't an option in the phone's Settings app or anywhere else to hide or disable them.

Even more surprising is the fact that Kika is the default keyboard that comes with XOS 5.0. To recall, this keyboard app was booted from the Play Store last year by Google over ad fraud.

XOS 5.0 also offers some nifty features such as Bike mode and WhatsApp mode. The Bike Mode is present as a toggle in the quick settings panel for easy access. Enabling WhatsApp mode restricts the data access of all apps running in the background except WhatsApp. There is also a customisable Smart Panel that can be accessed by tapping on a horizontal bar at the right edge of the screen. It is populated with shortcuts to apps and tools that are used frequently.

The phone has dual rear cameras, but their imaging output is quite underwhelming

You can choose between the classic three-button Android navigation layout and a ‘Mix navigation' option, which is similar to the two-button interface introduced by Android Pie. There's also a third option that completely dispenses with on-screen buttons and instead relies on upward swipes from their respective positions. Unlike the implementation of swipe-based navigation on Samsung phones with OneUI, you cannot swap the positions of the back and multitasking buttons.

The display on the Infinix Hot 7 is good for the asking price, and has a peak brightness of 500 nits, which we found to be sufficient for the most part. Reading content and watching media was easy on the eyes under daylight, and we were also pleased with the viewing angles, as there was minimal colour shift when tilting the phone while watching content. However, colours appeared inaccurate and slightly washed out when compared to an OLED panel. There is also no Gorilla Glass protection, and the phone does not come with a pre-applied screen protector either.

As far as performance goes, the MediaTek Helio P25 powering the phone handled regular productivity tasks with ease. However, we noticed jitters when switching between apps and split-screen multitasking when multiple apps were running in the background.

In terms of gaming, the Infinix Hot 7 can handle casual games without a hitch, and also ran PUBG Mobile Lite smoothly. However, the phone did struggle with graphics-intensive titles such as PUBG Mobile and Asphalt 8. Even playing these games at their low presets, there were frequent frame drops and stutters, as well as instances of the phone becoming unresponsive for a few seconds occasionally.

It runs XOS 5 based on Android Pie, but the UI is riddled with bloatware

Coming to benchmark scores, the Infinix Hot 7 scored 925 and 4,149 points respectively in Geekbench 4's single-core and multi-core tests. The phone also put up 88,738 in AnTuTu, which is significantly lower than the Snapdragon 632-powered Redmi 7's tally of 103,574 points. The Infinix offering managed 556 in the 3DMark Sling Shot test, and 12,610 in the Ice Storm Unlimited test.

As far as the camera quality goes, the Infinix Hot 7 can be described as average at best. Here's the good part — photos taken in daylight looked vibrant and sharp, with decent depth and dynamic range. On the flip side, you need to have really stable hands for the phone to lock the focus accurately, and must also be willing to forego natural colours. There's also intermittent shutter lag, and image processing is slow, which is particularly noticeable when capturing photos in low light.

Photos captured by the phone under natural light were warm and slightly oversaturated. Even though the contrast was decent, there was not much in terms of surface details. Macro shots looked pleasant, but again, colours were artificially boosted and backgrounds were overexposed. The exposure control is a bit finicky, and even a small adjustment on the slider drastically brightens or darkens the frame.

The HDR mode helps a little with the background overexposure issue, but colours still look oversaturated. For shots taken indoors, colours were muted and there was a healthy amount of softening to peripheral elements. Low-light photos had a lot of noise and exhibited grainy textures. Focus lock again proved to be an issue in low-light scenarios and it was difficult to capture crisp photos.

The portrait mode does a good job of highlighting the object in focus, and even though edge detection was not always accurate, the depth and subject separation was commendable for a phone that costs so little. The application of the blur effect was inconsistent, but we have seen most phones in this price bracket struggle with recognising and blurring spaces between people's limbs, for example.

Selfies captured under daylight were bright with slightly overexposed backgrounds, but skin tones looked natural and there was minimal artificial smoothening. You won't find much detail on zooming in, but daylight shots are good enough to share on social media. The depth sensor definitely makes a difference and helps capture portrait selfies that have more natural-looking depth and better dynamic range than phones with single front cameras. Edge detection is again a hit or miss, and we often saw that elements such as hair and earlobes were mistakenly blurred.

The camera app offers a few tricks such as AI beautification and AR stickers, but the former is a bit too aggressive. Face recognition struggles badly under low light, and has accuracy issues as well, but thankfully, the fingerprint sensor worked just fine. The phone can record up to 1080p videos at 30fps, but despite looking bright, the results were jerky and there was a lot of focus hunting.

The Infinix Hot 7 shines when it comes to battery longevity. Our usage involved all-day-long social media app usage, Web browsing, and a couple of hours of music playback using Bluetooth earphones, plus around 30 to 45 minutes of gaming. The Infinix phone still had around 25 to 30 percent of its power left at the end of the day.

In our HD video loop test, the phone lasted 16 hours and 36 minutes. The supplied 10W charger tops up the phone's 4,000mAh battery to 60 percent in one hour, but slows down after that and takes another hour to charge it fully.

The Infinix Hot 7 proves to be a decent phone for Rs. 7,999. It has a good display, solid build quality, and a long-lasting battery. The phone's performance and camera output are also acceptable given its price point. XOS 5.0 offers some useful features, but its bloatware and spammy notifications are annoying. It feels cluttered too, and the security patch was not up-to-date at the time of our review

If you are willing to spend an additional Rs. 500, the Redmi 7 (Review) provides much better overall value. It offers better performance, battery life, and design. The Realme C2 (Review), Realme 3i (Review), and Honor 8C (Review) are also worthy options that come at slight premiums. To sum it all up, the Infinix Hot 7 is a decent phone for its asking price, but the competition has more to offer.

Sacred Games 2 Binge Over? Try These 8 TV Shows If You Want More of the Sacred Games Flavour
Instagram Adds Tool for Users to Flag False Information