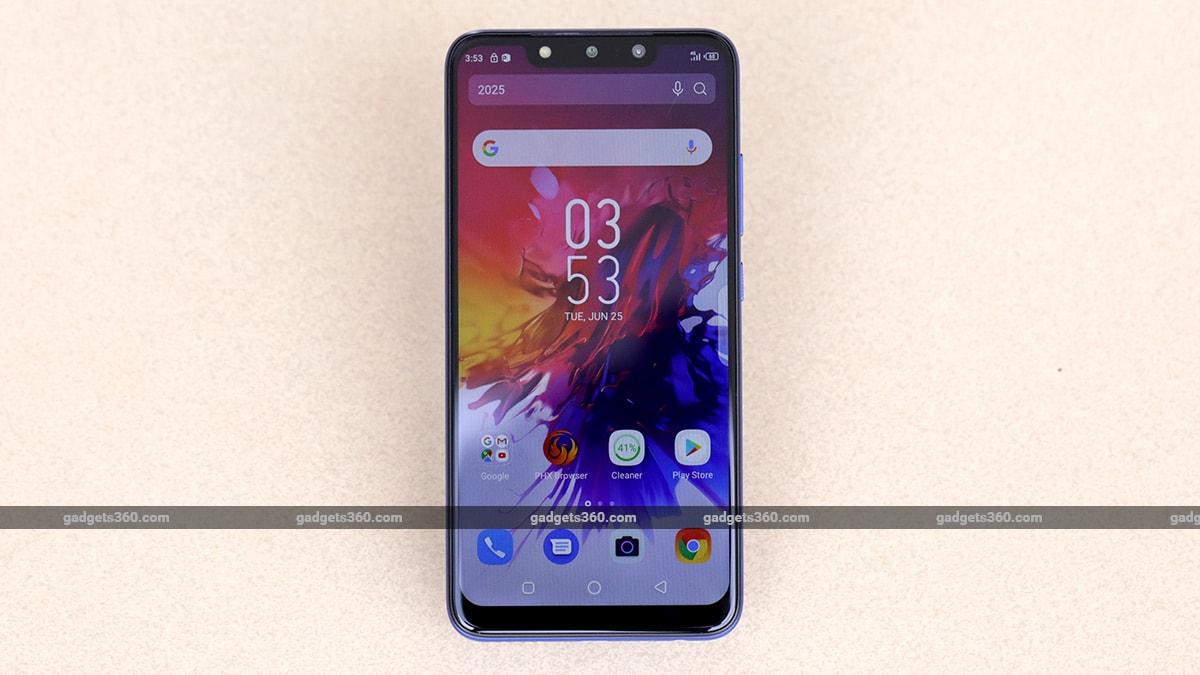 Infinix recently launched the Smart 3 Plus (Review) and the Infinix S4 (Review) in the sub-Rs. 10,000 segment. The Smart 3 Plus is among the few phones to sport a triple camera setup at its price point, while the Infinix S4 has a beautiful design. Infinix has now launched yet another smartphone in the same segment, called the Hot 7 Pro. This model packs in 6GB of RAM, which is rare at this price point. Does more RAM make a difference, or are you better off with what the competition is offering? We put the Infinix Hot 7 Pro through its paces to find out.

The Infinix Hot 7 Pro has a simple design. It sports a 6.19-inch HD+ display with a “traditional” wide notch at the front. This looks a little dated, considering that many smartphones these days have smaller waterdrop notches, though it's understandable for the budget segment.

Infinix has opted for this shape to accommodate dual selfie cameras and a selfie flash. The earpiece is wedged between the display and the frame. The borders on the sides of the screen aren't too big but the bottom chin is.

Infinix has opted for a metal back panel which gives this phone a premium look and feel. The Infinix Hot 7 Pro is available in Midnight Black, Aqua Blue, and Mocha Brown colours, and we have an Aqua Blue unit for review. Pick the phone up and you'll feel that the rounded edges and sides make it comfortable to hold.

You'll also notice that the power and volume buttons are on the right side, while the SIM tray is on the left. Infinix has used a textured power button which is easy to distinguish from the volume buttons by touch. We found the volume buttons to be positioned a little too high, needing a stretch to reach.

At the back, the Infinix Hot 7 Pro has a dual camera setup along with a single-LED flash. The module protrudes slightly but has a metal rim around it which should help keep the lenses safe from scratches. There is a fingerprint scanner at the back. It is well positioned and we found that our fingers rested on it naturally when holding the smartphone.

The Infinix Hot 7 Pro has a Micro-USB port at the bottom along with a 3.5mm headphone jack and loudspeaker grille. The top is completely blank. This smartphone packs in a 4000mAh battery and you get a 10W charger in the box.

The highlight of the Infinix Hot 7 Pro is that it packs in 6GB of RAM. It is powered by the MediaTek Helio P22 SoC, which is a relatively low-end option for a phone at this price. You get 64GB of internal storage, plus the ability to expand it using a microSD card.

The Hot 7 Pro ships with XOS 5 on top of Android 9 Pie. We found some preinstalled bloatware including Facebook, Instagram, Messenger, Flipkart, Opera News, and PHX browser and games such asJumping Zoo, Mayan Jump 2, and Danger Dash.

There's also Palmstore, an alternative app store, and AHA Games an alternate source for games. Both these apps are updated independently and not through the Google Play Store, which could be a security concern. We found a few of these apps to be spammy, and they kept pushing notifications every other hour.

The UI has a few features added on top of stock Android. It has Game Boost which claims to boost CPU performance, clear up RAM, and block incoming notifications while gaming. WhatsApp Mode allows only the messaging app to access mobile data while blocking other apps. This could be helpful if you are roaming or on a limited data plan. There is a bike mode as well, which when enabled, rejects all incoming calls and auto replies with a text. XOS also has a Freezer which freezes apps to prevent them from running in the background.

The Infinix Hot 7 Pro also has an AIBox feature which clubs potentially spammy notifications, so you don't have to deal with clutter. It also has a smart panel which has app and action shortcuts similar to the one seen on Samsung smartphones and this can be accessed from anywhere.

Yes, the Infinix Hot 7 Pro has 6GB of RAM, but thanks to the entry-level Helio P22 SoC, this phone didn't feel any more responsive than the Infinix S4 (Review). It isn't noticeably quicker when loading apps, but more RAM does help keep them running in the background so multitasking is a little snappier.

The rear-mounted fingerprint scanner as well as the face recognition feature are quick to unlock the smartphone. We found that face recognition didn't work properly in the dark. There's an option to use the front flash, but this can be blinding at night.

We ran a couple of benchmarks and we did find that the 6GB of RAM had made a bit of a difference, helping the Infinix Hot 7 Pro score higher than the Infinix S4 did. The smartphone scored 79,283 in AnTuTu, and also managed 819 and 3,864 in Geekbench's single-core and multi-core tests respectively. It scored 10,580 in 3D Mark Ice Storm Unlimited and 28fps in GFXBench T-Rex.

We played PUBG Mobile which defaulted to the Low preset, with graphics set to Smooth and the frame rate set to Medium. We did notice occasional stutters while playing the game, but the experience was marginally better than on the Infinix S4 (Review). We played PUBG Mobile for 20 minutes and noticed a 5 percent battery drop. The phone was warm to the touch even when we were playing in an air-conditioned room.

The Infinix Hot 7 Pro packs in a 4000mAh battery and delivers good battery life. With our usage, which consisted of an active WhatsApp account, running a few benchmarks, taking camera samples and using Google Maps for navigation, we ended the day with 45 percent battery left on the device. In our HD video loop test, the smartphone managed to clock 15 hours and 10 minutes.

Infinix has opted for dual cameras for the back as well as the front of this phone. Both setups have a 13-megapixel primary sensor and a 2-megapixel depth sensor. The primary rear camera sensor has an f/1.8 aperture while one in front has an f/2.0 aperture.

The camera app has AI and it could detect what it was pointed towards, though this was a bit slow at times. There are quick toggles available for HDR and the flash. The Camera app also has modes such as Beauty, Bokeh, Video, and AR Shot.

Photos taken with the Infinix Hot 7 Pro were below average. Most of the shots we took during the day were overexposed. When shooting against the light, we observed chromatic aberration in a few of our samples. HDR does very little to help with this issue, and shots taken with HDR were still slightly overexposed. Macros taken with the Hot 7 Pro were decent, but we needed to tap the screen a few times to get this phone to focus where we wanted it to.

Portraits taken using the bokeh mode showed decent edge detection, and we could set the level of blur before taking a shot. However, the bokeh effect isn't consistent, and the phone fails to apply blur on gaps between hands and the body, for example.

Low-light shots were relatively good, and the phone managed to keep noise under control. The Infinix Hot 7 Pro takes time to lock focus at night so you will need to be patient for a sharp shot.

Selfies were acceptable but the backgrounds were overexposed when we shot outdoors. You can shoot portraits using the front camera which puts the depth sensor to use and blurs out the background.

Video recording maxes out at 1080p for the primary as well as the selfie cameras. This phone lacks video stabilisation, resulting in shaky output. The phone was also slow to focus while recording video in low light.

Verdict
The Infinix Hot 7 Pro has been marketed as a phone that costs less than Rs. 10,000 and has 6GB of RAM. While it is the only new phone to sport this much RAM in this price segment, the processor is weak. You're still going to be waiting for apps to load a lot of the time, and you only get a small advantage while multitasking.

The cameras also need a few tweaks to improve performance in daylight. The Infinix Hot 7 Pro is an average phone with 6GB RAM, and you should consider other models such as the Realme 3 (Review), Redmi Note 7 (Review), or the Asus Zenfone Max Pro M2 (Review) instead.

Lenovo ThinkPad Laptops Now Fully Customisable in India via Lenovo.com, Other Models to be Included Soon
New Zealand vs Pakistan Live Stream: How to Watch Cricket World Cup 2019 Telecast on Mobile and PC