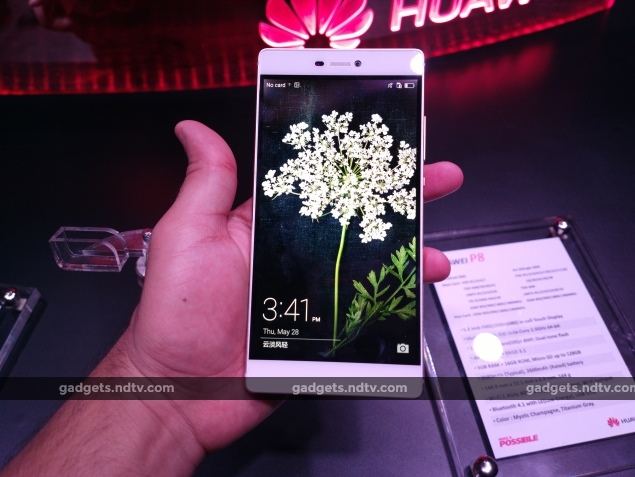 The Huawei P8 series of smartphones was first unveiled in April, and over a month later we're still to see the phones in India. However, it seems as though Huawei will soon launch the devices in India, because NDTV Gadgets was invited to a large-scale product unveiling event for the South East Asia region.

The range of products unveiled at the event in Bangkok included the flagship Huawei P8, P8max and P8lite, as well as the MediaPad X2 tablet and Talkband B2 fitness band. We managed to score some hands-on time with the new devices. 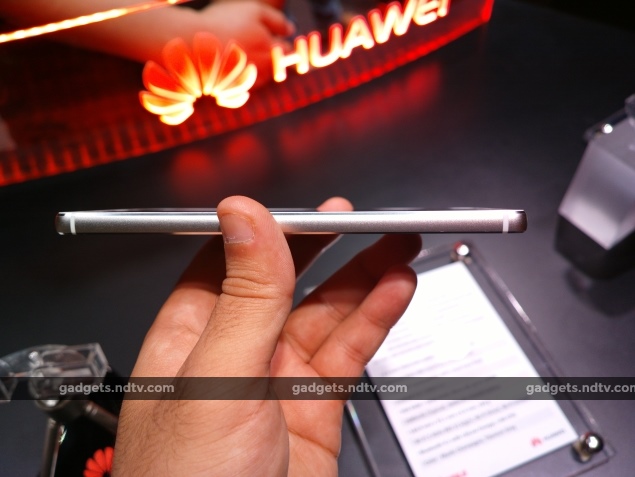 Huawei P8
The company's new flagship features a 5.2-inch Full-HD display, with a 78.3% screen-to-body ratio. The screen occupying such a huge chunk of space on the front looks fantastic, as does the rest of the device. It's also just 6.4mm thick, so it retains the sleekness of last year's P7. The power and volume buttons and the SIM trays are placed along the right of the device. The P8 is a dual-SIM smartphone, although the second SIM slot doubles up as the storage expansion slot. This essentially means that you have to choose between extra storage and a second SIM card, which we found a bit limiting. Internal storage is only 16GB, so you will likely find yourself needing to add a microSD card and forgo the dual-SIM functionality as a result.

The Huawei P8 runs on Android 5.0 with the company's Emotion UI layered on top. Like a lot of user interfaces from other Chinese brands, Emotion does away with the app drawer, instead piling all icons onto the home screens. This looks a bit cluttered, but with a bit of organising, you can make it neat and orderly. It's zippy to use and beautiful to look at, with an understated elegance. The screen itself is also brilliantly sharp and detailed. 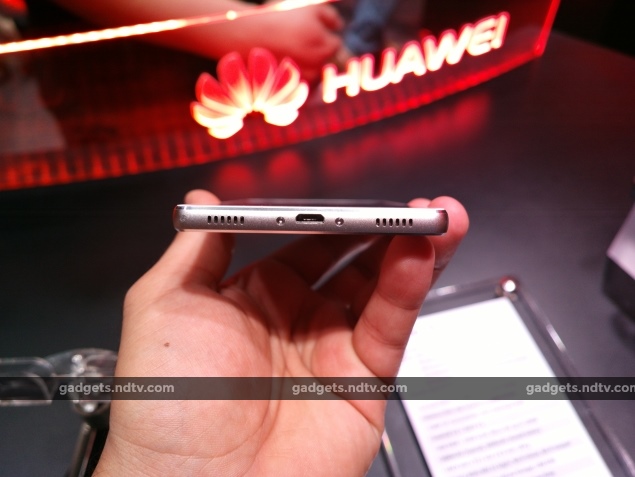 The rear has a 13-megapixel sensor, while the front camera is an 8-megapixel affair. The company claims that there have been some software-based improvements since the previous P7. The camera was decent enough in our limited time with it, capturing a good amount of detail in both good and low light. There is also a fair bit of post-processing taking place, which attempts to sharpen and adjust the picture right after you've taken it. While pictures are good, we feel they don't really stand out. If you just need the phone for occasional shooting, it should be fine. If you're a photographer or enthusiast, you won't be too impressed.

The speakers of the phone are placed along the bottom edge. They don't really compare to the dual-speaker configuration on some of the HTC One series devices, but sound is decent nonetheless. The battery is rated at 2,600mAh. On the whole, the Huawei P8 is an interesting device that looks like it will be great to use, but we'll save that judgement for our full review. 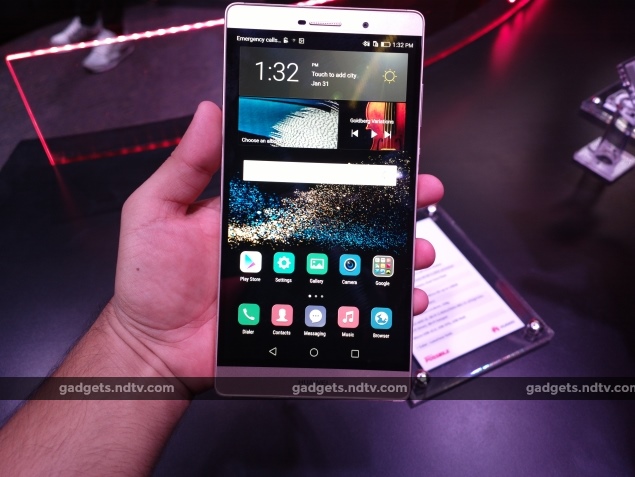 Huawei P8max and Huawei P8lite
Apart from the flagship P8, Huawei also launched two variants called the P8max and P8lite. The P8Max is essentially the same device with a much larger 6.8-inch screen, 64GB of internal storage, and a 4,360mAh battery. This is a huge device that stretches the bounds of even the phablet category. It's identical to the P8 in all other ways, with the look and feel, performance and user interface being the same.

The P8lite is a smaller, more affordable variant of the P8. Key differences between this and the P8 are its 5-inch 720x1280 pixel display, 5-megapixel front camera, lower-end Kirin 620 SoC, and 2,200mAh battery. This device is intended to be Huawei's mid-range offering and will be priced competitively to take on similar smartphones from Samsung, HTC and Lenovo, among others. 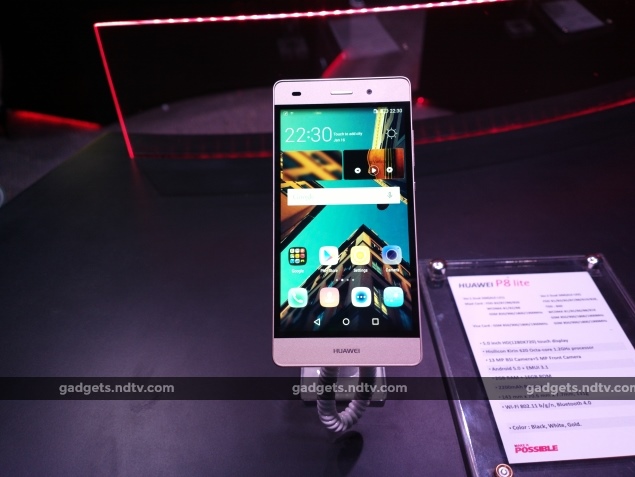 Huawei Talkband B2
Huawei also announced the launch of the Talkband B2 wearable device at the event. This is a fitness-tracker-cum-smartwatch that pairs with any smartphone running Android 4.0 and above or iOS 7.0 and above. It tracks your activity, calorie consumption, and sleep. It even pushes notifications from a connected smartphone to the PMOLED touch screen. A unique feature of the device is that the core device can be detached from its wrist strap and used as a Bluetooth headset for calls and audio. The Talkband B2 looks great, and its strap felt comfortable in the time we spent wearing it. 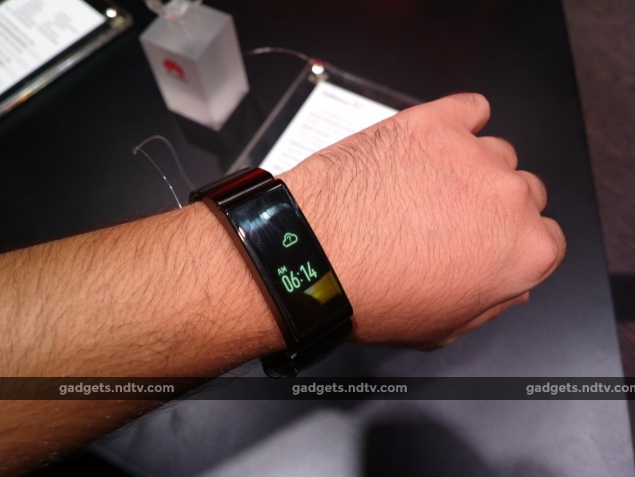 The range of Huawei devices launched here is slated to be made available in India in the third quarter of 2015, and pricing will be revealed at that time. The P8 is expected to cost around Rs. 30,000, which means that Huawei will be avoiding the price fight taking place between some of the other Chinese manufacturers and positioning this device as a premium option. We look forward to bringing you full reviews of all these products.

Disclosure: The correspondent's flights and hotel in Bangkok were sponsored by Huawei.

Android Wear to Get Always-on Apps, Wrist Gestures, and More; Now With Over 4,000 Apps
Google Photos With Free, Unlimited Storage: 10 Things You Need to Know