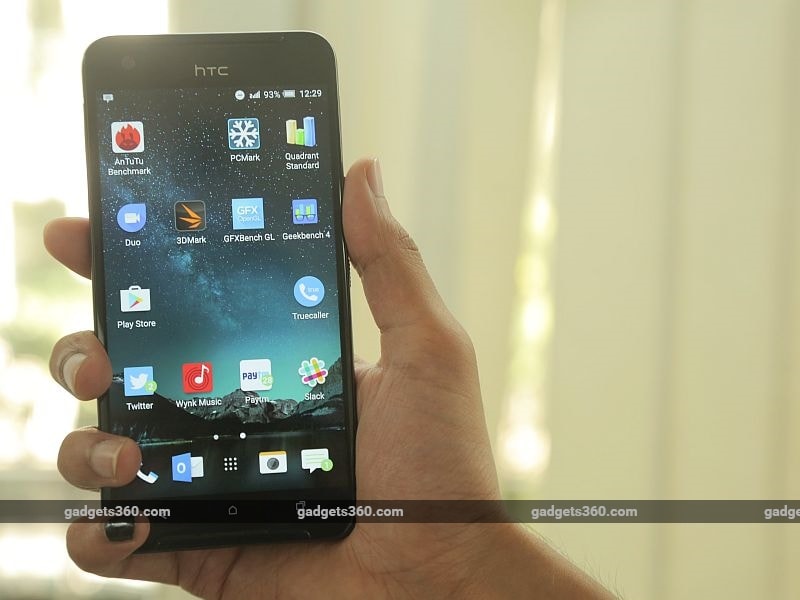 HTC has been able to do well in the premium segment with its One series of Android smartphones, and more recently with the HTC 10, which also scored well in our review. The Taiwanese company has, however, faced stiff challenges in the mid-range segment from the likes of OnePlus, Xiaomi, and Oppo.

HTC earlier this year focused its energies towards the mid-range segment with its metal-clad HTC One A9 smartphone, which was quite well received. Now, the company is trying to repeat that success with the more affordable HTC One X9, which also has a metal body and offers impressive specifications under the hood. Will it be able to match the likes of the Le Max 2 and Xiaomi Mi 5? We try to find out in our review.

HTC One X9 design and build
When seen from a distance, the front of the HTC One X9 seems more in line with the company's Desire range. Fortunately, the similarity ends there. The One X9 has an all-metal rear that looks more impressive and makes it very clear that the handset is meant to be a little more premium.

The front is dominated by glass that curves around the edges. We get the three backlit capacitive buttons below the display for Back, Home, and Recent. HTC branding can be seen above the display, with the front camera to one side. HTC confirms that it has used Corning Gorilla Glass for the front. The dual speaker grilles at the top and bottom of the front panel are well designed and add to the phone's looks.

The rear panel has antenna bands running across the top and bottom, while the camera and dual LED flash can be seen in the top left corner. There's also more HTC branding in the middle.

The power and volume buttons are on the right along with a SIM card slot, while the left has another slot where the second Nano-SIM and microSD card can be inserted. There's a 3.5mm audio jack on top, while the Micro-USB port is on the bottom.

The One X9 features a 5.5-inch full-HD (1080x1920 pixels) Super LCD display with a density of 401ppi. We found the display to be bright and crisp. Colour reproduction is decent with good black levels and acceptable sunlight legibility. The dual HTC BoomSound speakers and Dolby Audio Surround enhancement made watching videos and playing games enjoyable.

At 7.99mm, the One X9 is thin for phones with screens this size, and its rounded sides make it easy to hold and use with one hand. It is however slightly heavy at 170 grams and the metal back gets slippery especially if your hands start getting sweaty. This phone will be available in Carbon Grey, which we received for review, and Opal Silver. Overall, the HTC One X9 feels premium for its price and is well designed with no unnecessary additions.

HTC One X9 specifications and software
The HTC One X9 is powered by an octa-core MediaTek Helio X10 processor coupled with 3GB of RAM. There is 32GB of inbuilt storage which is expandable by up to 2TB using a microSD card. There is a 13-megapixel rear camera and a 5-megapixel camera at the front. The One X9 supports Bluetooth 4.2, Wi-Fi 802.11 a/b/g/n/ac, GPS, Glonass, Miracast, and 4G LTE Cat. 4 with download speeds of up to 150Mbps and upload speeds of up to 50Mbps. It supports FDD Band 3 and 5 as well as TDD Band 40. There is a 3000mAh battery with quick charging support.

The HTC One X9 runs the company's Sense UI on top of Android 6.0 Marshmallow. This version of Sense UI feels very light compared to previous HTC phones launched even a year ago. There is less bloatware and HTC has focused on Google's suite of apps such as Search, Drive, Photos, Hangouts, and Chrome. Even the Quick Settings toggles sport a more stock Android feel. There is a Themes app for tweaking and downloading new themes, wallpapers, and ringtones from HTC.

The Zoe video editor is present and lets people edit recorded videos. You can choose whether or not to use the BlinkFeed news reader on the home screen. We noticed Marshmallow features such as Now on Tap and app permissions. Overall, the HTC One X9 felt easy to use with the new Sense UI being very user friendly and fluid. It definitely felt less cluttered than the skins that other manufacturers such as Oppo and Huawei ship their phones with.

HTC One X9 performance
Powered by the Helio X10 SoC, the One X9 handled multitasking with ease. Games such as Need for Speed: No Limits and Dead Trigger 2 ran well and there was no noticeable lag. The handset tends to get warm after long gaming sessions, but not beyond usual limits.

We however noticed slight delays when launching apps at times, which felt odd. During the course of our review, we also experienced occasional app crashes which was disappointing for a phone at this price. The handset was able to hold on to 4G networks without issues, and calls were clear.

We liked the BoomSound speakers on the One X9 which offered up crisp sound. The bundled earphones were okay, with decent bass delivery.

The HTC One X9 impressed us with its benchmark scores. It achieved 59,661 in AnTuTu and of 24,247 in Quadrant. In GFXBench's T-Rex On Screen test, the HTC One X9 managed a framerate of 26fps which is considerably higher than the HTC One A9 which managed 17fps in the same test. The phone also got a score of 4,462 in 3DMark Ice Storm Unlimited.

The 13-megapixel rear camera on the One X9 has a BSI sensor, optical image stabilisation (OIS), an f/2.0 aperture, and a dual-tone LED flash. One of its biggest highlights is its ability to record videos at 4K at 30fps. The camera app also offers a Pro mode that offers manual controls and lets you take images in RAW format. There's a Selfie timer that allows a 10-second delay. Other features include HDR mode, Panorama mode (up to 270 degrees), continuous shooting, hyperlapse, and slow motion video recording at 120 fps. As with other HTC phones, the volume buttons act as zoom buttons.

The camera was quick to focus, but there was noticeable shutter lag. Photos taken under well-lit conditions usually came out crisp with neutral colours, though some were slightly blurry. The face detection function worked well. In low light, performance was disappointing, and we could see noise throughout in images. The front 5-megapixel camera took some respectable selfies, but this isn't the best performance we've seen at this price level.

The HTC One X9 ran for 10 hours and 45 minutes in our video loop test, which is decent for a phone with a battery of this size. Performance in ordinary usage however was a bit below par, as the phone was unable to give us an entire day of battery life.

With light usage, the phone gave us around 12 to 14 hours of runtime before the battery dipped below 20 percent and we had switch to a power saving mode. We were especially disappointed with battery performance when using apps like Google Maps. Quick charging support came in handy a lot of times. The One X9 took slightly over two hours to charge fully, which is not bad.

Verdict
The HTC One X9 was launched in India back in May at a price of Rs. 25,990, but only went on sale in July and is currently available for around Rs. 23,990. This phone's metal body and good display performance make for a good package. However, the camera and battery life are disappointing and, overall, it isn't very easy to recommend the X9 with more powerful competition like the Xiaomi Mi 5 and Le Max 2 at around the same price point.