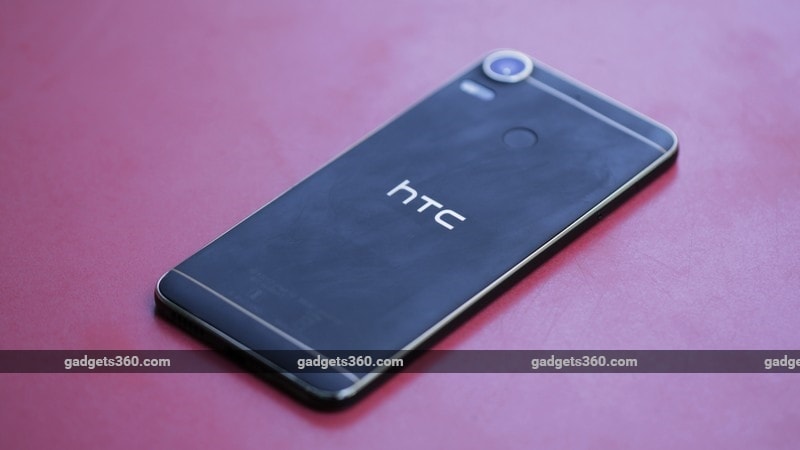 The Desire 10 Pro is HTC’s latest mid-range smartphone, focusing mainly on design and camera quality. The company launched this phone back in November of last year, but it only went on sale in December.

Sitting pretty at Rs. 26,490, the Desire 10 Pro goes up against the likes of the Moto Z Play (Review), Asus ZenFone 3 (ZE552KL) (Review) and OnePlus 3 and 3T. All of these are excellent smartphones in our book, which means the Desire 10 Pro needs to have more than just a fancy design for it to be worth recommending. Let's see if can deliver the goods.

HTC has been at the top of its game in recent times when it comes to build quality, and that shows here as well. The Desire 10 Pro has a metal body, which feels great when you hold it, also offers a good amount of grip. There are gold accents running along the edges, camera bump and back that give this phone a very striking look. The ‘Stone Black’ colour option that we received features a rubberised texture for the back, which certainly helps with grip, but also easily attracts scuff marks, some of which refuse to go away. We’re unsure if the other colour trims also have this issue, but if you have your eyes set on the black version then you might want to use a case.

HTC has fitted the Desire 10 Pro with a quality display. The 5.5-inch IPS panel produces good levels of brightness with good colours and contrast. The full-HD resolution ensures a decently high pixel count so there’s no visible pixellation of icons and text. There’s Gorilla Glass for added protection too. The display is tuned for a neutral tone by default but you can adjust the colour temperature in the Settings app if needed. The space above the display is a bit taller than the portion below, which makes the phone a bit longer than it should be. The capacitive buttons on the chin of the phone are backlit and responsive.

The power and volume buttons are on the right and have good tactile feedback. The power button also gets some ridges so it’s easily identifiable. On the left of the HTC Desire 10 Pro, you have the hybrid SIM slot that can accommodate two Nano-SIM cards or a Nano-SIM and a microSD card (up to 2TB) to expand the phone's storage. There’s a headphones socket on the top, and a Micro-USB port and speaker grille on the bottom The Desire 10 Pro has a visible camera bump around the back, followed by the LED flash and laser autofocus window just below it. There's also a fingerprint sensor around the back, which is quick at authentication and can double up as a button for snapping a selfie. We’re a little disappointed at the absence of a USB Type-C port here. Another disappointment is the lack of stereo speakers, so HTC's BoomSound enhancement only works with headphones.

The Desire 10 Pro ships with a 10W adapter, data cable, and headset. The quality of the bundled accessories is fairly good. Overall, the phone makes a very good first impression thanks to its unique design and superb build quality except for the fact that some of the scuffs and abrasions on the back which result from everyday use are impossible to clean.

Under the hood, the HTC Desire 10 Pro packs an octa-core MediaTek Helio P10 SoC, 4GB of RAM, and 64GB of storage. These core specifications look solid, and for all intents and purposes, they get the job done. However, when comparing performance in benchmarks to that of other phones in this price band, the Desire 10 Pro doesn't fare very well. The Helio P10 SoC is weaker than a Snapdragon 625, which is evident from the Desire 10 Pro's AnTuTu score of 55,187 and 3DMark Ice Storm unlimited score of 11,163. The Mali T-860 falls a bit short on performance in gaming benchmarks with a score of 18fps in GFXbench, versus an average of 28fps for phones using the Qualcomm chip.

Other specifications of the HTC Desire 10 Pro include Bluetooth 4.2, dual-band Wi-Fi b/g/n, FM radio, USB-OTG, and GPS. NFC and Wi-Fi are notably absent. The phone packs in the usual suite of sensors including a gyroscope. 4G with VoLTE is supported on both SIM slots.

The Desire 10 Pro runs a lean version of HTC Sense on top of Android 6.0 Marshmallow, just like the HTC 10 (Review). To avoid duplication of apps that serve the same purposes, HTC has used Google’s apps wherever possible, like Photos for the gallery and Play Music for the music player. The dialler and contacts apps have been cleaned up a bit, and there are some native HTC apps like Weather, Flashlight, and Boost+. The latter lets you manage permissions, clean junk files, and lock apps with the fingerprint scanner.

Some third-party apps are pre-installed, such as News Republic, Hungama, Under Armor Record, Facebook, and Instagram. There’s also a Themes app for changing the look of the UI.

The Desire 10 Pro takes a hit in benchmarks but in the real world, it does alright. Average RAM usage is generally about 2GB, leaving you with plenty to spare. We barely noticed any slowdowns or stutters during our usage either. One thing we really liked is the fact that this phone barely gets hot, even when performing stressful tasks like shooting videos or gaming. Heavy games like Asphalt 8 run just fine too. The phone is also slim and fairly light, so it’s easy to live with.

The mono speaker on the HTC Desire 10 Pro does a good job with alerts, and sound is loud and distinct. The experience is not the best with media files but then that’s expected. Audio through the bundled headphones is good, and gets better with BoomSound enabled.

Images captured with the rear camera exhibit good detail and colours. Objects in focus have good sharpness and we didn’t encounter much chromatic aberration either. We found the camera struggling a bit with close-up shots - at times, it would refuse to lock onto subjects, making it quite frustrating to shoot them. Low-light shots are also handled well with fair bit of detail preserved and not much colour noise. Once again, close-ups taken with the HTC Desire 10 Pro were a bit of a struggle to get right.

The camera app also has a ‘Pro’ mode with the ability to shoot in RAW and save the manual settings to three custom profiles, which is a nice addition. Other shooting modes on the HTC Desire 10 Pro include panorama and Zoe camera which captures short video clips. Video recording only goes up to 1080p and the quality is good. The front camera manages detailed selfies, and in low-light, the ‘Retina flash’ feature does come in handy. You can also take a selfie panorama if you’re with a group of friends.

The non-removable 3000mAh battery on the HTC Desire 10 Pro will last you through nearly an entire day of regular use. We were able to to a little more than a full day on a single charge. In our HD video loop battery test, we got a runtime of 10 hours and 50 minutes. The HTC Desire 10 Pro supports fast charging too, and the bundled adapter is rated at 10W.

Verdict
The HTC Desire 10 Pro is a good device but at Rs. 26,470, its pricing is on the higher side, which makes us think twice before recommending it. The SoC is not the best when you consider other Android smartphones around this segment that pack faster ones, and this phone also misses out on some conveniences like a Type-C USB connector, NFC, and Wi-Fi 802.11ac.

This phone would be worth considering at around Rs. 20,000, and paying anything more is a big ask. The Moto Z Play and Asus ZenFone 3 (ZE552KL) both offer better value for a bit less. On the other hand, if you want something more future-proof, you could spend a bit more and get the OnePlus 3 or OnePlus 3T, whichever fits your budget. However, if you've considered all the competition and still really like the Desire 10 Pro looks you can pick it up from HTC India’s online store.