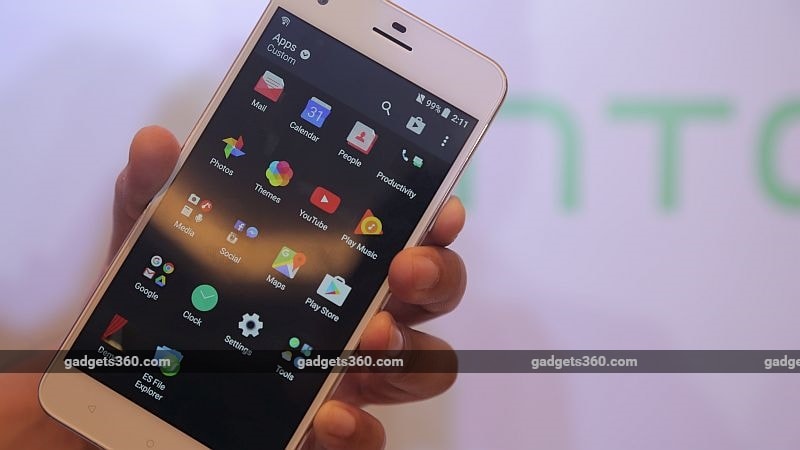 HTC Desire 10 Pro, launched on Thursday alongside the HTC 10 evo, is the latest entrant in the sub-Rs 30,000 segment, competing against the popular OnePlus 3 and Moto Z Play. The HTC Desire 10 Pro's highlight is its 20-megapixel camera, water- and dust-resistant body, and attractive design, but will that be enough to take the market share from other top smartphones in the mid-range segment of the Indian smartphone industry? Read our HTC Desire 10 Pro first impressions to find out.

The new HTC Desire 10 Pro - priced at Rs. 26,490 - is a slightly bumped-up version of the HTC Desire 10 Lifestyle, which was launched in India back in September. At the Desire 10 Pro launch event on Thursday, Faisal Siddiqui, President, HTC South Asia, confirmed that the company is not looking to take on Chinese competitors in the low-cost segment. Instead, Siddiqui stated that HTC plans to compete in price bands where it's more popular and has good traction already.

Among the highlights of the HTC Desire 10 Pro is its design. With a matte-finish body and metallic gold accents, the Desire 10 Pro model has its own unique style. When seen from a distance, the model looks like any other Desire smartphone but that feeling ends as soon as you hold it in your hands. Desire 10 Pro will be available in Valentine Lux, Stone Black, Royal Blue, and Polar White colours in India.

The HTC Desire 10 Pro felt sturdy and was easy to grip with just one hand despite its sizeable 5.5-inch screen. There are also capacitive navigation buttons, a front camera, and various sensors on the front. The power and volume buttons are on the right, while the dual Nano-SIM card slots as well as microSD card slot are on the left. At 7.8mm thick, the Desire 10 Pro is sleek enough for everyday usage, though at 165 grams, it might feel slightly too heavy to some.

The 5.5-inch full-HD IPS display of the HTC Desire 10 Pro is bright and looks good. We found legibility to be decent in direct sunlight, while viewing angles were good too. There's Corning Gorilla Glass for protection from scratches. The Desire 10 Pro packs BoomSound stereo speakers which makes it a great device for multimedia usage. In the short time we were able to spend with the device, we found that the speakers were loud enough for a small room.

The HTC Desire 10 Pro runs on Android 6.0 Marshmallow with HTC's Sense UI on top. The company has definitely streamlined its skin and it felt light. This phone is powered by a 3000mAh battery. Under the hood, there is a 1.8GHz octa-core MediaTek Helio P10 processor.

On the camera front, there's a 20-megapixel rear camera with laser autofocus, a BSI sensor, an f/2.2 aperture lens, and Auto HDR mode. There's also a 13-megapixel front-facing camera with the same features plus a selfie panorama mode. Some of the test shots we took in artificial light looked decent, with good amounts of detail and colour accuracy. Due to the nature of the event, we couldn't check all the camera modes on the HTC Desire 10 Pro, but you can look forward to them in our full review.

Along with the Desire 10 Pro, the company also announced that the HTC 10 evo, the international version of the Sprint-exclusive HTC Bolt, will be launched in India in December. The HTC 10 evo looks and feels very premium. It has a full-metal unibody and looks almost identical to the HTC 10. There are some minor changes such as the placement of the front camera, sensors, and LED flash. Much like the HTC 10, the evo also has a fingerprint scanner embedded into the home button. This is HTC's first offering without a headphone jack, and so it is bundled with USB Type C headphones.

Holding the HTC 10 evo in hands will give you a feeling of sturdiness, while its IP57 rating for water, splash and dust resistance gives it an advantage in terms of durability. There's also Corning Gorilla Glass 5 over the screen. An HTC executive at the event claimed that the 10 evo has been tested in various conditions for drop, bend, scratch, submersion, as well as corrosion resistance. At 174 grams, the HTC 10 evo is definitely heavier than the HTC 10 which weighs 161 grams. The new model, however, is sleek, with an 8mm thickness while HTC 10 measures 9mm.

This phone's 5.5-inch QHD Super LCD 3 display is easily one of its biggest selling points. In our time with the 10 evo, we found that it was bright and had good black levels. Text looked sharp and crisp, and watching videos or playing games on the 10 evo should be a treat.

The HTC 10 evo will be the company's first Android 7.0 Nougat smartphone in India. We couldn't check all the new Nougat features on the evo, but we did notice an all-new Quick Settings menu which is now divided in two pages of toggles. There's also a revamped Settings app which shows all top-level sections as a menu which you can show by tapping an icon or swiping right. It's interesting to see that HTC hasn't ditched all its Sense UI features with the introduction of Nougat. As with other smartphones running Nougat, the HTC 10 evo offers free unlimited photo storage with Google Photos, and the Google Duo video calling app preinstalled.

The HTC 10 evo sports a 16-megapixel rear camera and comes with features like OIS (optical image stabilisation), 4K video recording, and PDAF (phase detection autofocus). There is an 8-megapixel front-facing camera, and the smartphone also supports screen flash. The camera on 10 evo was quick to lock focus when we tried it. Shots taken under artificial lighting looked crisp, and we were impressed that it was able to take some great low-light shots with good amount of detail in a very dark room. The 8-megapixel front camera also captured decent selfies.

One of the biggest surprises about the HTC 10 evo is HTC's choice of SoC, the dated Qualcomm Snapdragon 810, which was considered responsible for heating issues with many smartphones. The 10 evo also has 3GB of RAM, and 32GB of inbuilt storage which is expandable via microSD card (up to 2TB). The battery has a capacity of 3200mAh.

In the time we spent with the HTC Desire 10 Pro and HTC 10 evo, we found that both smartphones were responsive to touch inputs and quick enough during multitasking. Stay tuned for when we put these phones through their paces for a detailed review.

Final thoughts
The HTC Desire 10 Pro has been priced at Rs. 26,490 (MOP), and will be available across all channels from December 15 in India. At this price point, it will go up against the likes of the OnePlus 3, Asus ZenFone 3 and Huawei Honor 8, which are all priced at around the same level. Unfortunately, HTC hasn't announced pricing for the HTC 10 evo, and in our opinion, this will be the key factor in deciding this product's fate in the market. Considering that it uses the nearly-two-year-old Snapdragon 810 processor (with some updates), we hope that pricing will be competitive.