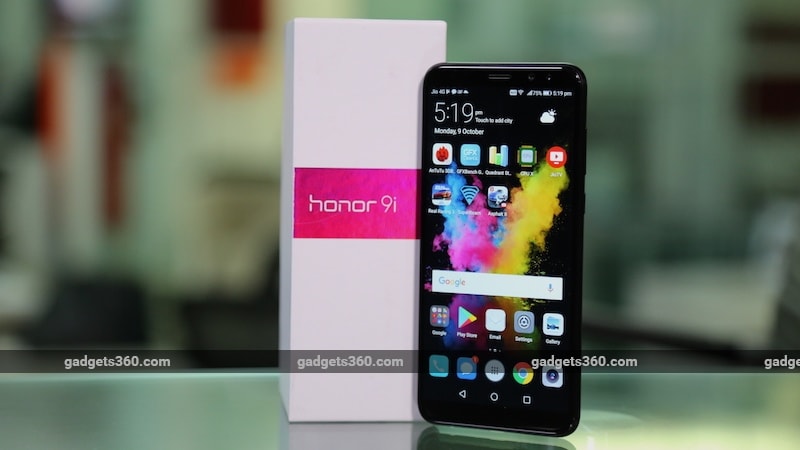 Huawei’s sub-brand Honor has been dishing out some good phones recently. The Honor 8 Pro (Review) which launched earlier this year went head-to-head with the OnePlus 5 (Review) stealing its thunder to some extent. We were impressed with the specs and features it offered for the price. With the market slowly pivoting towards 18:9 displays, Honor has made that move in the form of the Honor 9i. The screen isn’t the only interesting thing about this new phone. It also sports four cameras making it quite unique. While the specifications look good on paper, do they translate into a good real-world experience? We've got the answer.

If you have been tempted by phones with huge displays and thin bezels, the Honor 9i will pique your interest. It packs a huge 5.9-inch display with slim borders all around. Don’t let the screen size put you off, since the 18:9 aspect ratio means that the phone overall is roughly the same size as most current 5.5-inch phones. The big display means that the metal earpiece, sensors, and front cameras have been pushed right to the upper edge. The fingerprint scanner is at the back and you get a clean front face.

Pick the phone up, and the curved sides and edges feel comfortable in hand. The Honor 9i feels solid too, thanks to its metal unibody. While the black finish on our review unit looks gorgeous, it is a fingerprint magnet. The phone is also a little slippery if you aren’t careful when holding it. The dual camera module on the back protrudes by a couple of millimeters but has a metal rim surrounding it, which should help prevent scratches. Honor has lined up the LED flash, cameras, and fingerprint scanner down the center of the phone. We found that we needed to stretch our fingers a little to reach the fingerprint scanner and that a slightly lower positioning would have been better.

The Honor 9i has a Micro-USB port for charging and data transfers, with a 3.5mm headphone jack and the loudspeaker on either side. Honor ships the phone with a 10W charger in the box, a pair of earphones, and a plastic case to use the phone with.

Honor 9i specifications and software

The first thing to grab your attention on the Honor 9i will be its big display. It sports a 5.9-inch FullView screen with an 18:9 aspect ratio and FHD+ resolution (1080x2160 pixels). Viewing angles are good but we would have liked a little more vividness in the colours. You can change the colour temperature but we couldn’t find a way to boost contrast. The display is bright enough indoors but you might struggle with it when outdoors. There is no mention of any sort of protective glass, but you get a plastic scratch prevention film pre-installed.

The next things you'll notice are its four cameras. Honor has used dual camera setups on both sides. The primary rear and front cameras have 16-megapixel camera and 13-megapixel sensors respectively, and both are paired with 2-megapixel secondary sensors which are used to capture depth information and to enable portrait mode. You get a single LED flash at the back and a soft selfie flash on the front.

In terms of hardware, the Honor 9i is powered by a Huawei Kirin 659 SoC, which has eight ARM Cortex-A53 cores - four cores are clocked at 1.7GHz and the other four cores at 2.36GHz. There is 4GB of RAM and 64GB of internal storage which is expandable thanks to the hybrid dual-SIM slot. This is a dual-SIM device with two Nano-SIM slots, but you can swap the second SIM for a microSD card of up to 128GB. Honor has also packed in a 3340mAh battery which is a little bigger than average.

Honor has used its tried and tested custom interface called EMUI on the Honor 9i. You get EMUI 5.1 on top of Android Nougat. Huawei uses its own visual style and has rearranged a few options in the Settings app, but it won’t take much time to get used to. There are gestures that simplify taking screenshots and launching apps. Honor calls these knuckle gestures, and they work by knocking on the screen. You can double-knock to take a screenshot or do a two-knuckle tap to start screen recording. You also have the option to launch apps and enter split-screen mode by tracing letters on the screen. We found some of these quite useful during our review period.

The FullView display isn’t very convenient for one-handed use, and the top corners are hard to reach. Honor has also integrated a single-hand mode that shrinks the display down to one corner of the screen. You need to swipe across the navigation buttons to enable it. One other issue with the 18:9 display is that all apps aren’t ready for it yet. While you can run these apps with a black bar at the bottom, Honor also gives you the option to scale them to fit the screen. You get a simple prompt to enable this or you can do it in the display settings.

There's also quite a bit of bloatware. The Honor 9i has a few custom apps including HiCare - a service support app; HiGame - a gaming app store; plus Hi Honor and Honor Community which are Web shortcuts. EMUI has support for themes which gives you the ability to change the look of the device.

The performance of the Honor 9i is in the same range as that of other devices at this price point. The phone managed to clock 60,550 in AnTuTu, and 914 and 3460 in Geekbench 4's single-core and multi-core test respectively. The phone does not heat up when running day-to-day tasks but it does get warm after gaming for a while. You will enjoy playing games and watching movies on the big screen. We played Real Racing 3, Prime Peaks, and Clash Royale to test how the Honor 9i fares. While Real Racing 3 and Prime Peaks functioned normally, Clash Royale ran zoomed in, resulting in the sides getting cropped. We couldn’t find a way to run the game letterboxed to 16:9 and had to get used to it.

We also observed a higher rate of battery drain when gaming so you might want to keep an eye on the charge level. When you aren’t running processor-intensive tasks the phone manages power quite well. With light to medium use the Honor 9i lasted us one working day, but playing games and watching videos has a significant impact on battery life. In our HD video loop test, the phone lasted for 8 hours and 54 minutes which isn’t great compared to other smartphones. You can use the power saver mode which aggressively shuts down background processes and cuts off background syncing, but there is no support for fast charging, which is disappointing.

The biggest feature for the Honor 9i is its cameras. Launch the camera app and you get a simple interface with the photo/ video selector on one side and quick toggles on the other. You get controls for the flash, aperture mode, moving picture mode, and portrait mode. Moving pictures are similar to live photos on iOS, where a short clip is captured along with a still frame. You can swipe right from the default screen to access the different shooting modes. Apart from HDR, panorama, and video, you get pro modes for both photos and videos, slow-mo, filters, effects and a few others. You also have the option to download more modes if you wish to. Pro mode lets you adjust different parameters like ISO, shutter speed, exposure, focus and white balance. You also have the option to shoot in RAW.

The default auto mode for photos is good enough and sets the cameras up well. The 16-megapixel primary rear camera captures decent amount of detail in landscapes and macros. The secondary 2-megapixel camera does help separate the subject and background to some extent in portrait and wide aperture modes, but it is mostly software doing the blurring which is evident in a few shots. Selfies have the bokeh effect as well, and we found that the front cameras did a slightly better job compared to the rear ones. You get beautification mode as well, which smoothens skin.

Low-light camera performance is average. The Honor 9i manages to keep noise under control but oversharpens photos causing them to lose out on detail. Low-light selfies turn out better thanks to the diffused selfie flash. The Honor 9i can record video at 1080p, both in front and at the back. You can also use beautification when recording video with the front camera, but then the output is restricted to 720p.

We can see that manufacturers are moving towards the 18:9 aspect ratio and this feature isn't restricted to expensive flagships anymore. With the Honor 9i, buyers have one more option for an affordable yet futuristic-looking phone.

The Honor 9i strikes a balance between cost and features. You get a fingerprint scanner that was missing on the LG Q6 (Review) and a 1080p display compared to the 720p panel on the Vivo V7+ (Review). The processor is good enough for most people's daily grinds, and the software is easy to use. However, this phone still needed a few improvements when it comes to the cameras and battery performance.

If you prioritise looks over performance then the Honor 9i does offer more bang for the buck than other smartphones. On the other hand, if you want a steady all-rounder instead, the Xiaomi Mi A1 (Review) and the Moto G5S Plus (Review) are good alternatives.

Honor 9i in pictures