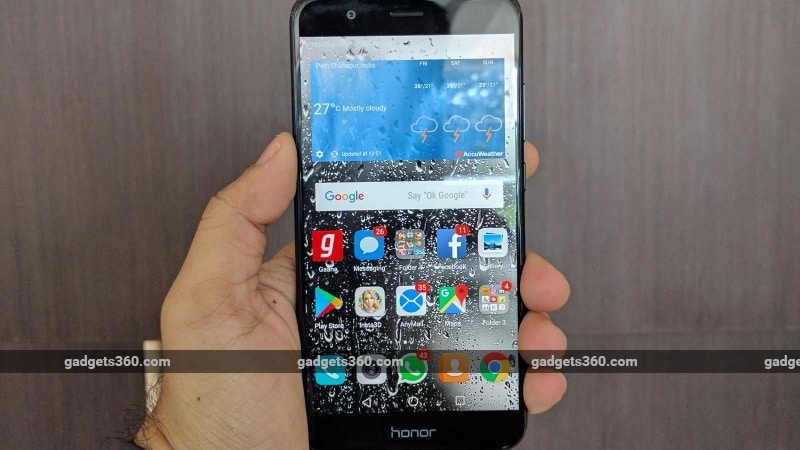 Honor recently announced the Honor 8 Pro in India as the latest addition to its portfolio. The 8 Pro, like its name suggests, will be positioned higher than the Honor 8. While there is no confirmed launch date in sight, Honor has hinted at an early July release for this smartphone. The price of this phone isn’t known either, but if rumours are to be believed, it might be priced around Rs. 32,999 rivalling the recently launched OnePlus 5 (Review). So is there anything that makes the Honor 8 Pro special? Here are our first impressions.

The Honor 8 Pro sports a new design compared to the Honor 8 (Review) and the budget friendly Honor 8 Lite (Review). Its metal unibody measures 6.97mm in thickness and has rounded edges. While it isn’t the thinnest phone around, it's still surprisingly slim considering it packs a 4000mAh battery inside. The screen measures 5.7 inches and has thin borders on the sides to make the phone easier to hold. The Honor 8 Pro has Gorilla Glass 3 protection, and like most phones these days it has rounded edges. The QHD resolution makes it quite dense, at 515PPI.

Just above the screen is an 8-megapixel front-facing camera and a slightly recessed metal earpiece. Unlike the similar-sized Huawei Nexus 6P (Review), the Honor 8 Pro misses out on front-facing stereo speakers and has to do with a single one on the bottom. Next to the loudspeaker is a USB Type-C charging port, a 3.5mm headphone jack, and a microphone. On top, the Honor 8 Pro sports a secondary microphone and an IR emitter which can be used to control appliances such as TVs and ACs. It is quite rare to see this feature in a smartphone today, and you might find it to be useful.

The Honor 8 Pro has dual 12-megapixel cameras at the back, without a camera bump. The cameras sit flush with the body, with a protective glass covering. Just like the Huawei P9 (Review), the Honor 8 Pro has one RGB sensor and one monochrome sensor, but without the Leica branding this time. Honor states that the monochrome sensor captures more light and helps make shots look crisper. Below the two lenses is a recessed fingerprint scanner. The metal unibody makes the phone premium but the smooth finish also makes it a little slippery when holding it. The left side of the phone is pretty much plain and only has the SIM tray.

Powering the phone is a Kirin 960 processor which is made by Huawei itself, along with 6GB of RAM. The phone gets 128GB of storage which is expandable using the hybrid SIM slot. The Honor 8 Pro can work with either two Nano-SIMs or one SIM along with a microSD card, giving you the option to expand storage. In terms of software, the Honor 8 Pro runs on EMUI 5.1 based on Android 7.0 Nougat. The UI is quite basic and does not need much time to get used to. Huawei claims that its control over hardware and software helps it deliver a better overall experience to the user. We saw the phone running the latest security patch which gives it a few points in our books. Honor has baked in a few customizations such as fingerprint gestures which let you control notifications by swiping on the fingerprint sensor on the back. Display output can also be tweaked by altering the color temperature to suit your taste. We also spotted night mode called "Eye Comfort" which filters out blue light to reduce eye fatigue.

In terms of performance, the Honor 8 Pro felt snappy, and we didn’t face any stutter or lag during our time with it. We will be able to gauge its performance only after we put it through our series of tests. The camera seems to be the highlight of this device, and it did manage to impress us on that front. The second sensor at the back doesn't have a telephoto lens like on the recently launched OnePlus 5, so while you won’t be able to zoom in optically, the dual cameras combine to capture details very well. The camera app has different modes which you can choose from before taking a photo. We also saw a wide aperture mode for video shooting which lets you adjust the aperture. The Honor 8 Pro is capable of delivering video in 4K resolution, as well as 1080p at 60fps. You’ll need to hold on for our review to hear our verdict on the camera.

After spending a day with the smartphone it seems that the Honor 8 Pro is a step up for the Honor lineup. The Kirin 960 is currently Huawei’s top-of-the-line SoC and promises good processing power, and the 6GB of RAM will help with multitasking. We are also waiting to see how the Kirin 960 fares against the recently launched Snapdragon 835. Pricing will be crucial for the 8 Pro, as the OnePlus 5 is a serious competitor. Stay tuned to Gadgets 360 for our full review of the Honor 8 Pro.

Disclosure: Honor sponsored the correspondent’s travel and stay for the event in Lonavala.