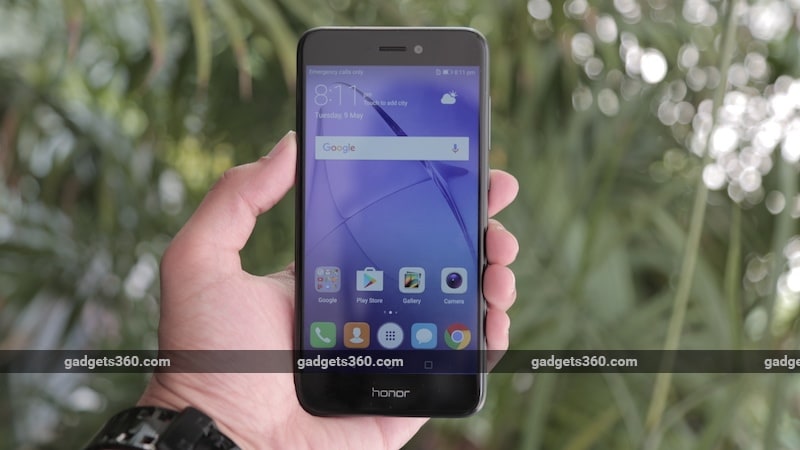 Huawei's Honor 8 Lite was first launched in Finland back in February and it has now made its way to the Indian market. Details of its pricing and availability have not been announced yet, but we do know that it will come in black and blue color options. We got our hands on the smartphone and here are our first impressions.

Talking about its design first, the Honor 8 Lite borrows some of its looks from the Honor 8. The smartphone itself is pretty striking to look at, especially in black, which is the colour of the unit we were able to spend some time with. The front and back feature 2.5D curved-edge glass with a metal frame all around, similar to Samsung's Galaxy A-series. Manufacturers seem to be using glass to make products feel premium, and the Honor 8 Lite does manage that. The back doesn't smudge as easily as the front, but it will pick up some fingerprint impressions. While the metal frame gives this phone an overall solid feel, the physical buttons feel a little flimsy and can put you off.

The volume rocker and power button are on the right. while the hybrid dual-SIM tray is on the left. You can use two Nano-SIMs or one Nano-SIM and one microSD card. There are some design changes compared to the Honor 8. For example, the Honor 8 Lite has two speaker grilles on the bottom and its 3.5mm audio socket on the top, whereas the Honor 8 had one grille plus the connector on the bottom.

Being a 'Lite' version of the Honor 8, some of the features of this phone have been downgraded, such as the fingerprint sensor on the back which doesn't double up as a physical button, and a single rear camera instead of two.

At 7.6mm, the phone sits well in the hand and feels smooth to hold, although the glass back may feel slippery for some users and on some tables. At 147 grams, the Honor 8 light is a bit lighter than the Honor 8 and you shouldn't have a problem carrying it around in your hand through the day. We'll reserve our final verdict on comfort and build quality for the full review.

When we reviewed the Honor 8, we were quite impressed with its full-HD display, and the Honor 8 Lite doesn't disappoint us either. The new model features a 5.2-inch full-HD (1080x1920) display, similar to the Honor 8, and we found its colors to be quite vibrant. The screen holds up well outdoors and you won't have trouble reading text. The new version of EMUI has an Eye Comfort mode that gives everything a yellow tinge, which according to the company, makes the screen easier on the eyes.

The Honor 8 Lite runs on EMUI 5.0 which is based on Android 7.0 Nougat. The phone is powered by Huawei's own octa-core Kirin 655 SoC paired with 4GB of RAM. It also has 64GB of storage with the option to expand it using a microSD card (up to 128GB). In our brief time with the device we found that the UI worked smoothly. Flipping through apps was quite fluid, and they launched quickly. However, the device would sometimes fail to register touch inputs when trying to increase/decrease brightness, for example. The fingerprint sensor is extremely snappy, to the point that you might find yourself accidentally unlocking the phone at times.

Huawei has worked on some notable design changes with EMUI 5.0, which is now a lot cleaner and easier to work with. It has a pleasant blue theme. The biggest addition is an app drawer option for those who don't like to see all their icons an widgets together on the home screen. There are some performance and security upgrades as well. Swiping left brings up a Flipboard-like service called HiBoard, which gives you top stories of the day along with app suggestions and a universal search bar.

India-specific features include SOS calling, which lets you assign people who will be contacted in case of emergencies, as well as Hindu and Islamic calendars integrated into the English calendar app.

The Honor 8 Lite features a 12-megapixel rear camera with f/2.2 aperture and autofocus, and an 8-megapixel selfie camera with a 77-degree wide-angle lens and f/2.0 aperture. From the pictures we were able to take, those taken outdoors looked bright with good detailing, but some colours popped out a little too much while others felt washed out. Autofocus also didn't lock on as quickly as we would have liked. The front camera also worked well outdoors, and we found its wide angle lens helpful. We'll save final judgement on these matters until our detailed review.

Swiping right within the camera app shows you modes and filters such as a Pro mode that lets you tweak the ISO value and other settings to your liking. Swiping left brings up the settings, where you can choose the resolution, show a framing grid and set a timer, among other things.

The Honor 8 Lite is fitted with a 3000mAh battery. In our brief time with it, we weren't able to test its battery life, so you'll have to wait for our full review for our verdict on that.

Considering its specifications, the Honor 8 Lite should likely be priced under Rs. 20,000 and will look to compete against the likes of the Moto G5 Plus and Vivo Y5s. Stay tuned to Gadgets 360 for our in-depth review of the Honor 8 Lite's performance, build quality, camera quality, and battery life.