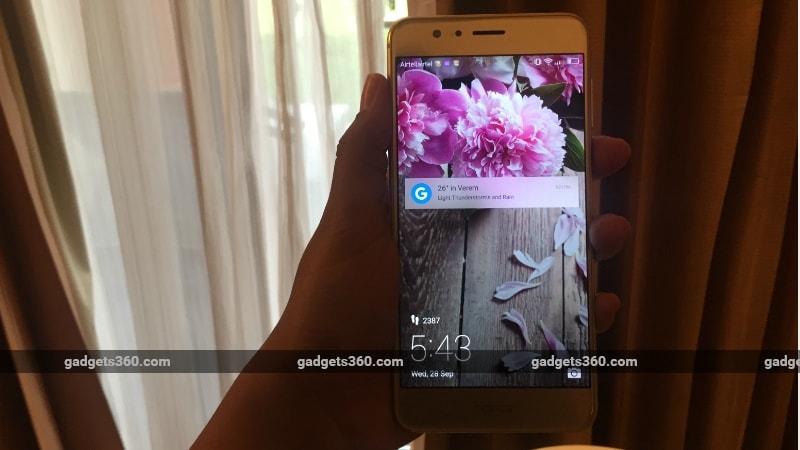 Huawei's Honor 8, launched in July at an event in China, is set to arrive in India soon. As we already know, the biggest highlight of the device is its dual rear cameras with two 12-megapixel sensors. The successor to the Honor 7 (Review) comes with significant upgrades, most notably a new premium overall design. We had some time to play with the Honor 8 smartphone, and here are our first impressions.

Seen from the front, the Honor 8 looks chic and classy. It is dressed all in metal, and has 2.5D rounded-edge glass on both sides. The few hints of plastic seen on the Honor 7 have disappeared, and this new model sports an elegant metal frame with antenna bands on the sides, giving it a premium feel. The Honor 8 has taken inspiration from the iPhone 7 and Samsung Galaxy S7, with respect to design. However, the dual camera setup does not protrude like that of the iPhone 7 Plus. It sits within the frame, and is protected by glass. Just like with the Honor 7, the fingerprint is placed on the back, but this time it can be physically pressed. It can be used to perform multiple functions such as opening apps, calling up Google Now, and scrolling through photos while viewing them in the Gallery. Swiping up and down opens and closes the notifications panel as well. Huawei claims that the sensor is accurate and fast, and can read fingerprints in 0.4 seconds. It has a new 3D tech embedded, which even records the ridge depth of fingerprints.

The Honor 8 has thin bezels. Its display is the same size at 5.2-inch and resolution (1080x1920 pixels) as that of its predecessor, so there's no upgrade on that front. In our short time with the device, we found the Honor 8's display to be crisp and bright indoors, but we did see some reflectiveness in direct sunlight. The power and volume buttons sit on the right side of the device; and the speaker grille, 3.5mm audio jack and USB Type-C port are on the bottom. The smartphone fits in a palm nicely, has a good grip, and is not too heavy either.

It runs Honor's Android Marshmallow-based EMUI 4.1 OS. Huawei has kept the interface simple and easy to browse through. Preloaded apps include Google Cast, Magic Tag, and even a new Health app that allows users to count steps, distance, and calories burnt. It allows you to set goals and even reminds you of daily workouts. There are UI tweaks such as a nifty scroll screenshot feature and several gesture-based functions. There's 22GB of storage available to users (32GB overall storage) on the Honor 8, and a microSD slot that allows for extension of up to 128GB.

Coming to the camera, the smartphone sports a dual camera setup just like iPhone 7 Plus, and the company's own Huawei P9 smartphone. However, this model comes without the Leica branding. There are two 12-megapixel sensors - one that records colour information, and the other records in monochrome with higher contrast. The two images are then merged to give the best end result. It sports f/2.2 aperture, laser autofocus, and dual tone dual-LED flash. The photos we took were quite impressive, and had vibrant colours, sharpness, and depth. The Pro Photo mode allows you to manually adjust ISO, white balance, focus, and even shutter speed. The modes now show up as a dial instead of the flat design seen earlier. HDR, slow-motion, Time-lapse, and Good Food modes are also available. Interestingly, even though the Honor 8 supports RAW image capture, the camera app has no option to shoot in the RAW format. For this purpose, users will have to download a third-party app. Low-light photography was also good, as the two lenses are able to capture twice the amount of light at the default shutter speed, bringing in more detail even at night. In the little time we were able to spend with the device, photos taken in low light seemed satisfactory. However, we will keep our final thoughts for when we properly review the device.

It's interesting to see how multiple manufacturers are now incorporating dual cameras into their smartphones, especially after the iPhone 7 launch. HTC was the first to introduce two rear cameras on a smartphone with its HTC One M8 which launched in 2014. Huawei followed suit with the Honor 6 Plus with the same idea, however the Honor 7 ditched that feature and was launched with a single 20-megapixel rear camera sensor. This year, Huawei has launched the Huawei P9, and now the Honor 8, both with two cameras at the back. After Apple's adoption of dual cameras, companies like Xiaomi and Huawei are all bringing this feature to their next flagships, and it now looks to become mainstream. There's also an additional 8-megapixel camera at the front for selfies.

It is unsure which variant(s) will make their way to India, however they should be priced in the same range as the Honor 7. The Honor 7 was launched at Rs. 22,999 last year, and if the Honor 8 is in the same price band, then it will give tough competition to the LeEco Le Max 2 and OnePlus 3.

Final thoughts
Even though we got to fiddle with a pre-release unit for only a fairly short time, we were instantly attracted to the build quality and aesthetics. The Honor 8's camera seems to work well in all kinds of lightning conditions, and the the Pro Photo mode has controls that a serious photographer will appreciate. Honor has thought of handy little tweaks in the software as well. The Honor 8 is expected to launch in India soon, and the key deciding factor will be its pricing in this highly competitive value-conscious market.