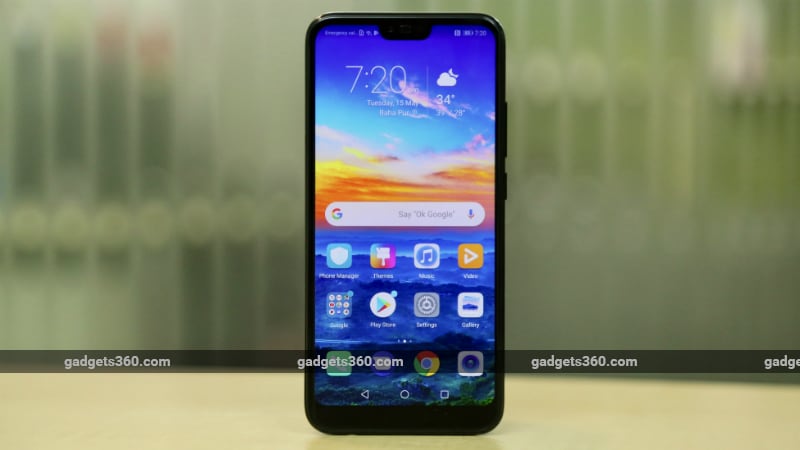 After the high-profile launches of the Huawei P20, P20 Pro and P20 Lite, it's now time for the company's sub-brand to unveil a new smartphone at an event in London. The Honor 10 is the new flagship from Honor, and features a glass-and-metal body, AI-enhanced cameras, a 19:9 display with a notch, and Android 8.1 Oreo out of the box. Honor 10 price in India has been set at Rs. 32,999 for the variant with 6GB of RAM and 128GB inbuilt storage, the only model coming to India. We got to spend some time with Honor's latest smartphone prior to the official global launch, and here are our first impressions.

The Honor 10 bears a slight resemblance to Huawei's recently launched P20 series of smartphones, at least from the front, thanks to the notch at the top of the display. The notch is quite small and can be masked thanks to an option in the settings. In our limited experience, most first-party applications ran fine on the phone's screen, with the area around the notch being used to display the time, battery level, and other status icons.

The Honor 10 has a 2.5D curved glass back, with an aluminium frame for rigidity. The smartphone looks sleek and feels solid in the hand. Thanks to the minimal screen borders and impressive 86.2 percent screen-to-body ratio, the Honor 10 is compact and pocketable. The curved glass back, rounded corners and curved edges also make it feel high-end.

The front fascia is dominated by a 5.84-inch full-HD+ IPS LCD that has an aspect ratio of 19:9 and a pixel density of 432ppi. In our limited time with this smartphone, we found the display to be bright and punchy, with great viewing angles and vivid colours. A detailed analysis of the display will have to wait till we conduct our exhaustive review.

The horizontally arranged dual-camera setup on that back has the words 'AI CAMERA' emblazoned right next to it. The fingerprint sensor, which is embedded beneath the glass up front, was fairly accurate but a bit slow in our brief experience. The smartphone also supports face recognition, which worked well in the time we spent with the device.

The Honor 10 is powered by Huawei's own Kirin 970 processor which includes dedicated logic, dubbed the Neural Processing Unit, to handle artificial intelligence computations locally instead of in the cloud. The Kirin 970 has been used in several of Huawei's premium models including the Huawei P20 Pro, Honor View 10, and Huawei Mate 10 Pro.

Other specifications include 6GB of RAM, a non-removable 3,400mAh battery, and 128GB of storage which cannot be expanded. Connectivity options include Wi-Fi 802.11ac, Bluetooth 4.2, GPS, Glonass, NFC, 4G VoLTE and a 3.5mm headphone jack. There's a USB Type-C Port for charging and data transfers, and quick charging is supported.

In our limited time with the Honor 10, it performed admirably, with butter-smooth animations and minimal load times. We'll see how it performs in our full review, when we can run games and synthetic benchmarks.

The Honor 10 runs Honor's EMUI 8.1 skin atop Android 8.1 Oreo. EMUI has come a long way in the past few years and is now fast, fluid, and snappy. That said, it still feels cluttered and there is a lot of preinstalled bloatware. Honor claims that EMUI 8.0 uses machine learning to intelligently analyse user behaviour and allocate resources accordingly. We will test these claims along with the phone's overall performance in our full review.

On the imaging front, the Honor 10 features a 16-megapixel primary rear camera with an aperture of f/1.8, and a secondary 24-megapixel monochrome camera with an aperture of f/1.8. The Honor 10 can intelligently detect the object or scene being shot and optimise image settings accordingly. At the moment, the smartphone can detect 22 different types of objects and scenes.

At the front, the Honor 10 has a 24-megapixel snapper with a pixel size of 1.8 microns and a 3D Portrait lighting mode similar to the one found on the iPhone X. AI enhancement is also supported, and the camera app uses software algorithms for background blurring. While it is too early to make a definitive assessment of photo quality, the AI features seem promising, and the camera app is feature-packed and easy to use.

With a promising set of cameras, good build quality, and a top-notch display, the Honor 10 looks all set to reignite competition in its price segment. We will soon be able to test it extensively, to see how it fares against the competition in terms of performance, battery life, photo quality, and software. Stay tuned to Gadgets 360 for updates, comparisons, and our detailed review of the Honor 10.