The GT 2 Pro picks up the mantle of the "flagship killer" from OnePlus and goes wild with it. 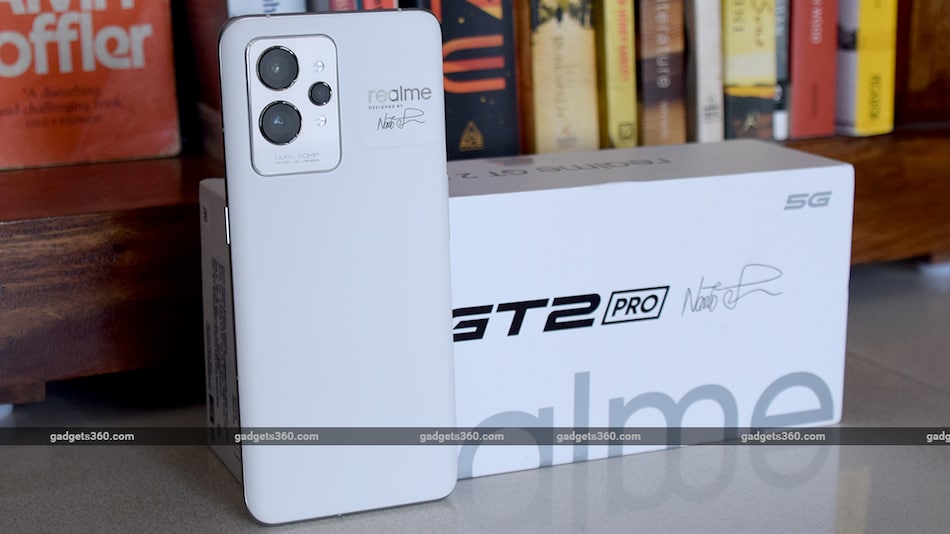 The Realme GT 2 Pro is currently the most expensive phone Realme sells in India but it's also one of the most affordable models you can buy with a top-of-the-line Qualcomm processor. It has just one direct competitor, and that is the Motorola Edge 30 Pro (Review). With a starting price of Rs. 49,999, the GT 2 Pro has a lot going for it such as a 2K display, fast charging, a good set of cameras, and the promise of very good gaming performance. So is it a better choice than the Moto? Let's find out.

The Realme GT 2 Pro has an optional unique texture for its back panel, which is said to mimic the look and feel of paper products. The special material for the back, which Realme says is derived from renewable sources, is used on the white and green versions of the phone. The Steel Black variant has a more common glass panel with a frosted texture.

After using a white unit for a couple of weeks, I'm happy to report that it didn't pick up any permanent stains or marks from daily use, as I thought it might. The wavy texture offers good grip and also ensures that fingerprints and smudges are never an issue. While I quite like the understated look of the matte-finished aluminium frame and the overall aesthetic of this phone, I wish Realme had given its most expensive model a bit more character to set it apart from the rest of its portfolio. If you use a case, it's easy to mistake the GT 2 Pro for any other phone in the GT, 9, or even C series.

One of the big selling points of the Realme GT 2 Pro is its display, which is usually found in pricier Android flagships. The 6.7-inch AMOLED panel has a 2K (3216x1440) resolution with a 10-bit colour depth and a maximum brightness of up to 1,400 nits. What's more, it also features LTPO 2.0 technology which means the refresh rate can vary from 1Hz to 120Hz based on your activity. To top it all off, Realme has used Corning Gorilla Glass Victus for scratch protection. Needless to say, the display performs incredibly well for playing games and watching videos on.

The box of the Realme GT 2 Pro contains a 65W SuperDart fast charger, a USB cable, and a case.

The Qualcomm Snapdragon 8 Gen 1 SoC in the Realme GT 2 Pro supports a total of 13 5G bands, and you get dual-5G support for both SIMs, which should be enough to handle any and all upcoming 5G networks in India. The phone also has stereo speakers and is Dolby Atmos certified. There are colour temperature sensors on the front and back of the phone to adjust the display's colour (mainly white balance) based on ambient lighting (similar to Apple's True Tone feature), and Realme has implemented heart rate monitoring using the in-display fingerprint reader as an experimental feature.

The Realme GT 2 Pro also boasts of a stainless steel vapour cooling chamber, which along with multiple layers of heat-dissipation materials, promising to keep the phone from overheating when stressed. The software includes a GT Mode toggle, which is supposed to prevent the SoC from throttling in order to deliver sustained performance in heavy apps.

Two features that are missing, and that I wish had been present, are wireless charging and an IP rating. There is a rubber gasket around the edge of the SIM tray to prevent water from entering, which could suggest that the phone has water-repellent safeguards in place, but Realme doesn't officially give any guarantees. The absence of these features on the base variant of the GT 2 Pro is perhaps excusable but at the price of the higher-priced variant, it's a bit more glaring. The Motorola Edge 30 Pro offers both these features along with competitive specs, which could sway buyers away from the GT 2 Pro.

The Realme GT 2 Pro runs Realme UI 3.0, based on Android 12. The look of the interface is customisable, and it runs smoothly. There are plenty of bundled apps, including some from Realme such as the Realme Store and Community. I was surprised to not face any issues with notification spam from Realme's first-party apps. You can declutter the phone by simply uninstalling most of them.

Realme has also pledged to support this phone in the long run with three years of Android OS updates and four years of security updates, which I think is a show of good faith.

The Realme GT 2 Pro is not a cumbersome phone to live with, which is not something that can be said for many Android flagships. It's not too thick and the weight (189g) is well distributed making it relatively light and easy to carry with you. The black version with the glass back is a bit heavier at 199g.

The GT 2 Pro handled most popular social and productivity apps very well. The interface was always snappy and fluid. I liked that the in-display fingerprint sensor is positioned closer to the centre of the display for ease of use. The display gets bright enough to see your content clearly, even under direct sunlight. I had the display resolution at ‘Auto select' for the entire review period and I noticed that it rendered pretty much all apps and content, including games, at the native WQHD+ resolution.

The Realme GT 2 Pro excels with media playback and gaming. Videos looked very good with excellent colour saturation, sufficient brightness, and good HDR rendering. The stereo speakers were also very loud and sounded good. Gaming performance was equally solid. Asphalt 9: Legends ran smoothly with a solid frame rate and good graphics. The phone didn't overheat too much either. However, more demanding titles such as Fortnite made the body of the GT 2 Pro uncomfortably hot after prolonged gaming. Even when playing this game indoors, I noticed that the upper half of the frame and some portions of the back panel got very hot after about 20 minutes. After a point, I had to put the case on this phone because the heat got unbearable.

This wasn't an issue with every game, but graphically demanding titles certainly push the GT 2 Pro's cooling system to its limits. The phone performed very well in benchmarks too, delivering an impressive score of 972,119 points in AnTuTu.

Battery life was also quite good for a phone with this SoC. On average, I was easily able to get through one full day and a bit more on a single charge. The phone also lasted for 20 hours and 41 minutes running our HD video loop test. Charging the 5,000mAh battery doesn't take too long either thanks to the 65W charger. You can fully charge it, from empty, in a little over half an hour, which is very quick.

The Realme GT 2 Pro has a good set of cameras that perform well during the day and in low light. Realme has used the Sony IMX766 50-megapixel sensor for the main rear camera, and it also has optical stabilisation and a wide f/1.8 aperture. It can shoot up to 8K 24fps videos. In daylight, autofocus was quick and landscape shots had rich details and colours. Close-ups also had very pleasing background blur and excellent details. Low-light pictures were very good too, with little to no noise and an above-average level of detail. Close-ups taken in low light were sharp and had good detail thanks to OIS.

The ultra-wide camera on the Realme GT 2 Pro uses the 50-megapixel Samsung JN1 sensor, which we've already seen in the OnePlus 10 Pro (Review). Ultra-wide shots packed in slightly less detail and colours weren't always very accurate to the actual scene, but barrel distortion and HDR were handled well. There's a 150-degree shooting mode in the camera app, just like on the 10 Pro, which lets you take advantage of the lens's full field of view. Low-light photos weren't as bright compared to ones taken with the main camera even though night mode was automatically engaged, but it was still very usable.

Extreme close-up of the stamen of the flower from the above sample, taken with the Realme GT 2 Pro's micro-lens camera

The third camera has a 2-megapixel sensor with a "micro-lens" that allows you to capture extreme close-ups at 20X or 40X magnification. You can use it to capture some interesting perspectives of everyday objects. In 'Microscope' shooting mode, the phone needs to be millimetres away from your subject for it to be in focus. Since lighting is generally an issue at such close proximity, the two LEDs placed above and below the micro-lens automatically activate when using this mode. There are some fun filters to play with too.

The selfie camera in the Realme GT 2 Pro has the same 32-megapixel Sony IMX615 sensor as the one on the OnePlus 10 Pro. it captures good photos during the day and in low light. Skin smoothing is enabled by default for selfies but skin tones and textures get vastly better if you switch to the natural profile.

Video recording capabilities are also top-notch on the Realme GT 2 Pro. 8K videos shot during the day and at night looked good, but stabilisation made any movement of the camera look a bit jerky. Videos recorded at 4K looked great too and had much smoother stabilisation. The camera app allows you to switch between the main and ultra-wide cameras while recording at this resolution.

There shouldn't be any doubt by now that the Realme GT 2 Pro is a very good premium smartphone that punches well above its weight. The base variant with 8GB of RAM offers the best value, in my opinion. I would recommend it over the Motorola Edge 30 Pro for its superior display, unique textured design, better battery life, and reliable cameras. However, if an IP rating and wireless charging matter to you, then the Motorola would be the smarter choice.

The 12GB variant of the GT 2 Pro is less expensive than most other Snapdragon 8 Gen 1 smartphones, but at nearly Rs. 58,000, I think options such as the Samsung Galaxy S21 FE 5G (Review) or even the OnePlus 9 Pro 5G (Review) are more complete flagships and offer better value since you can now often find them selling for less. They might lack the brute force of the GT 2 Pro's SoC, but they more than make up for that with features such as wireless charging and official IP ratings.