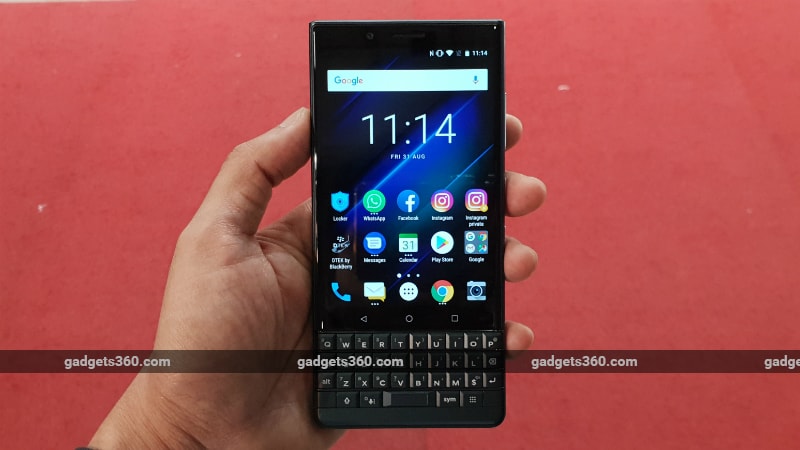 BlackBerry licensee TCL Communication has launched a low-cost variant of the BlackBerry KEY2 at IFA 2018, the BlackBerry KEY2 LE. The phone is priced starting at $399 (roughly Rs. 28,300) and features less RAM, a slower processor, and a smaller battery compared to the KEY2, which was recently launched in India for Rs. 42,990. This new model has a Snapdragon 636 SoC, a QWERTY keyboard, a fingerprint sensor mounted on the space bar, and a full-HD+ panel. We got to spend some time with the BlackBerry KEY2 LE at IFA 2018 and here are our first impressions.

The KEY2 LE has a rubberised back and a frame made out of plastic, in comparison to the KEY2's Series 7000 aluminium alloy frame. Still, this new phone feels quite solid in the hand, despite the plastic. The sides have a brushed-aluminium-like finish and the rubber back enhances grip and feels premium.

The KEY2 LE has a textured power button and a volume rocker on the right, which are large, tactile, and well within reach. There's also a remappable convenience key, using which you can access your favourite application easily. The left is barren save for a SIM tray. There's a 3.5mm headphone jack at the top, and the USB Type-C port is at the bottom. The phone has been launched in Atomic, Champagne, and Slate colour options. Atomic is a cross between red and orange, and is easily the most striking of the three. The Champagne shade also looks classy and elegant.

Our first impressions of the fingerprint sensor, which is embedded within the spacebar, were quite positive. It is fast and accurate, and the setup process is also quick and painless. Face recognition is supported, but we were not able to test this feature properly in our brief hands-on. The keyboard is a downgrade compared to the KEY2. BlackBerry has removed the touch capability which allows for flick typing, scrolling through documents, and using the keyboard to position the cursor. On a positive note, the keys are tactile and have a decent amount of travel. The keyboard also retains the Speed Key, which allows users quick access to their most used applications and actions.

The BlackBerry KEY2 LE features a 4.5-inch 1080x1620-pixel IPS LCD with an aspect ratio of 3:2 and a pixel density of 434ppi. In our limited time with the device, we found the display to be satisfactory, with decent viewing angles and vivid colours. We couldn't test the phone outdoors, so we cannot comment on sunlight legibility.

The smartphone is powered by the Qualcomm Snapdragon 636 processor, paired with 4GB of RAM. In our limited time with it, there appeared to be no lag when navigating around the UI, and app load times were reasonably quick. Of course, a definitive assessment of the KEY2 LE's performance will have to wait till we can test this device extensively.

Other specifications include 32GB/ 64GB of onboard storage, which can be expanded using a microSD card (up to 256GB) and a 3,000mAh battery with support for Qualcomm's Quick Charge 3.0 standard. Connectivity options include 4G LTE, dual-band Wi-Fi 802.11ac, Bluetooth 5.0 LE, NFC, GPS/ A-GPS, GLONASS, and USB Type-C with OTG.

We took a few photos with the rear camera, and found that focusing was quick and there was very little shutter lag. We can't comment on the quality of photos at the moment but BlackBerry smartphones have often been criticised for their cameras, and we are curious to see if the KEY2 LE manages to break that mould.

The KEY2 LE will be made available in markets including Canada, France, Germany, the UAE, the UK, and the US starting next month. It comes across as a solid, no-nonsense smartphone crafted for physical keyboard loyalists on a relatively tight budget. BlackBerry smartphones are sold in India by licensee brand Optimues Infracom, which recently launched the KEY2 in the country for Rs. 42,990. If it brings the KEY2 LE to India and prices it aggressively, this phone could definitely make its presence felt in the market.