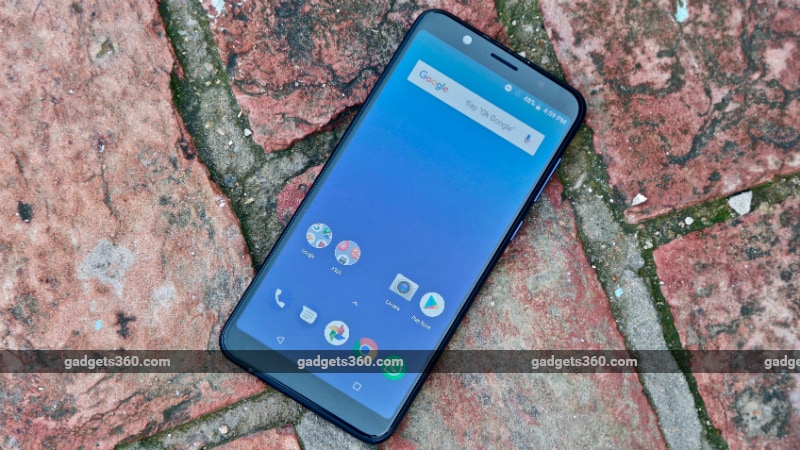 We reviewed the variant with 3GB of RAM when it first launched, and were impressed with its vibrant display, stellar performance, good looks, and great build quality. However, the cameras were only just about decent, and battery life was disappointing, given the large battery underneath. Does the 6GB ZenFone Max Pro M1 improve upon the performance of the earlier variants? Let's find out in our full review.

The 6GB RAM variant looks identical to the variants with 3GB and 4GB of RAM. We won't spend too much time rehashing the ZenFone Max Pro M1's design. It has a metal backplate with plastic inserts at the top and bottom. Weighing in at 180g, it is quite a hefty phone, with its 5,000mAh battery contributing to the relative bulk.

The back is a fingerprint magnet, but the camera module on the ZenFone Max Pro M1 barely protrudes from the chassis. The rear-mounted fingerprint sensor is quick and accurate, and the setup process is also quite snappy. The smartphone is available in Grey and Midnight Black, and our review unit is the latter.

The layout of buttons and ports is the same as with the other variants of this phone. There is a SIM tray on the left, with separate slots for two Nano-SIMs and a microSD card. The power button and volume rocker are on the right, and are quite small but well placed. The lack of USB Type-C is disappointing. The age-old Micro-USB port is present on the bottom, flaked by a 3.5mm headphone jack and a single loudspeaker, which is quite shrill and tinny.

The Asus ZenFone Max Pro M1 runs a near-stock version of Android 8.1 Oreo. It is powered by the octa-core Qualcomm Snapdragon 636 SoC with an integrated Adreno 506 GPU, and it has 6GB of RAM. There is a 5,000mAh battery under the hood. The phone has 64GB of storage with support for expansion using a microSD card (up to 2TB).

Connectivity options include Wi-Fi 802.11 b/g/n (only on the 2.4GHz band), Bluetooth 5.0, GPS, GLONASS, dual 4G VoLTE, a Micro-USB port (USB 2.0 speed), and a 3.5mm headphone jack. This phone supports dual SIMs (Nano) and both can latch onto 4G networks simultaneously. The smartphone ships with a 10W charger, a USB cable, and a cardboard accessory called the Max Box. This foldable stand has a cutout at the base that is supposed to amplify sound. It does increase volume a little bit, but it doesn't make a huge difference.

The Asus ZenFone Max Pro M1 has a 5.99-inch full-HD+ display with an aspect ratio of 18:9, which makes content look immersive. The screen dominates most of the front fascia but is not exactly borderless. The chin is quite substantial, but we are glad to see there is no notch. Colours are vibrant but the viewing angles are just about okay. The screen is also bright enough for outdoor use. There is a night mode as well as manual colour temperature adjustment in the Settings app.

The Asus ZenFone Max Pro M1 tackled everything we threw at it - from basic day-to-day use such as browsing the Web and using social media applications, to intensive workloads - without any problems. Even heavy games like the recently launched Asphalt 9 ran without a hitch, and the phone did not heat up too much when pushed. With 6GB of RAM, we expected a sizeable difference in performance compared to the 3GB variant. Games did load more quickly, and our review unit kept most apps running in the background, even those left unused for a full day.

However, there really was wasn't much discernible difference in day-to-day performance. Truth be told, we had no issues when multi-tasking and playing heavy games with the 3GB variant either. Benchmark results were also more or less the same for both variants.

After we originally tested the 3GB variant of the ZenFone Max Pro M1 back in April, the phone has received several OTA software updates. To be fair, we retested both variants so they were running the most recent software. While benchmarks scores were more or less the same as before, we are pleased to report that real-world battery life has improved with the final software, even more so with the 6GB variant.

If you are a long-term Asus user, you might be glad to note that gone is Asus' heavy and bloated ZenUI custom skin, and in its place is a near-stock build of Android 8.1. The company claims that this move was in response to market research, which indicated that this market segment prefers stock Android. Asus has told Gadgets 360 that it plans to update the ZenFone Max Pro M1 all the way to Android Q.

The software is fluid and very responsive. Facebook, Messenger, Instagram, and Go2Pay are preinstalled and cannot be removed by users. While this amount of bloat is minimal, its presence is disappointing. A few ZenUI apps are also included, like Sound Recorder and FM Radio.

As with most smartphones these days, the ZenFone Max Pro M1 also supports face recognition, using its 16-megapixel front camera. The process is quite slow, even when lighting is favourable. The speed and accuracy both take a hit in dim light.

In our HD video loop battery test, the 6GB variant of the ZenFone Max Pro M1 lasted 12 hours and 50 minutes, a step up from the 3GB variant's 12 hours and 2 minutes. Real-world performance was absolutely stellar. The smartphone easily got us through 12 hours of moderate use, with more than 50 percent left in the tank. Our usage involved around an hour or two of navigation using Google Maps, frequent use of social media applications, games such as the recently launched Asphalt 9, and taking a couple of photos and selfies.

The only chink in the armour is the lack of fast charging, which means that this phone takes 2 hours, 40 minutes to charge fully.

Along with the bump in RAM, this new variant of the ZenFone Max Pro M1 brings with it a new set of cameras. The 3GB/ 4GB RAM variants of the smartphone have a 13-megapixel primary rear cameras with apertures of f/2.2, alongside secondary 5-megapixel depth sensors. On the front, they have 8-megapixel sensors with apertures of f/2.2. With the new 6GB variant, both the primary rear sensor and the selfie camera have been bumped up to 16 megapixels and f/2.0 apertures. As with the less expensive variants, both the rear and front cameras are accompanied by single-LED flashes.

Let's talk about the rear camera setup first. Colours are more accurate, and so is the exposure. The new sensor captures more detail. The colours captured with the 3GB variant's camera are oversaturated in comparison. The real difference is seen in unfavourable light. Images captured with the 6GB variant have less noise and are noticeably more detailed. However, the colour temperature might be a bit too cold for some.

The new ZenFone Max Pro M1 struggles to focus on objects that are very close to the lens. We did not face this issue on the 3GB variant of the smartphone. The 5-megapixel secondary sensor at the back allows for depth-of-field effects. Shots taken in portrait mode are better than before, but still need some work. Edge detection is average and processing is extremely slow. Shots also get fuzzy at night. Autofocus issues aside, the rear camera is a noticeable upgrade over the one found on the lower variants.

Video capture maxes out at 4K for the rear camera and 1080p for the front camera. Videos are detailed but suffer from focus shifting. In our earlier review, we had noted that Asus's camera app is quite confusing. Sadly, the company has made no improvements in this area. The application is still very cluttered, with basic controls such as the flash toggle buried within menus.

Verdict
The new 6GB version of the ZenFone Max Pro M1 is an extremely capable smartphone, and is well worth its Rs. 14,999 price tag. Battery life is stellar, performance is great, the software is fluid, and build quality is top-notch. The rear camera setup is also improved, and captures more more detail in all lighting conditions. However, there are a few rough edges. The rear camera's autofocus is unreliable, and the front camera is not really an upgrade compared to the lower-end variants.

By releasing this variant, Asus is hoping to strengthen its position as a Xiaomi killer. Compared to the identically priced 4GB variant of the Xioami Redmi Note 5 Pro (Review), the ZenFone Max Pro M1 offers a higher capacity battery, a dedicated microSD card slot, and two extra gigabytes of RAM. It must be noted though that Xiaomi's smartphone has a better front camera and the portrait mode for the rear camera works better.

The more affordable variants of the ZenFone Max Pro M1 are also still well worth considering. Those willing to live with a slightly inferior rear camera will be well served by the 3GB and 4GB variants, which offer stellar value for money and almost exactly the same performance.

Asus struggled to meet demand for the ZenFone Max Pro M1 ever since its launch, and availability has been this phone's biggest problem. However, the company has just recently announced that the 3GB and 4GB RAM variants will be available in open retail. As of now, the higher-specced 6GB RAM variant will only be available through flash sales, and stocks will be limited, but Asus has said that it is working towards ramping up supply.