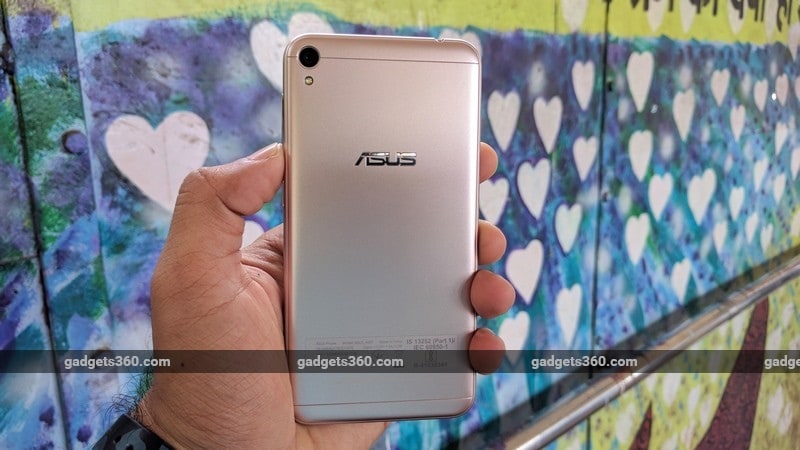 Multiple phones from various manufacturers offer to do just that thanks to beautification modes of their own. However these beauty modes are restricted to photos only. What the ZenFone Live claims to do differently is to let you have the artificial beauty enhancement feature in live videos. So will the Asus ZenFone Live make you look good online? And how is the rest of the package? We find out.

Asus is known to use the same design for phones in a particular series. So with the ZenFone Live, instead of a new look Asus seems to have stuck to its ZenFone 3 series design. The ZenFone Live is available in three colours Rose Pink, Black, and Gold. The phone has rounded sides and edges that make it comfortable to hold and grip. We also found it to be light, tipping the scales at 120gms. Asus has used plastic as the primary material for the phone and it does not feel all that premium.

The ZenFone Live sports a 5-inch display along with 2.5D glass that curves at the edges. It has the front facing camera, selfie flash, proximity sensors and the metal mesh earpiece above the display. Asus has opted for capacitive touch button for navigation instead of on screen buttons. Sadly, these buttons are not backlit and we had our fair share of missed hits in the dark.

The volume and power/ lock buttons on the ZenFone Live are positioned on the right and have the same textured finish. A different texture would have made it easier to distinguish between the two. On the left side is the hybrid SIM tray that can house two Nano SIM cards or one Nano SIM along with a microSD card.

The Asus ZenFone Live has a Micro-USB port, a single speaker grill, and a microphone port at the bottom and a 3.5mm audio socket and secondary microphone on the top. At the back, a 13-megapixel camera sits above the single LED flash and a metallic Asus logo is embossed near the middle. The ZenFone Live misses out on a fingerprint sensor and that isn't a positive sign.

Asus does not provide detailed information about the SoC inside the ZenFone Live on its website, simply stating it has a Qualcomm Snapdragon Quad Core Processor. Most people will guess it to be the Snapdragon 425 or be a little grumpy at the possibility of an older Snapdragon 410. But what Asus has opted for is the Snapdragon 400. That's right, a SoC from 2013 is powering this phone launched in 2017. The processor is clocked at 1.5GHz and there is 2GB of RAM onboard.

Internal storage on the ZenFone Live is 16GB out of which around 10GB is available to the user. Storage is expandable up to 256GB via a microSD card at the expense of the second SIM. The battery is non removable and is rated at 2650mAh. Asus provides a SIM ejector tool, a USB cable and a 5.2W charger in the box.

The ZenFone Live sports a 5-megapixel front facing camera with a selfie flash. For regular point and shoot duties, it packs a 13-megapixel camera at the back along with a single LED flash. The camera app is quite easy to use and there are lots of modes to choose from.

In our use, the phone focused quickly while shooting in daylight conditions. When clicking macro shots the phone did need a few taps to focus at the desired area. The output was acceptable and good enough for sharing.

In low light, the camera took slightly longer to focus and the output was dull and too grainy for our liking. There is the option to switch on low-light mode which bumps the ISO up and lowers the shutter speed. Also, in this mode, the resolution of the photo is restricted to 3-megapixel.

The 5-megapixel selfie camera on the ZenFone Live has 1.4 micron pixels and a selfie flash, both of which help in low-light conditions. Beautification mode is switched on by default and there are multiple options to tweak the output. With the beautification enabled it takes slightly longer for the phone to process the output. Video recording for the selfie camera is limited to 720p, and you can use the beautification mode here as well. We found that the device struggled when using shooting with this mode - the phone lags as it seems to struggle to record video, apply the filters, and then display the output on the screen. Check out our video review above for an example.

If it's any solace, the Live Beautification does seem to work as advertised. The ZenFone Live currently supports live beautification for streaming to Facebook, YouTube, and Instagram. Asus has also turned down the tweaks it offers for beautification. It shows a dial from zero to ten which lets you adjust the level of beautification you need. Live Beautification works for both the rear and front cameras and we observed that the applied filters aren't as aggressive. As a result this feature worked well when we tested it with Instagram.

We weren't particularly happy when we found out that the device is powered by a Snapdragon 400 processor. It was initially seen powering the first gen Moto G (Review) and towards the end of its life - or what we thought it was EOL, anyway - the same SoC was powering Android wearables. The choice of the SoC is quite odd and could turn out to be an expensive mistake.

Right from the start, it was evident that the ZenFone Live is powered by an old processor. Loading apps and games would take really long and just 2GB of RAM onboard doesn't help its case. We found the ZenFone Live to be very aggressive with RAM management forcing the phone to relaunch most apps again. This resulted in frustrating wait times for the app to load all over again.

The ZenUI skin on top of the dated Android Marshmallow, but is comfortable to use and is functionally similar to stock Android. Asus uses a lighter theme and bigger icons for the quick toggles that make it easy to use. There are gestures which let you launch apps by drawing alphabets of the screen and you can also double tap the display to turn the display on and off. Asus has installed a lot of its apps along with Facebook and Instagram, all of which may be not be useful for everyone.

The Asus ZenFone Live managed to run all the games but there was considerable battery drain during the gaming sessions. So if you are a gamer the average performance and the 2650mAh battery won't keep you interested in the phone for long. Asus has ensured that the ZenFone Live has support for 4G and VoLTE on both SIM slots but only one can latch on to 4G at a time while the other is restricted to 2G connectivity.

The Asus ZenFone Live claims to be the first to have live beautification for social media. It somewhat delivers on that front but there are too many sacrifices. The choice of an outdated processor for the ZenFone Live is highly questionable and the missing fingerprint sensor does not help its case.

Asus has a good feature on its hands and will work even better when paired with the right hardware. It'll be interesting to see if this feature makes it to other Asus smartphones. As for the ZenFone Live, the processor seems to be the single component that is dragging the overall experience down. For a price of Rs 9,999, the ZenFone Live is very hard to recommend especially when we have phones like the Redmi 4 (Review) and the Moto G5 (Review) that offer much better overall package and value for money.