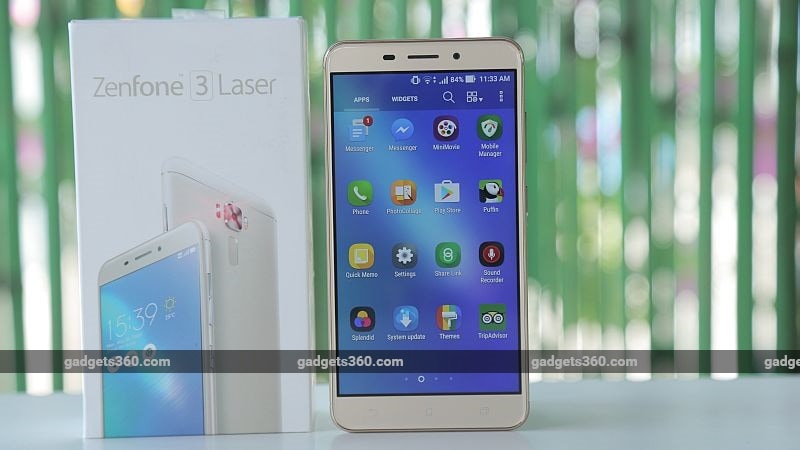 Asus has focused on the premium segment with its third-generation ZenFone smartphone range. The company has made it clear that it no longer wants to fight it out in the budget smartphone market where competition has been fierce lately. Asus is now looking to take on the likes of Apple, LG, and Samsung. While the Taiwanese company is yet to launch the top-end ZenFone 3 Deluxe that will go up against all of today's flagships, the rest of the range is steadily being released in India.

We reviewed the Asus ZenFone 3 (ZE552KL) a little while ago and it came out looking like a strong alternative for buyers who are looking at the popular OnePlus 3 (Review). Recently, the company started selling the Asus ZenFone 3 Laser (ZC551KL) in India, which will only be available online for a month before hitting offline retail channels.

Similar to other ZenFone 3 models, the new Asus ZenFone 3 Laser runs Android 6.0 Marshmallow and features a metal body. This particular model is aimed at shutterbugs, with its quick autofocus and improved camera. Will that be enough to set it apart from the competition? We try to find out.

Asus ZenFone 3 Laser look and feel
The ZenFone 3 Laser sports an all-metal body with 2.5D Corning Gorilla Glass in front for protection. It measures 149x76x7.9mm and weighs 150 grams. Despite featuring a 5.5-inch screen , the ZenFone 3 Laser easily fits in one hand. The Asus ZenFone 3 (ZE552KL), on the other hand, has the same screen size but we didn't find it as comfortable to use one-handed.

The front is dominated by the 5.5-inch full-HD display, above which is the front camera. According to Asus, the handset sports 77 percent screen-to-body ratio. There are capacitive Android navigation buttons below the display. Considering that the navigation buttons are not backlit, we initially found this phone hard to use in the dark. Our review unit was the Sand Gold colour, and this phone will be also available in silver.

The rear is also metal, unlike the ZenFone 3 which came with glass back. There are two lines running across top and bottom of the rear, similar to the back of the Xiaomi Redmi Note 3. Asus says that this phone has a fingerprint- and smudge-resistant oleophobic coating.

The rear camera protrudes from the back and follows the same design language as the rest of the ZenFone 3 range. Near it, you'll see the dual-LED flash and laser autofocus emitter. The fingerprint scanner is placed right below the camera, and Asus branding can be seen at the bottom. The power and volume buttons are on the right, while the hybrid SIM slot is on the left. The top features the 3.5mm audio jack while the bottom has a standard Micro-USB port and speaker grille.

One of the difficulties we faced during the review period was that the edges of the Micro-USB port and the two screws on the bottom were a bit sharp, and and we ended up with minor scratches on our palm while using this phone.

The 5.5-inch full-HD (1080x1920-pixel) IPS display is vibrant and can reproduce colours really well. Blacks are rich, and the brightness level is also quite good. Text and images look crisp. Users can adjust the colour temperature using Asus' Splendid app. Sunlight legibility was decent and we had no trouble using the handset outdoors at any given time. Viewing angle was also not a problem while watching movie, video, or any other multimedia content.

We however found that the display was fingerprint magnet and we had to clean it from time to time. Much like the ZenFone 3 (ZE552KL), the ZenFone 3 Laser features a blue light filter that claims to protect eyes from glare. During our review, we didn't face any issue with touch response, and there's support for using this phone with gloves as well.

Asus ZenFone 3 Laser specifications and software
The ZenFone 3 Laser is powered by an octa-core 64-bit Qualcomm Snapdragon 430 processor clocked at 1.4GHz, with integrated Adreno 505 graphics and 4GB of LPDDR3 RAM. It packs 32GB of built-in storage and supports up to 128GB more using a microSD card. In collaboration with Google, Asus is also offering up to 100GB of cloud storage on Google Drive for two years, which you can use to store photos, videos, and other documents.

There's a 13-megapixel rear camera with f/2.0 aperture and dual-LED real-tone flash. It supports 1080p video recording at 30 fps. There's also an 8-megapixel front camera with f/2.0 aperture. Connectivity options include Bluetooth 4.2, Wi-Fi 802.11a/b/g/n, Wi-Fi direct, GPS/A-GPS, Glonass, and 4G. The handset has a hybrid SIM slot and supports one Micro-SIM and the other slot is for a Nano-SIM, but users have to choose between two SIMs or one SIM with one microSD card.

Asus claims that SIM in either slot can support 3G and 4G networks though only one can be active at a time. The ZenFone 3 Laser supports LTE cat 4 speeds, which means downloads of up to 150 Mbps and uploads of up to 50 Mbps. The handset is backed by a 3000mAh non-removable battery.

The Asus ZenFone 3 Laser runs Android 6.0 Marshmallow with the company's ZenUI 3.0 skin on top. The software running on the ZenFone 3 Laser is identical to that of the ZenFone 3 (ZE552KL) and you can read more about it in our review of the ZenFone 3. The most notable features include the real-time animated weather and clock widgets; parallax motion effect on the home screen; and Zen motion gestures that let you perform tasks quickly.

Asus over the years has definitely improved its ZenUI interface. The latest version seems light, clean, and uncluttered. We were however disappointed to see a lot of Asus's own apps including Themes, Photo Collage, Mini Movie, ZenCircle, ZenSync, Weather, Do It Later, Game Genie, ZenFone Care, and Cover. There are also some third-party apps including Amazon Shopping, Saavn, TripAdvisor, Instagram, Amazon Kindle, and Facebook. Many of these could have been done away with.

Asus ZenFone 3 Laser camera
The camera app on the ZenFone 3 Laser launched quickly even from the lock screen. The interface is easy to understand. Users can choose Manual, HDR Pro, Beautification, Super Resolution, Low-light, QR Code, Night, Depth of field, Effect, Selfie, GIF animation, Panorama, Miniature, Time rewind, Slow motion, or Time Lapse. It's worth noting that all these modes are consistent across the ZenFone 3 range.

One of the most hyped features of this phone is its laser autofocus technology which claims to locks focus in just 0.03 seconds. During our review, we found that this feature really did work pretty fast. The laser autofocus plays a major role when taking close-up shots.

The camera on the ZenFone 3 Laser can take some amazing photos with a good amount of detail and decent colour reproduction in well-lit conditions. On zooming in to images, we detected slight noise and grain in the corners. We were especially impressed with low-light shots taken by the ZenFone 3 Laser, which are good even though there was some grain and oversaturation at times.

We tried recording 1080p videos on the ZenFone 3 Laser and the results were great. The electronic image stabilisation (EIS) feature came in handy while recording videos, making them clean even when our hands weren't steady.

The front camera is also decent and takes selfies quickly. On opening the front-facing camera, the ZenFone 3 Laser automatically launches Beautification mode, though users can disable it. In our opinion, this phone is decent for everyday pictures.

Asus ZenFone 3 Laser performance
The Asus ZenFone 3 Laser manages does a good job of multitasking, but did slow down a bit with lots of apps open in the background. Watching movies is pleasant thanks to the display quality. We didn't face any heating issues except for it getting slightly warm when charging, gaming, and recording videos at 1080p. Similar to other metal-bodied devices, the ZenFone 3 Laser can get slippery, especially with sweaty hands. During our review, the ZenFone 3 Laser slipped out of our hands a couple of times, but thankfully no damage was done to the unit.

The fingerprint scanner responded well during our usage and was quick at times. The phone can unlocked with a fingerprint even when it's in standby, which is convenient. The omission of a USB Type-C port is one thing that seems dated about this phone. The speakers are loud enough, and the bundled earphones are decent for music quality with minimal distortion at higher volumes.

The Asus ZenFone 3 Laser turned in passable scores when we ran usual suite of benchmark tests, with 43,140 and 23,956 in AnTuTu and Quadrant respectively. GFXBench and 3D Mark Ice Storm Extreme returned 15fps and 5,570 points respectively.

Verdict
Asus has gambled a little by pricing the ZenFone 3 Laser at around Rs. 20,000. Xiaomi's Redmi 3S and Redmi 3S Prime (Review) are powered by the same octa-core Qualcomm Snapdragon 430 SoC, and are priced below Rs. 10,000. Performance in benchmarks is below that of other phones we have seen at the ZenFone 3 Laser's price level.

Recommending this phone therefore becomes tough. Competitors such as the Samsung Galaxy J7 Prime (Review) and Lenovo Z2 Plus (Review) offer better value for money in terms of overall performance. The ZenFone 3 Laser's camera does stand out, but it cannot justify such a high price premium. Considering that this phone also has a metal body, decent screen, and software enhancements, a price of Rs. 15,000 or less would be much more appropriate.

For those interested, the Asus ZenFone 3 Laser (ZC551KL) is now selling on Flipkart, where it will be exclusive for a month before becoming more widely available.