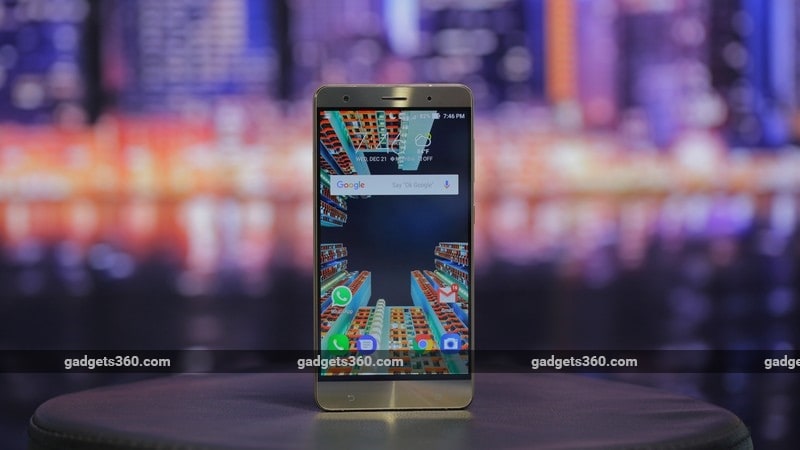 Asus seems to have saved the best for the end of 2016 -  it only recently began selling the ZenFone 3 Deluxe in India. This is its latest flagship offering, with all the bells and whistles you'd typically expect from an Android flagship. We recently reviewed the ZenFone 3 Ultra (ZU680KL), which despite its high-end pricing, isn’t really at the same level when you consider its specifications.

What we have on test today is the top-end version of the Deluxe, which features a very generous 256GB of storage and the top-of-the-line Qualcomm Snapdragon 821 SoC. At Rs. 62,999, the ZenFone Deluxe has the Google Pixel series and Samsung’s Galaxy S7 series as competition, which is not an easy crowd to go up against. Is the ZenFone 3 Deluxe a convincing enough package to make you look beyond the obvious choices? Let's find out.

Asus ZenFone 3 Deluxe (ZS570KL) design and build
The ZenFone 3 Deluxe has many firsts to its name but the one that grabs our attention is the invisible antenna design. For a unibody metal smartphone, this is quite an achievement considering most other flagships, including the iPhone 7 and Pixel, have visible antenna bands around the back. Asus seem to have found a way to circumvent this aesthetic problem without compromising on signal quality. You can still see bits of radio-friendly material embedded into the chamfered bezel, but they're barely visible.

The rounded sides and slightly curved back offer good ergonomics when you hold this phone with one hand. It feels really light too, and the matte finish on the back doesn’t attract fingerprints. There’s also Asus’s trademark ‘spun metal’ design on the top and bottom of the front side.

Asus has gone with a 5.7-inch Super Amoled display with a full-HD resolution. While the pixel count is still a respectable 386ppi, we feel that a Quad-HD display would have been the ideal choice for a phone of this calibre. Nevertheless, we like the fact that the narrow bezels make this phone only slightly larger than a Google Pixel XL. Colours are nicely saturated and brightness is very good. You also have an option to tweak the colours and the colour temperature in the Settings app.

There’s a USB Type-C port at the bottom and a speaker grille beside it, while the 3.5mm headphone socket is placed on the top. The ZenFone 3 Deluxe has a hybrid SIM slot with 4G support. Around the back, there’s a slight bump for the camera, and a rectangular cut-out for the fingerprint sensor. The sensor works well in terms of authenticating you, but its awkward shape causes occasional failed attempts if your finger isn’t aligned well.

The ZenFone 3 Deluxe ships with a Quick Charge 3.0 compatible power adapter, Type-C cable, ZenEar S headset, SIM ejector tool, and warranty information. The packaging feels premium and the quality of the accessories are very good too. Overall, the Deluxe is a stylish and very well-crafted smartphone that’s pleasantly light for a phone of its size. Our only niggle here is with the shape of the fingerprint sensor, which we didn’t find conducive enough for easy unlocking.

Asus ZenFone 3 Deluxe (ZS570KL) specifications and features
Asus sent us the 256GB version of the ZS570KL, which is powered by Qualcomm’s Snapdragon 821 SoC and has 6GB of RAM. On the other hand, the 64GB version of the ZS570KL is powered by the older Snapdragon 820 chip but the rest of the specifications and features stay pretty much the same. Other connectivity features include a dual-band Wi-Fi ac with 2x2 MIMO support, Bluetooth 4.2, GPS, NFC, USB OTG and FM radio. Currently, VoLTE isn't supported so you won't be able to make voice calls over Jio. However, Asus say that this will be fixed in an upcoming update.

The phone puts up a good show in benchmarks, although the OnePlus 3T still manages to nudge past it in most tests. AnTuTu returned a score of 155,041 while 3DMark Unlimited gave us a score of 30,100. All the numbers point to very good performance, which is also reflected during actual usage.

On the software side, we have the familiar ZenUI 3.0 skin running on top of Android 6.0 Marshmallow. The software tweaks are similar to what we’ve already seen on the ZenFone 3 Ultra and the ZenFone 3 Max (Review). As we’ve stated countless times, ZenUI simply feels too cluttered, and might be overwhelming for first-time Asus users. We appreciate the amount of customisation available but it also feels a bit unnecessary. The bundled apps include Puffin, Truecaller, Amazon Kindle, SimCity and Need for Speed: No Limits. There are plenty of apps from Asus too, including PhotoCollage, MiniMovie, ZenCircle, etc, which you cannot uninstall even if you don't need them.

The Settings app gets some additional features like OptiFlex, which can speed up the launch performance of up to 10 apps. However, we didn’t really notice any difference with it enabled. ZenMotion lets you set touch and motion gestures, including a quick toggle for one-handed mode by double-tapping the home button. The Deluxe also gets an ‘Always-on’ display feature which lets you set an analogue or digital clock as a screensaver. Panels display information about missed calls, messages, battery status, and the date. However, they’re not as slick as the always-on panels of the Samsung Galaxy S7.

Asus ZenFone 3 Deluxe (ZS570KL) performance
Our experiences apply to the high-end model with the Snapdragon 821 SoC. The phone performs very well in everyday tasks, despite its heavy skin. Scrolling through menus is smooth, without any hint of stutter. We didn’t find the stock ZenUI keyboard to be very good due to the annoying delay while typing, but Google's Gboard can come to the rescue here. The display’s touch response is very good too. The phone does heat up if you use the camera a lot but not to the point where it’s uncomfortable to even hold it.

The ZenFone 3 Deluxe handles multimedia playback very well too. All our high-bitrate full-HD and 4K video files played flawlessly. The vivid display makes watching movies enjoyable. Audio quality is especially good. There’s only one speaker but the sound is amplified so it’s much louder than your average smartphone. Asus’s AudioWizard app lets you tweak audio settings on a global level.

The Deluxe also supports high-resolution audio through the headphones socket, which the bundled ZenEar S headset handles pretty well. This headset features 10mm drivers that take good advantage of the phone's built-in DAC. The headset favours high frequencies more than mids or lows, which can sound a bit too sharp for some. However, they are comfortable to wear even for long durations. You get an in-line microphone but no volume controls, which is disappointing.

The ZenFone 3 Deluxe packs a 23-megapixel rear sensor with four-axis OIS and electronic stabilisation. There’s also laser autofocus in conjunction with PDAF to help get faster locks on your subjects. In reality, this worked well in daylight as well as low light, and we never faced any focus hunting issues. Continuous autofocus also means that the device can switch focus between subjects as you change the frame. Image quality is very good in daylight shots, resulting in detailed landscapes and macros. Colours are captured accurately and the sensor delivers a good depth of field effect in close-up shots. We didn’t find the ‘Auto HDR’ feature to work too well, and we often had to switch to HDR manually as it wouldn’t kick in.

The camera app has a ton of shooting modes, including Super Resolution, Manual, and Panorama. Low-light photography is very good as fair bit of details are preserved and noise is controlled. It’s not as good as the Pixel XL or Galaxy S7, but it's close enough. The front camera does an excellent job of capturing detailed selfies even in indoor lighting. Video recording maxes out at 4K 30fps but you also have the option of shooting at 1080p 60fps and slow-motion. The quality of recorded video is very good, and the framerate is stable.

The 3000mAh battery can easily run for about a day and a half with regular usage. In our HD video loop test, we managed to get 12 hours and 33 minutes of runtime, with the power mode set to ‘Normal’. When switched to ‘Performance’ mode, we got just 8 hours and 13 minutes. In this mode, we didn’t notice any major performance improvements in apps and none of the benchmarks revealed any benefit either, so it’s best to stick to the ‘Normal’ mode. Since the phone supports Quick Charge 3.0, we were able to get to 65 percent charge from bone-dry in just 30 minutes.

Verdict
This special edition ZenFone 3 Deluxe is priced at Rs. 62,999, which makes it a good flagship contender. It’s also the only Android option to offer this much onboard storage plus the ability to expand it further. With streaming services like Netflix and Amazon Prime Video now supporting offline viewing, it doesn’t hurt to have more storage.

While the ZenFone 3 Deluxe is a very good flagship, we wish Asus would ease up on the custom treatment of Android, as it can be a little too intrusive at times. We would have liked to see a better designed fingerprint sensor, plus we think a Quad-HD display would have been more appropriate for such a high-priced phone.

If a good camera is what you’re after, then we recommend looking at the Google Pixel or Samsung Galaxy S7 series, which are a notch better than the Asus. If you want a little bit of everything without emptying your bank account, then there’s always the OnePlus 3T.