Asus Fonepad 7 Dual SIM Review: A Blast From the Recent Past 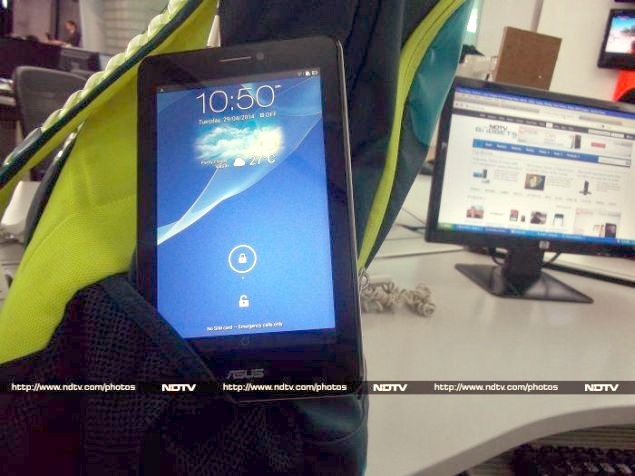 The 7-inch tablet category has lately been seeing an influx of options with voice-calling capabilities. Buyers seem to be toying with the idea of screens bigger than phablets, even if such devices make them look ridiculous while making calls. We've seen quite a few people in the wild using Samsung Galaxy Tab 2s and 3s stuck to their faces. We are trying to recollect if we actually got to see their faces, though. Thankfully, others use wired/Bluetooth headsets for making calls.

Asus is making the most of this trend by launching Fonepad variants left, right and centre. In a little more than a year, the Taiwanese technology major has launched three Fonepad tablets - all of them featuring SIM card support and voice calling. The latest one is the Fonepad 7 Dual SIM. Now, buyers can make phone calls on two networks instead of one.

The updated Fonepad 7 Dual SIM has the same specs as its single-SIM sibling. Read our review to find out what's changed, and if the changes are good. 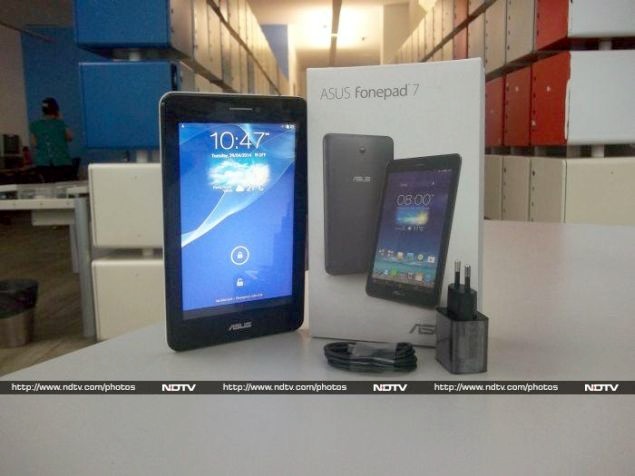 Look and Feel
The Fonepad 7 Dual SIM has quite a few differences in the design department when compared to the Fonepad 7. It is slightly heavier, at 340g, and slightly wider and thicker too. The dual front-firing speakers have been replaced by a single speaker grille on the lower back of the device. The back features the same white plastic panel which is really glossy, reflective and attracts smudges easily. The camera is, however, not protruding this time.

The bare front of the Asus Fonepad 7 makes way for an Asus logo below the screen on this device. The right edge features the volume rocker and power button - both made of plastic. On the top, we have the Micro-USB port and 3.5mm headset jack. The plastic is slippery and we were forced to use two hands for operating it most of the time. 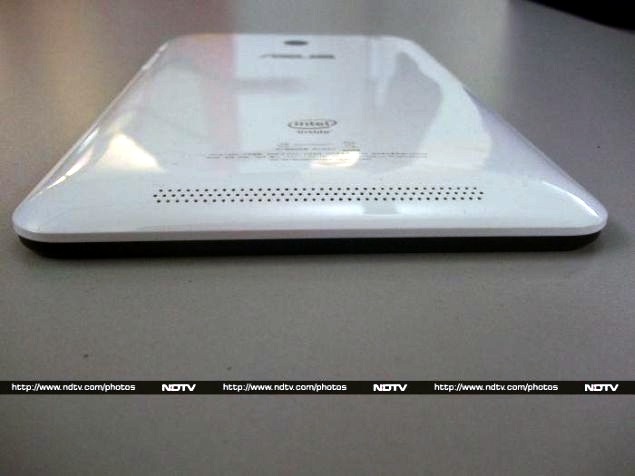 Features and specifications
The Fonepad 7 Dual SIM has a 1.2GHz dual-core Intel Atom Z2520 dual-core processor under the hood. Apart from this it has 8GB of internal storage of which approximately 5GB is available for the users to install apps and copy content. We have to make a mention of the fact that unlike other companies, Asus specifies this explicitly on the back of the box. Furthermore, users can expand the storage up to 64GB by inserting a microSD card, and Asus also provides 16GB of cloud storage for a year on its own cloud platform.

The 5-megapixel rear camera can shoot videos at 1080p, and for users who like taking selfies the Fonepad Dual SIM has a 1.2-megapixel front-facing camera which can capture videos at 720p resolution. Both the SIMs can operate on the 850/900/1800/1900 bands. The device also has Bluetooth 4.0, a gyroscope and proximity sensor. 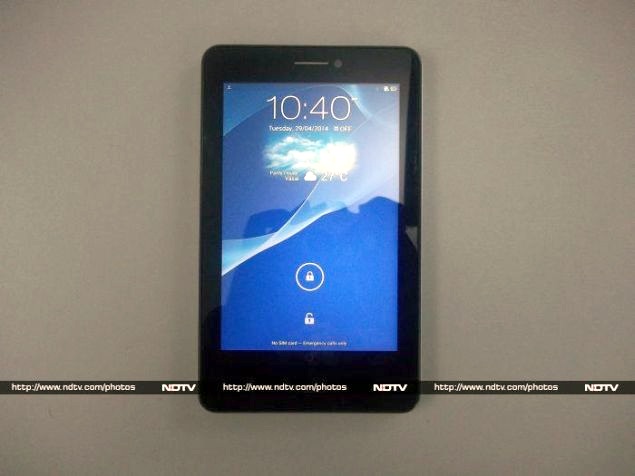 The 7-inch screen has a resolution of 1280x800 which is the same as both the Fonepad 7 and the original Fonepad. The screen is highly reflective and susceptible to smudges just like the back. Viewing angles are okay but legibility is not great under sunlight. On the whole, we actually liked the crispness of the screen despite its low density of 216 ppi.

Software
One look at the software and we were immediately transported back to November 2013 when we reviewed the Fonepad 7. Despite running Android 4.3 as opposed to Android 4.2.2 on the Fonepad 7, the skin is exactly the same. The only difference is that some third-party apps have been been dropped, which is good. We love it when manufacturers reduce bloatware. 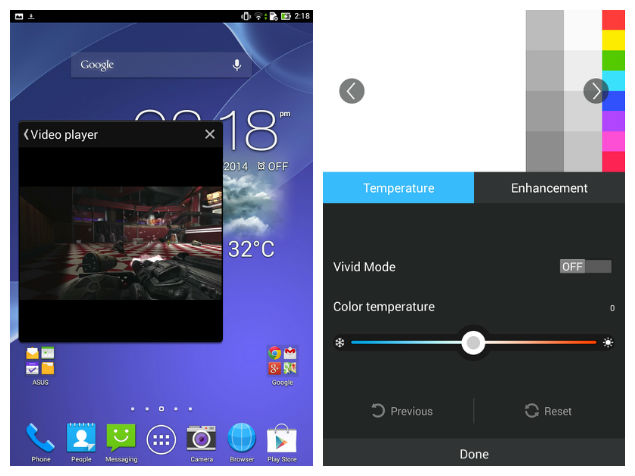 Asus adds a fourth button to the standard three-button Android setup, which opens 'floating apps'. Floating apps or widgets are nothing but apps that can be opened in a smaller window size to to allow multitasking across all the real estate that a 7-inch screen offers. Audiowizard is a barebones app that lets users choose from a set of modes which we presume are equaliser presets. Asus calls its screen enhancement tech Splendid, and there's an app of the same name that lets users tweak colour settings to their liking.

The rest of the apps bundled with the Fonepad 7 Dual SIM are Amazon Kindle, Zinio and a few other Asus branded apps. 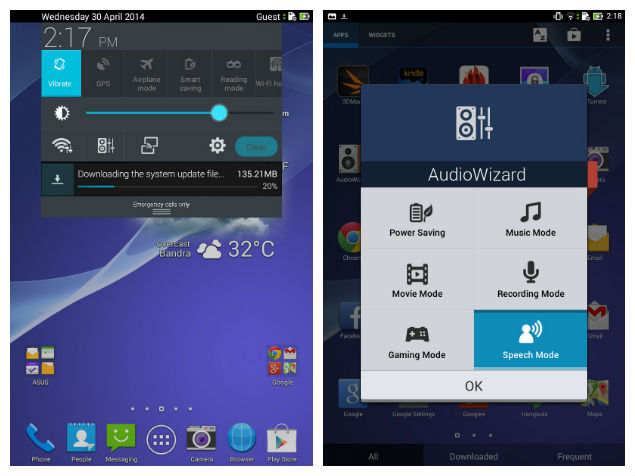 Camera
Asus has a proprietary camera app that allows users to change manual settings such as ISO, exposure value and white balance. It also has a severely limited set of four effects that one can apply.

The 5-megapixel camera on the Asus Fonepad 7 Dual SIM is a mixed bag. Focusing is slightly erratic but once focused, the camera manages to capture images really quickly. The details captured by the camera are great but the colour seems to be slightly off. The camera has a problem with the auto white balance feature. We suggest changing the white balance manually to suit conditions. If used with patience, the Fonepad 7 Dual SIM can indeed capture some good images, especially close-ups. 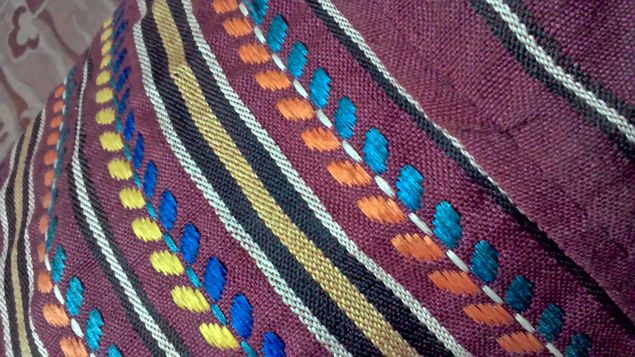 Thequality of captured video is not that great despite the 1080p resolution. The front camera takes just about serviceable photographs.

Performance
The Asus Fonepad 7 Dual SIM is one of the few Android tablets in the market to feature a hyper-threaded Intel processor under the hood. In day-to-day usage, the tablet performed really well and felt extremely snappy to use with nary a lag.

We want to present a few numbers confirming the claims. The AnTuTu and Quadrant benchmarks returned scores of 15,127 and 5,940 respectively, which are respectable results. The GFXbech test threw up a result of 9.9 fps which is neither good nor bad, and similarly, the 3DMark Ice Storm scenario had a final score of 4,994. 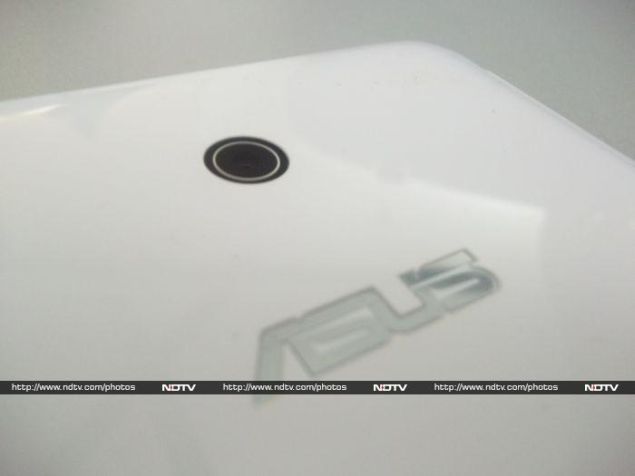 The Fonepad 7 played video files encoded at any resolution without any hiccups. Complementing this great video performance is the audio performance. We tested the audio playback on our reference earphones considering Asus doesn't bundle any in the box, and we found the sound quality to be really good. The only blot on the otherwise good scoresheet of the Asus Fonepad 7 Dual SIM is the average sounding speaker. This is a setback considering the front-firing speakers were really good on theolder model .

In our battery tests, the tablet lasted us a good 9 hours, 23 minutes before we had to charge it. This bodes well for the battery life of the device and we expect it to last at least two full days with heavy usage. The call quality on the device is great too (yes, we used a wired headset for phone calls) with absolutely no problem in latching on to networks. 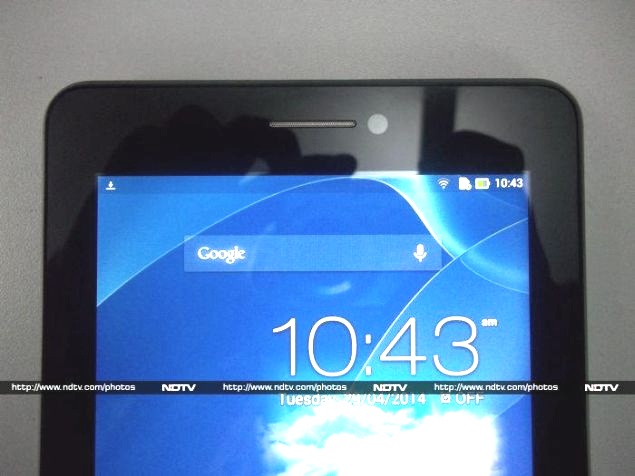 Verdict
Surprisingly, with a price of Rs. 12,999, the Asus Fonepad 7 Dual SIM is in fact cheaper than its elder sibling. The increased girth notwithstanding, it has all the features that you would expect from a tablet in this price range - a good screen, great media playback, respectable battery life, lag-free performance and a decent camera too. We can't find much fault with the device and Asus seems to have hit the bullseye with this one. Other options available in this price range are the Samsung Galaxy Tab 3, HP Slate 7, and Lenovo IdeaTab A3000.