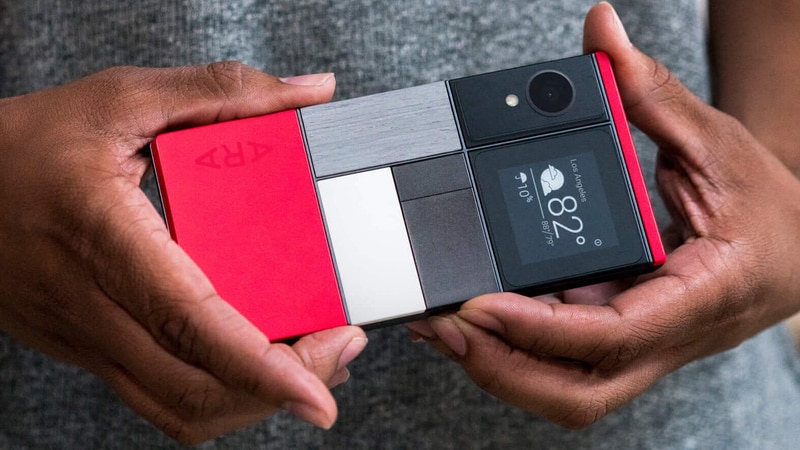 The common complaint heard these days with gadgets - and smartphones in particular - is that there’s a lack of any true innovation. Phones today look more similar than ever before, monoliths carved out of glass and aluminium. Because of tightly-packed hardware that allows them to be thinner and lighter, many phones have lost even basic features, such as a replaceable battery, and even the 3.5mm headphone jack in recent times.

What if, like the good old desktop computer, other gadgets too were made up of easily pluggable components, that could be replaced individually, instead of replacing the entire product every few years? That's the premise behind modular hardware, but although people keep trying to make it happen, there's little reason to believe it actually will.

The idea isn’t new, but has certainly evolved with time. Back in 1999, Handspring made Personal Digital Assistants that had a Springboard Expansion Slot, used to attach modules that added features like GPS, a camera, RFID, or barcode scanner. Sony Ericsson’s phones from 2002 such as the T68i and T300 too were compatible with an attachable accessory that added a camera to these phones.

Next came Modu, a mobile phone released in 2007 that brought the idea of easily swappable ‘jackets’, which would either change the appearance of the phone or add additional functionality, or both. For instance, there was a ‘Boom Box’ jacket that added stereo speakers, a ‘Storage Jacket’ that added added a male USB port to directly attach to a computer.

It even partnered with Micromax to bring the modular phone to India in 2010, which had a ‘camera jacket’.

But all these additional features quickly got integrated into smartphones, as features like cameras, GPS, stereo speakers, etc gained importance over time. By 2011 Modu had shut operations and sold its patents to Google.

In 2013, the idea of modular hardware again caught eyeballs, as a concept called Phonebloks went viral, with many rallying up towards a modular phone future. The then-Google-owned Motorola even acknowledged the concept as it unveiled Project Ara, finally giving modular phone fans their brightest ray of hope.

Project Ara was basically a real-life version of Phonebloks, where endoskeletal frames called ‘endos’ held together everything from the display module, to the ones containing the battery, chipset, camera, and more. The endos came in three sizes - mini, medium and large. Apart from being able to upgrade the phone’s basic hardware at any point of time, there was also talk of specialised modules like medical devices, pico projectors, night vision sensors, game controllers, etc.

After years of iterations and a failed first bootup in 2014, Project Ara by 2016 changed vastly, with many of the core components like the battery, display, and system-on-chip becoming non-replaceable. Ultimately, the project was killed by the end of that year.

Around the same time as Project Ara, there were two other projects that took a slightly different approach to modularity. Instead of swapping out every component for a new one to add functionality, the pitch was easy repairability and creating a positive social change.

Amsterdam-based Fairphone started its work in 2013 and produced two phones, the newest of which (Fairphone 2) scored a 10/10 repairability score by iFixit, with the spare parts being easily available for purchase on its website. As of today, the Fairphone 2 sports an ancient, 2014-made Qualcomm Snapdragon 801 chip and runs Android 5.1 Lollipop, which was released the same year as the chipset. It can be preordered today for 529 euros (roughly Rs. 37,000), though it doesn’t sound like a good purchase, to say the least.

Another Finland-based company, called PuzzlePhone, in 2014 made a product with three easily-replaceable parts - dubbed the Brain, Spine, and Heart. The brain consisted of essentials such as the CPU, RAM, internal storage and cameras; the spine had the display; and the heart contained the battery. On its blog post, the company shared that due to financial troubles, it couldn’t ship the phones in 2016, though it's still trying to ship this year.

While attempts like Project Ara were closer to the true modular phone dream, there were some subtler attempts made by LG and Motorola in 2016, with the LG G5 and Moto Z respectively. The LG G5 had a removable battery module, which could be replaced with attachments called ‘LG Friends’. These included a pro-camera module and a DAC made by Bang and Olufsen. The Moto Z had magnetically latching ‘Moto Mods’, which ranged from camera-centric accessories made by Hasselblad, to speakers and battery packs.

As of today, LG is said to be removing modular functionality from the successor to the G5. Motorola's next phone might also drop mods, though at least the Moto Z is supposed to continue supporting mods in next year's model.

Modular isn’t restricted to the smartphone category too - a company called Blocks started its Kickstarter campaign in October 2015 to make a smartwatch with modules that could be coupled together as part of the wrist strap. Last we heard, the shipments of the product had been delayed more than once, finally pushed to December 2016. We’re in January 2017 already and there appears to be no word on the progress.

The interest in modular devices was also evident at this year’s CES 2017 - where Intel announced the Compute Card, a credit-card sized standard for plug-and-play computing hardware, which can be easily replaced in appliances like smart refrigerators, smart kiosks, security camera setups, and so on.

Similarly, Xiaomi said its Mi TV 4's computing hardware (presumably, the system on chip) would be upgradeable after it becomes obsolete after a few years, without having to change the entire TV.

These ideas sound interesting, but even a cursory reading of the history of modular attempts is enough to make you cynical. If you’ve read all the documented attempts at making modular gadgets, you will want to take anything in the future that has the words ‘modular’ in it with a pinch of salt.

No matter how much fans want a world where their gadgets are easily upgradeable like desktop computers, there are physical, technological, and economical limitations that have kept this from becoming mainstream.

For example, can the individual modules be small and strong enough that the overall size of a modular smartphone is comparable to the dimensions and durability of today's typical smartphone? As of now, that's not the case. And what happens when users are given the freedom to upgrade individual components that may not play nicely with the rest of the setup? What if a hypothetical 4K display module or a dual camera setup was put on a phone whose processing power is not up to the task? You would have to upgrade some other modules to support the display. At which point, wouldn't it not be a cheaper proposition to buy a new phone instead?

Next is also the question of compatibility - remember how when you put a new graphics card in a computer, you have to install drivers given by the manufacturer? Will modular component makers support all the fragmented versions of Android in use by making their components compatible with all of them?

Then comes question of economics - will manufacturing, selling and supporting these modules be a profitable business? Can the modules be cheap enough to be affordable for most consumers? You can buy a good smartphone for well under Rs. 10,000 today - can these modular components offer competitive pricing?

Lastly, comes the question of interoperability. None of the examples above had modules that were interoperable with other manufacturers. In a desktop computer, a graphics card made by Zotac works with a motherboard made by Asus, because the PCIe slot is standardised. Unfortunately the same isn’t the case with modular gadgets (at least until now) because one standard isn’t implemented by multiple makers.

Manufacturers have spent many decades trying to answer these questions. Clearly (and unfortunately), they haven’t been able to make any meaningful impact yet, and it doesn't look like there's going to be one anytime soon.