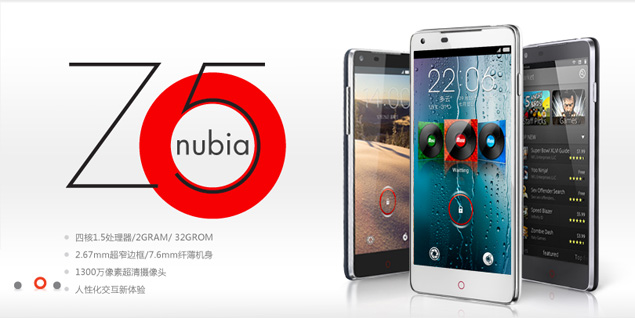 We've reported earlier about ZTE's plans to launch two phablets this year and the company is now a step closer to accomplishing those plane. The Nubia Z5 has now been officially announced by the company. The Black and White models of the device will go on sale in China beginning January 2013 for 3,456 yuan (about $555 US). There is no word on availability in other regions as of now.

The Nubia Z5 comes with Android 4.1.1 and touts impressive hardware. The device sports a 5-inch (1920x1080 pixels) IPS display and features a huge 13-megapixel rear camera and a 2-megapixel front facing one.

Rumour has it that apart from the black and white models, there is a third model expected to be revealed later. There aren't any other details except that it is likely to be a titanium version and may be priced at 7,890 yuan (around $1,265 US).

ZTE is also expected to unveil a second 5-inch full-HD device at CES 2013 in Las Vegas. A press shot of the Grand S was leaked 3 days ago with very less details known about the phablet.