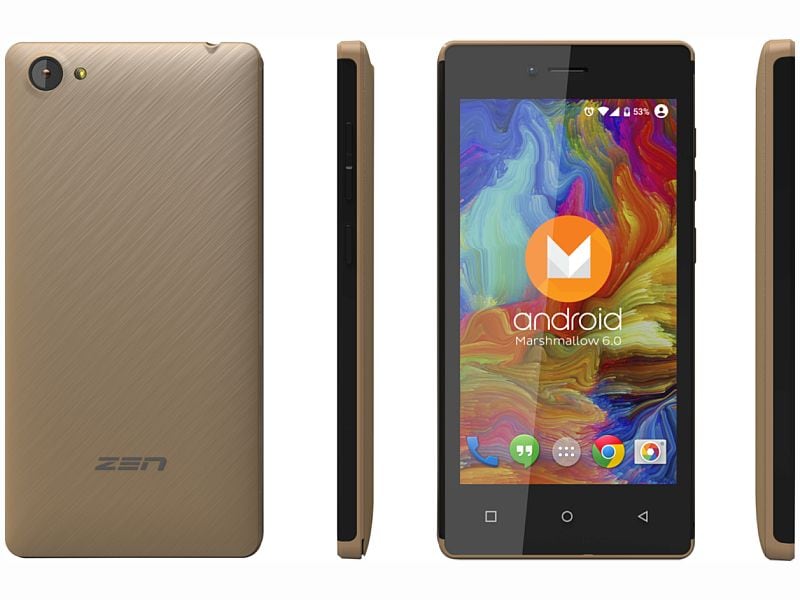 Zen Mobile on Monday unveiled its new budget smartphone, the Admire Star, priced at Rs. 3,290. The domestic handset company with its latest smartphone is targeting the Tier-II and Tier-III Indian markets. One of the biggest highlights of the handset is it packs SOS feature that allows users to quickly send their location to five pre-defined numbers in case of emergency.

The Zen Admire Star features a 4.5-inch FWVGA (480x854 pixels) display and sports a pixel density of 218ppi. The Android 6.0 Marshmallow-based handset comes with dual-SIM (GSM+GSM) support and is powered by a 1.3GHz quad-core processor coupled with 512MB of RAM. The Admire Star sports a 5-megapixel rear camera with LED flash and also packs a 1.3-megapixel front camera.

The smartphone comes with 8GB of inbuilt storage that's expandable via microSD card (up to 32GB). The Admire Star sports a 2000mAh battery rated to deliver up to 6 hours of talk time and up to 200 hours of standby time. Connectivity options include GPRS/ EDGE, 3G, A-GPS, Bluetooth, Wi-Fi 802.11b/g/n, and Micro-USB. The smartphone will support 3G on one SIM and GPRS/ EDGE on second.

Announcing the new smartphone, Sanjay Kalirona, CEO, Zen Mobile said, "We are helping a large part of the population to upgrade their lifestyles with our smartphone - Admire Star. The smartphone offers high end features, powerful battery and enhanced multimedia experience at an exceptionally competitive price. At Zen Mobile, we are constantly working towards fulfilling consumers' dreams and desires. I am confident that our new addition, Admire Star, is going to be a formidable proposition with the offered features at this price point."