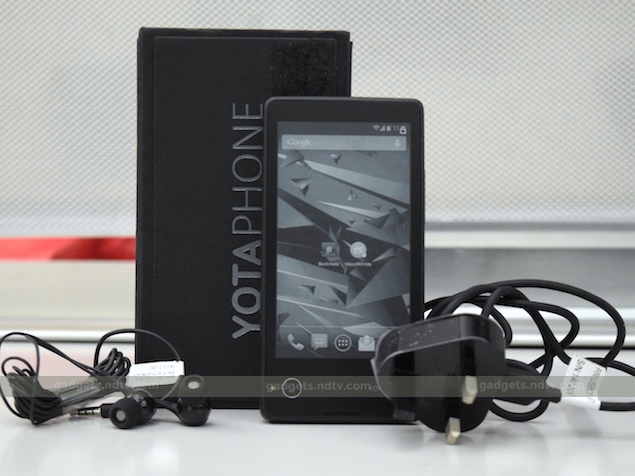 The first-generation YotaPhone has received yet another price cut in India, making Rs. 10,500 cheaper than its launch price. Exclusively available at Flipkart, the smartphone is now priced at Rs. 12,999.

The dual-display YotaPhone (first-generation) was launched in October last year at Rs. 23,499. As soon as November, the company had slashed the price of YotaPhone to Rs. 17,999.

The first-generation YotaPhone features a 4.3-inch HD display; a 4.3-inch E-Ink display with 360x640 pixels resolution; a 1.7GHz dual-core Snapdragon 400 processor, and is based on Android 4.2.2 Jelly Bean. Other specifications include 2GB of RAM; 32GB inbuilt storage; a 13-megapixel rear camera; a 1-megapixel front camera, and a 1800mAh battery.

Last month, Yota Devices announced the availability details of YotaPhone 2 for the European market. The company revealed that the YotaPhone 2 will go on sale in Russia at RUB 33,000 (approximately Rs. 37,500).

The company further added that the YotaPhone successor will be available in 20 European markets by the end of 2014, and will head to China and rest of Asia Pacific in early 2015.

The YotaPhone 2 features a 5-inch full-HD (1080x1920 pixels) AMOLED display offering a pixel density of 442ppi. It sports a 4.7-inch e-paper display with qHD (540x960 pixels) resolution. Notably, the smartphone boasts of Corning Gorilla Glass 3 protection on both the dual-screens.

Other specifications of the YotaPhone 2 include a quad-core Qualcomm Snapdragon 800 processor clocked at 2.2GHz; 2GB of RAM; 32GB of in-built storage (non-expandable); an 8-megapixel rear autofocus camera with LED flash; a 2.1-megapixel front-facing camera; a 2500mAh battery, and Android 4.4 KitKat.