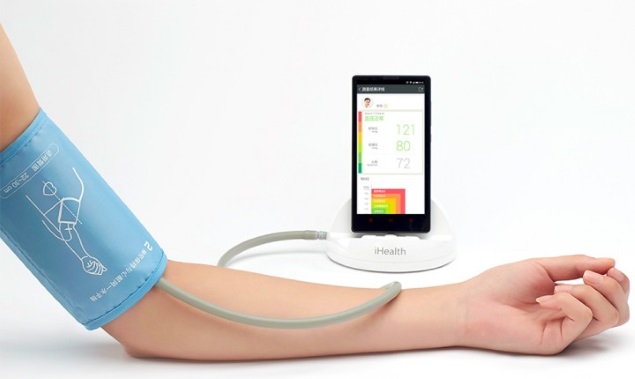 Xiaomi on Wednesday launched a smartphone dock which will work as a health station for monitoring blood pressure and heart rate.

The Chinese company has notably announced the new smartphone dock in partnership with iHealth Labs. The company reportedly had invested $25 million in iHealth Labs earlier this week.

The Next Web reports that the smartphone dock will go on sale in China exclusively via Xiaomi's official site at CNY 199 (rough Rs. 2,000).

The smartphone dock from Xiaomi, built in partnership with iHealth Labs, can measure blood pressure including both systolic and diastolic pressures, alongside tracking the heart rate of the user. The report notes, "The dock includes an attached pad which is simply attached to a person's arm, as happens in a hospital, to get things going. The app is then used to operate the device."

Further, Xiaomi stressed the fact that the new smartphone dock from Xiaomi is easy to use and is ideal for even elderly customers. Notably, the results of blood pressure and heart rate can be shared with others via the companion app.

For now, the new smartphone dock is said to be China exclusive as there is no word from the company on a launch outside the country.

Tech in Asia quotes a Xiaomi spokesperson, who said, "The blood pressure monitor can be used on other Android devices, but it is best suited for Xiaomi smartphones."

Xiaomi had marked its first move to health-related gadgets back in July when the company launched its Mi Band alongside the company's flagship smartphone, Mi 4.

Asphalt Overdrive Now Available to Download for Android and iOS
Oppo Teases Use of Lithium, Other Light Metal Elements on N3 Smartphone