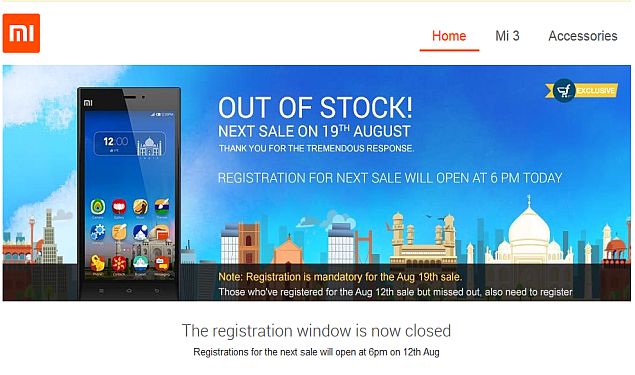 With 20,000 units sold in 2.4 seconds, the Xiaomi Mi 3 is clearly still in heavy demand for people looking to buy an Android phone in India, despite the waves of Twitter rage that follow each flash sale the company holds. Go to the company's official Facebook page and you see angry comments after each post about the sales, as people tried, but were unable to buy the phone.

Tuesday's sale was no different - despite the larger number of handsets available, there are many angry comments on the Facebook page, and on Twitter. At the same time though, the massive hype that Xiaomi has been able to build through the method of flash sales also seems to be paying off - after the first couple of sales, people were mostly angry, but by now, people have heard about how difficult it is to buy the phone, and come away feeling a sense of accomplishment - over having paid money to buy a phone!

You know that the hype has gotten crazy when people start to use hashtags like #LifeAchievementUnlocked, and write "feeling accomplished" in public tweets about buying a phone.

Finally got the Xiaomi Mi3. This is the closest I'll to get to being one in a million! #LifeAchievementUnlocked

Some people were more amused by things than happy or angry though.

How many phones must Xiaomi make so Flipkart can say "gone in 60 seconds"?

What's particularly funny is the reply which calculates that Xiaomi would need 36,000,000 units in stock, if they were to sell for 60 seconds. Some people who picked up extra units were even tweeting about that, to see if anyone was interested.

I got one extra #xiaomi. Still in Cart. lemme know if anyone wants it

However, a lot of people also felt pretty angry with the company as usual.

Its a touch down b/w irctc and xiaomi on Flipkart. The sale was to start at 2.I solemnly swear to nt try buying again pic.twitter.com/wrb1ZlVxXk

Xiaomi is making Indian sfool..20 k in less than a second...cant believe

It's possible that these people will tweet angrily and then go back to trying to buy the phone again - that's certainly within the realm of possibility. However, at least some of the angry tweeters will move on to other brands, and as we've noted ourselves, there are some really good alternatives in this price bracket, so the flash sales could still backfire on Xiaomi at some point.